Mary Jane and I caravanned out of San Antonio on Tuesday morning on our way to a rally jointly sponsored by the Texas Ramblin' Roses and the Heart of Dixie chapters of RVing Women. We sped through Houston with no problems. We stopped for the night in Beaumont at Gulf Shores RV Park. It's an easy in/out Passport America park with pull-through sites and breakfast. It was an easy few hours to arrive in Henderson and the Cajun Palms RV Resort.

The rally doesn't officially start until Friday but most of us come early. By Wednesday night, there were about 15 women there. We sat around a campfire and visited for a while in the evening getting to know women from the Heart of Dixie. 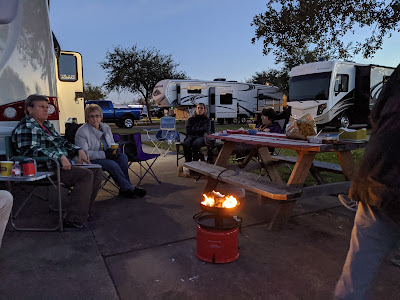 This morning 19 of us headed to Champagne's Swamp Tours. 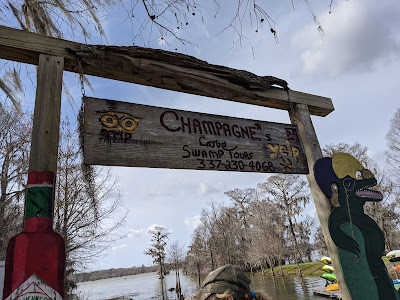 We filled up a whole boat with one empty seat filled by a woman who was learning about the tour prior to becoming a tour guide. She took lots of notes 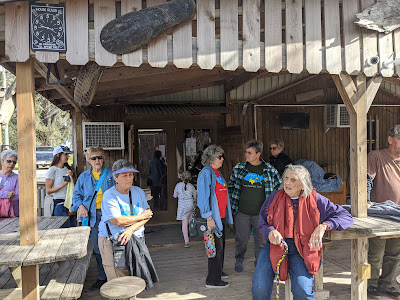 The boat had swivel seats which made it easy to see everything. 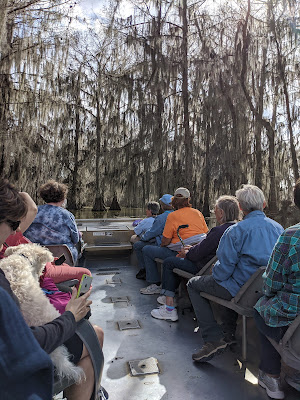 The swamp is not what most people expect. It is not smelly or stagnant. The guide told us that most people believe there are some springs which keep things fresh. First wildlife we came upon was a "bale of turtles". 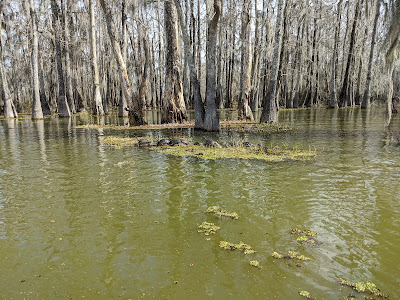 The green on the water is actually thousands of very tiny plants. 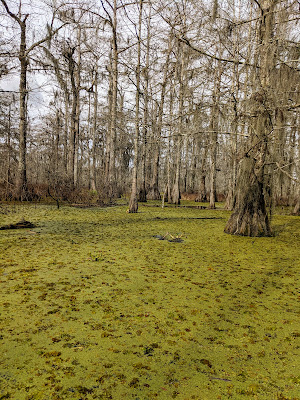 And some areas are really clear and you can see through the water. 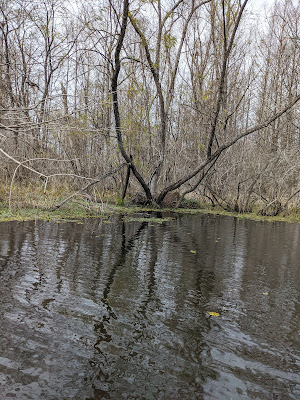 You have to look really hard in the middle of the picture to see "Stella". She frequents this area and has a nest where she had her babies some time ago. There were a couple of babies there too. 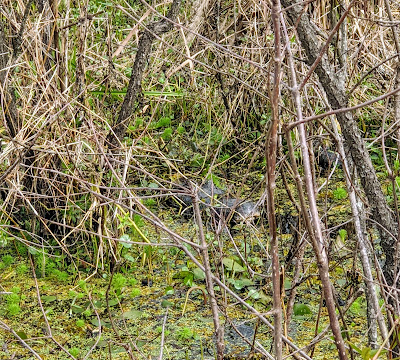 Back on more open water again. We saw lots of birds like anhingas, snowy egrets, and great blue herons. 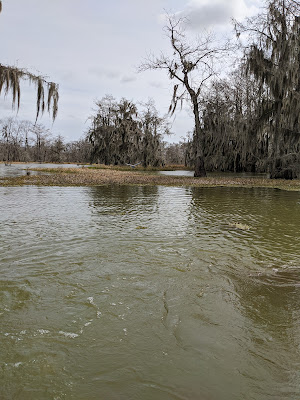 Moss covers most of the trees. 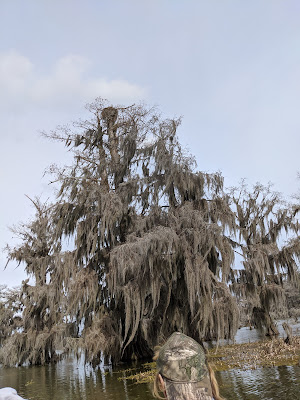 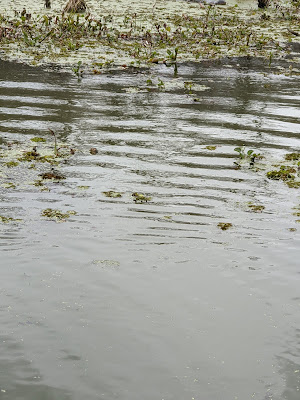 We spotted another larger gator here. The guide said a good way to determine their length is to look at the distance between their eyes to the end of their snout. Each inch is equal to a foot in length. 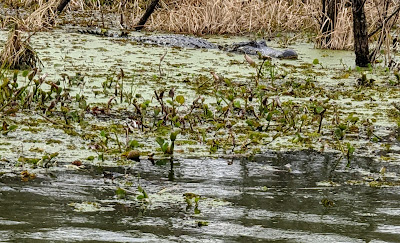 The gators we saw never moved a muscle. 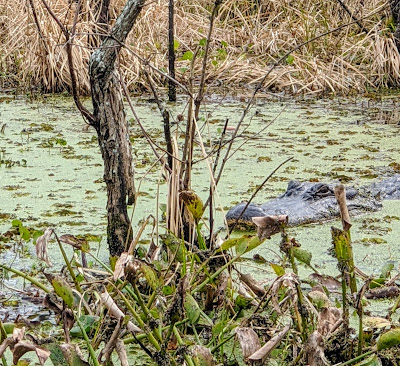 There are actually two gators here. 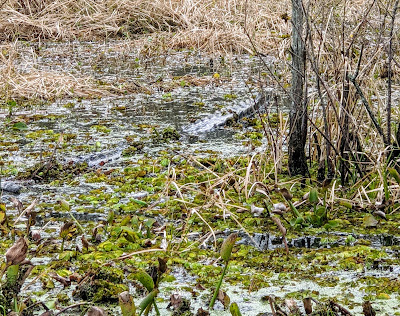 We saw a number of these duck blinds out on the lake part. Those little specks to the left of the blind are actually decoys. There were an amazing number of decoys. The hunters bring their boats into the blind. 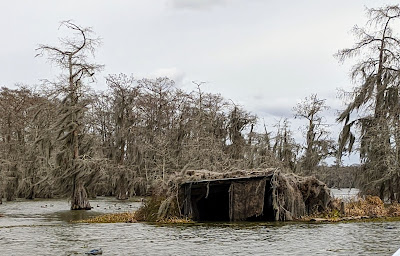 See the big nest on the left tree top? There are a number of nests on the lake which are used year after year. 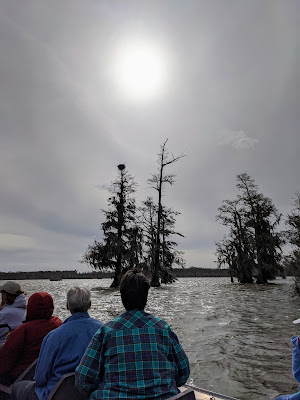 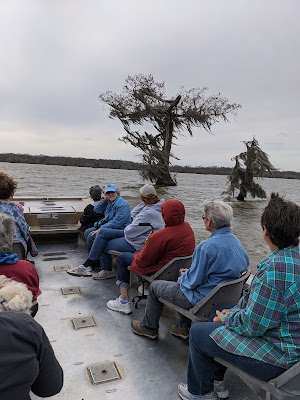 Here we are headed back to the landing after two hours on the lake and in the swamp. It was really a great tour. 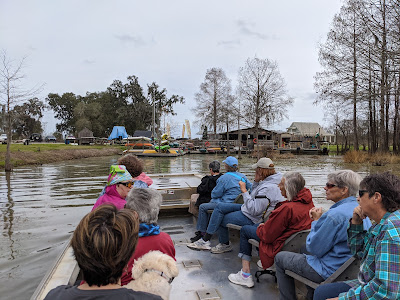 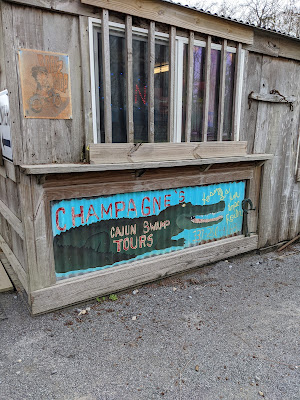 After the swamp tour, we all went to Poche's Market for lunch. It was very good. Later in the afternoon we all gathered at one of the women's rigs. A lot more of the women arrived today. This is part of the group that got together this afternoon. 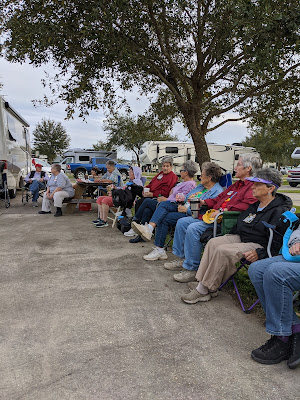