I don't think I mentioned that Helen is a professional triathlete and she was signed up to compete in the AFLAC Iron Girl event scheduled for this weekend.   So we headed up to Atlanta for the big weekend.  Okay, not strictly Atlanta but just northwest of there. Helen had already reserved two nights for us at the resort where the event was scheduled.  We took off after lunch as Helen worked in the morning.


Here we are traveling northward. 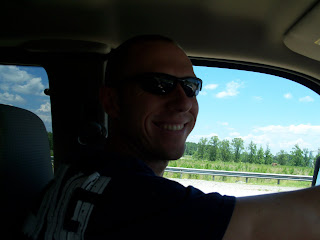 Steve did an outstanding job of driving the rig once his mother was willing to let go of the steering wheel.  He was actually driving when we hit the Atlanta traffic which was fortunately near the end of our drive.  It turned out to be a bit further than I realized and, of course, you go a bit slower in an RV if you don't want it to suck you dry in the diesel department so we arrived a little later than we figured but our reservation was posted on the office door and we got backed in and hooked up without a problem.  The resort was quite posh (as in expensive) but the camping area was pretty much like a decent state park trees and winding roads.

The next day we checked out the resort and spent some time in the afternoon getting Helen all signed in for the big event.  That took a bit of time since there were a lot of participants.  We also figured out the best place for Steve and I to watch all three events.  For those not familiar with triathlons, there is a swim, a bike race, and a run and one of which is enough to do most people in but you have to do them all.  As I said, Helen is a pro.  Early the next morning Helen took off on her bike to get in set up in the bike area.  Steve and I hiked down to the swim area shortly afterward as that is the first event.

Helen and a few other swimmers warm up before the swim portion of the event. 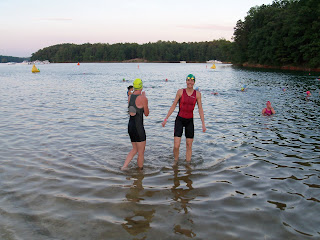 Can you pick out Helen? 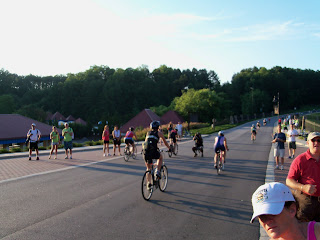 Heading out of the chute for the final event--the run! 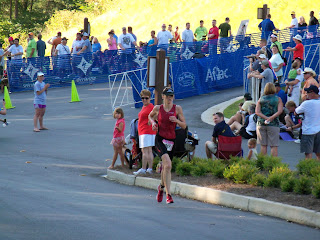 Here's Helen refueling after awards were handed out.  She has so much energy that I get tired watching her. 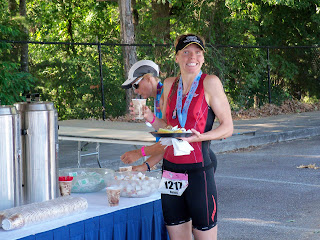 After the events were over, we headed back to the RV and packed up to head back to Panama City.  Helen is also an experienced RVer so she demonstrated proper dumping techniques to Steve. 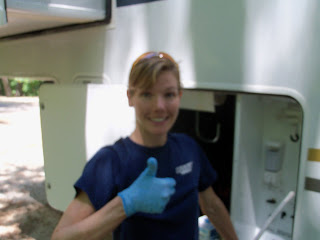 Here we are on the way home.  Helen stretched out in the back seat and even managed to take a little nap after she called her Mom to give her the race results.  Willy, Gretchen, and Harley demonstrated their napping techniques just in case Helen needed some instruction. 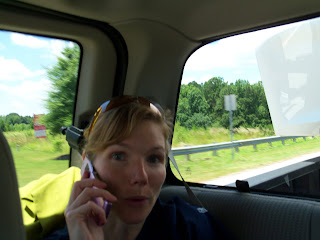 All in all, it was a great weekend of seeing new sights, getting a chance to see Helen in a triathlon, and just enjoying great company.

The kids have a nice house which is actually in Lynn Haven which is pretty much connected to Panama City. 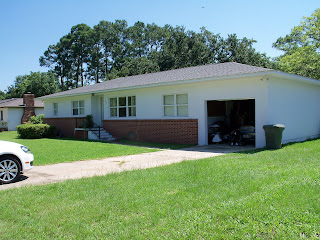 As you can see, the kids have lots of room for the RV and truck and it is an easy pull-in since they live on a corner.  We hooked up electric and I was good to go.  A nearby neighbor told Steve that they had a sewer dump near the street from when they used to have an RV and I was welcome to use it whenever I wanted.  RVs just bring out the "nice" in people. 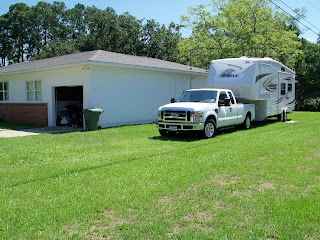 We headed out to a open air concert over in Panama City Beach.  They have lots of things going on over there besides the actual beach.  The mall is a whole open area of shops that includes regular stores as well as beach oriented stores. 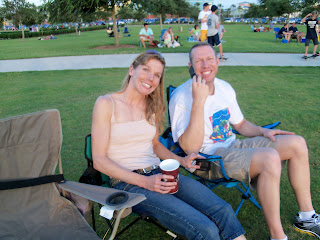 Helen had to work during the week so Steve got his deployment gear stowed away, laundry done, and had a few days to unwind and reenter the "civilian" world.
by TravelingLongdogs Posted 6/22/2010 10:57:00 PM No comments:

You could tell that I was excited about my travel because I was up at 0700, way too early for a relaxed, retired person.  I fed the dogs and took them for a walk before unplugging and heading out but decided to drive for a while before having breakfast.  Breaks up the journey and makes sure the dogs get some exercise too.
One of the interesting areas that you cross on I-10 going east is the Atchafalaya Bayou.  You travel for miles on an elevated roadway that crosses the bayou with a few lakes thrown in for good measure.  It's a 2-lane road going each way and no place to pull off on the side.  Oh, there are a few exits but the first time you drive across there, you really wonder.  There is a great Visitors Center along the way.  It is huge and even has a separate parking area where RVs can spend the night if they want (boondocking of course).  It is separate from the truck parking area which is a real plus.  They even have a cup of coffee and a little museum for you as well as nice restrooms.
Baton Rouge was the next challenge.  It is probably a very nice town but every time I have gone through, the traffic was worse than in Houston.  It is probably just because I-10 runs right through the middle of it just like I-35 runs right through Austin, another traffic challenge.  Right past Baton Rouge, I took I-12 to cut off the loop where I-10 dips down to New Orleans.  Years ago we pulled another 5th wheel right through the downtown area and parked on a boulevard just past the French Quarter.  Of course, that 5th wheel was really tiny and Dave had no idea where his "navigator" was routing him.  We parked in two metered parking slots and walked two blocks back to see the sights.  Did I mention that it was Sugar Bowl weekend--but I digress (and Dave did recover eventually).
Once you get past Lake Pontchartrain and back on I-10, it didn't take long to cross Mississippi and even less time to across the small part of Alabama that comes down to the coast.  Both of these states have some really nice rest areas if you time your breaks right.
I had actually planned to spend another night on the road but I started early and, even with frequent breaks, I made very good time.  When I talked to my son along the road, he was eager to have me get there.  Did I mention that "Hilary" my trusty GPS was doing all the navigating since the fur-kids were in the back seat getting their beauty rest?  Didn't really need any navigational assistance until I was further down the road in the Florida panhandle and had to cut down from I-10 to reach Panama City.  Although I had not been to Panama City before, I had no trouble going right to the house and pulling into the yard.  I actually arrived before the kids were home from work so I just kicked back in my recliner with a soda to relax for a while since it was raining.  By the time they got home, the rain stopped and we did the rest of the set-up.
by TravelingLongdogs Posted 6/21/2010 06:02:00 PM No comments:

Well, once I realized that I was going to be taking this first trip after retirement on my own, I decided that it was still going to be a great trip.  After all, it wasn't like I hadn't driven or pulled RVs off and on for years so I knew that I could handle it on my own.   It would only take another hour or so to do the final loading of the 2009 299 RLS Jayco 5th Wheel RV.  The F250 SuperDuty Ford Diesel Truck was filled up and hooked up to the RV.  The plan was to leave Monday morning but...plans are made to change.  Dave was off at work so there was no real reason to wait for Monday morning. Taking the trip alone might have been a little misleading.  Willy, Gretchen, and Harley, my three intrepid dachshunds, had been eager and ready to head out from the moment the RV appeared in the driveway.  Like me, they love to travel!
So at about 1:30 PM today we left Schertz, TX on the initial leg of the trip around the country (or at least part of it).  My son just returned to Florida from a tour in Iraq and Afghanistan so my first layover with downtime was going to be in Panama City, Florida.  Traveling east on I-10 was no problem.  Sunday turned out to be a great day for sailing right on through Houston with minimal traffic.  I should probably mention that  Willy, Gretchen, and Harley are great travelers.  They settle down in the back seat of the truck and snooze until you are ready to stop and then they are ready to go.  We made a couple of pit stops in rest areas to take a walk and later on to fix a quick dinner.
I usually like to find a place to stop for the night when I'm ready but, for this first night,  I looked up an RV park before I left home since I had no idea what I'd find along the road.  Since I didn't head out until afternoon, it was getting dark as I pulled in the Cajun Haven RV park in Egan, Louisiana.  All was good as I made sure they had pull-through parking when I googled them.  I arrived at the park right behind an older motorhome sporting open windows and five older people who looked exhausted.  After we all checked in, the manager had us follow him around to park to our sites.
The site for the motorhome was first.  Once they pulled in, we went on down the road to my site.  The helpful manager hopped down from his vehicle and wanted to know if he should hook me up especially the sewer.  I said thanks but I could handle it and sent him on back to the motorhome as they looked beat.  I planned to hook up the electric only and leave the truck hooked up since I would be leaving first thing in the morning.   Once the A/C was running in the RV and I did a bit of quick leveling outside, the fur-kids and I set out for a walk around the park.  The motorhome folks stopped us for a quick chat.  It seems that the two couples flew out to California to pick up the motorhome that was owned by one of the ladies whose husband had passed away several months before.  They had no RV experience and the lady who owned it had no idea how it worked.  Guess hubby did it all--what a mistake!  Their dash A/C apparently died earlier in the day so they were hot and exhausted and very happy I sent the manager back to help them.  I asked them if they had a generator onboard and suggested that they could run the motorhome A/C while they drove the next day.  We left them looking for the manual on how to use the generator and continued our walk.  The dogs wanted to explore but with little to no lighting in the park, mosquitoes big enough to carry a dachshund away, and the thought that this area could possibly have snakes and even alligators lurking around the edges, I vetoed that idea and we headed back to the RV for a shower and a snack before bed.
by TravelingLongdogs Posted 6/20/2010 10:00:00 PM No comments: