I picked up my RV from storage on Wednesday so I could pack up for a small rally with the Texas Ramblin' Roses. Everything worked perfectly as I backed out from under the storage building roof but a few miles down the road, the screen with , the radio, the GPS, the backup camera, etc., just quit working. Of course, now no screen view of anything. Once I got home, my husband and son checked every fuse both under the dash and under the hood. Everything was good. At least, although inconvenient, it won't affect my trip to the rally as I know where I am going, can do without the radio, and can backup using the mirrors.

I don't like to start my fridge when the RV is in the driveway as it is not level enough. So about 9:30PM, I went out to pull it forward into the cul-de-sac. Everyone else angle parks so I am not in anyone's way. All of a sudden, I realized the radio was working.  Of course, I am thrilled; however, hubby and son both immediately commented that wasn't really good as it meant something was loose.

Next morning I headed out to Skyline Ranch RV Park in Bandera TX. Guess what, the radio, GPS, etc., all worked all the way there. 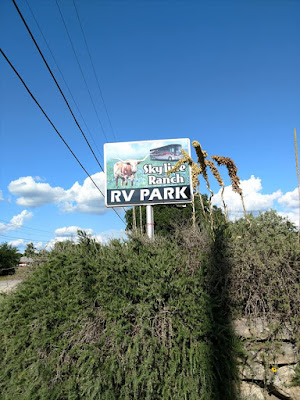 This was different from our regular rallies.....it is the first one since Covid19 reared it's ugly head. We cancelled rallies in April and June. Anyway, everyone was told well in advance that we would be social distancing, using masks where we couldn't social distance, and using lots of handwashing and sanitizer. We had a rally room but chose to sit outside most of the time with a good breeze and 6 foot spacing. 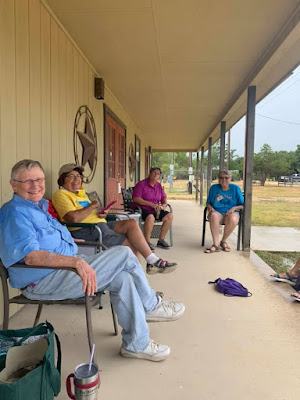 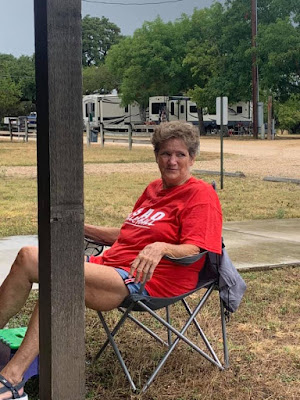 It worked out well since we only had 15 people at the most. 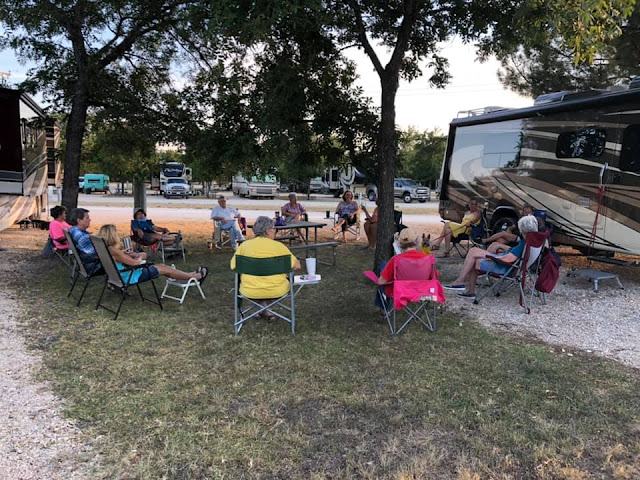 A couple of the women made a trip to the Apple Store in Medina and brought back some goodies. This is Lollipop, a long-haired dachsund that travels with Marla. She was definitely waiting for her share of the apple strudel. 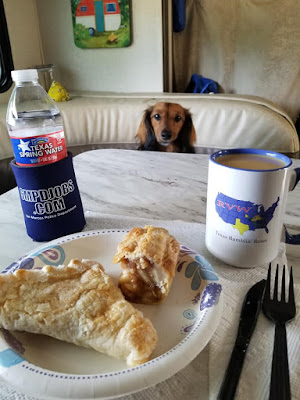 We always take a group photo. Everyone will remember this one taken with distancing and masks. 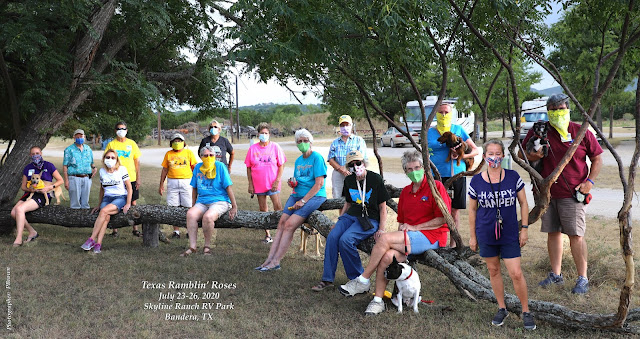 We did eat out a couple of times at the Brick's River Café. They have a patio and some huge fans to create some really strong breezes. They also have some pretty good food. Several people had their Dr Pepper burger both times along with some great onion rings. The chicken fried steak was great too. We may also have sampled their peach and blackberry cobbler the second time we ate there.

The morning we left, several of us went to the Cracked Mug Coffee House for breakfast. They have great coffee and some good food choices for breakfast or lunch. When I arrived back at the park, my son was sitting in the shade waiting for me. He rode his motorcycle up.....it's a nice ride through the Hill Country. Packing up took no time with his help outside.

All in all, it was a fun time with friends planned with safety in mind. Unpacking back at home was quick and easy too as I didn't have to take a lot for the weekend. Emptied the fridge and freezer and brought in the clothes....clean and dirty. Then it was back to the storage lot until the next outing.
by TravelingLongdogs Posted 7/28/2020 09:35:00 PM 3 comments:

Wrapping Up the National Park Trip

Well, let me try this again. The last try at this post would not save and publish so I lost it.

We left our lovely forest campsite late on Wednesday morning. My first thought since we actually had an extra day left was to head down to Williams to the Passport America park so the kids could swim and see the railroad museum. A quick call confirmed the news that the pool was closed so that ended that. Next thought was a stop at the Petrified Forest, Winslow, etc.; however, once on the road, everyone seemed to be in travel mode. I called Enchanted Trails in the afternoon to get a reservation and had to leave a message. Apparently their office hours really vary with the virus situation and my timing was probably off too. New Mexico, Arizona, and Utah are on mountain time but Arizona does not do daylight savings time so it felt like we were constantly changing time zones since we were back and forth between them. It was after dinner when we arrived so I checked the office door to see if they left a site number. No site number for us so I just made sure we didn't take one that was assigned to someone else coming in and we got set up. The next morning I stopped at the office and paid for the night.

Our next stop for the night was Big Springs TX. We went back through the less than scenic part of New Mexico and on through Roswell. It looked a bit dark off to the side later in the afternoon but it could have been smoke or dust. Steve and the grandkids got ahead of Helen and I so they were already checked into the hotel when we arrived. it was much too hot for them to stay in the truck. The parking lot was too small for me to park so I pulled up on a little road next to it. Further back it said no parking but there was a semi in front of me and Steve said the driver just checked into the hotel. I was going to fix dinner for us and then look for another place but we were suddenly hit by a strong storm with lots of thunder, lightning, and wind. I called and asked if the kids could just eat at the hotel. Unfortunately, the hotel did not have a restaurant but they quickly ordered a pizza delivery. I fixed Harley and me some dinner. Fortunately storms do not bother Harley at all. I took him out during a slight break in the storm and then we settled in for the night. I figured I would move if I got a knock on the door but otherwise I was not moving in the storm.

The following morning we headed out on the final leg of the trip home. I stopped at Steve and Helen's so they could take their things out of the RV and then headed home. All I brought in was the dog food and the food in the fridge and freezer.

I thought I might have to sleep downstairs on the couch Friday night because I was so stiff but I made it upstairs.  Saturday morning I could barely move. Driving my RV is very easy and not tiring. The driver's seat is very adjustable. Sitting in one stop for way too long is what does me in. Steve, Helen, and the kids showed up and cleaned the RV outside and inside. I was really grateful as it was pretty dusty and dirty and it looked great when they were done.

Thoughts about the trip.....

I'm very glad I went. It might be the last long trip with the 16 year old. Both Grandkids were impressed with the parks but Cameron especially enjoyed it. He loved the hiking they did as well as the scenery. He can pretty much keep up with Steve and Helen.

Really glad I am very used to having Plan B and even Plan C as we needed both when the Magnum Fire closed Jacob Lake and the North Rim and even closed Hwy 89a so we had to reroute back around Hwy 89,

I really enjoyed the boondocking, dry camping, wild camping (whatever you choose to call it) that we did. We managed just fine. I have both a generator and 150w of solar. My 5th wheel had huge fresh water, gray, and black tanks. Since I usually travel alone with Harley, I will have to figure out exactly how long my smaller tanks on the Phoenix Cruiser will last. I only used the generator a couple of times. I have an old fashioned aluminum coffee maker that I can use on the stove versus the antique electric percolator I normally use. Hey, it is over 40 years old but works fine, lol. It was cool enough that we didn't need any heat. The fantastic fans with a couple of windows open kept the temperatures very comfortable for Harley and Angus when they stayed in the RV while we toured the parks.

Dave built a shelf in the bottom of one of my shirt closets before I left. Before that I had to keep my pots, pans, slow cooker etc., in the cabinet over one of the beds and it required unloading a lot to get them out. I knew that would not work when we would be cooking for 5 on a regular basis. The new shelf worked out really well and I still had the plastic drawers above it.  Good move!

I also put 4 large hooks in the shower so we had a good place to hang towels to dry. There were no wet clothes or jackets but they will work well for that too.

I had a 4x6 woven plastic Buc-cees rug that worked well outside the door to help keep the dirt down inside the RV. It is small enough to fit in an outside storage area so that worked well too.

Of course, I also did some rearranging so that I could fit more things in from the kids. I love the large pantry and the fridge and freezer are a decent size. I left some pillows from the couch at home so that three could sit on the couch recliner. We also used the two folding camp chairs inside so we could all sit in the living area. Morgan and Angus like to sprawl wherever they sit so we had to change those habits but we all fit in when we needed to fit.

I did learn one interesting and embarrassing thing the morning I left on the trip. The RV would not start, actually the key would not turn. I tried both of the keys......no go. Finally called in hubby. Didn't work for him either. Last try and it turned and started right up. Apparently the steering wheel was locked and DH didn't clue me in on that until today. Yes, he is in trouble. 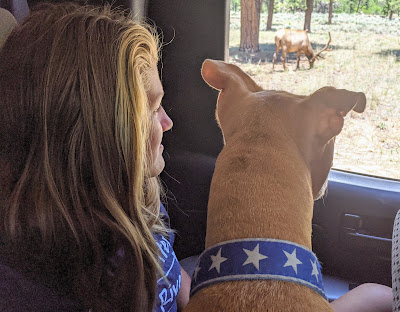 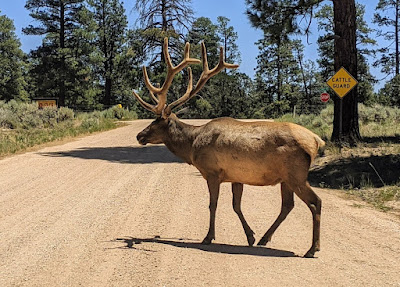