After an unusual number of cloudy gray, cold days, I was more than ready to get out in the sunshine. Since an RVing trip wasn't in sight, I decided to head out for a scenic drive. The Traveling Longdogs were eager to go too so we packed up and headed out. First stop, New Braunfels.....I wanted to fill up with gasoline. Gasoline was $1.75 and......diesel was $2.19!!!!

I decided to head out to the far end of River Road which is in Sattler near Canyon Lake so that I would be heading back towards home on the trip. This proved to be a brilliant move as traffic going my way was almost non-existent which is wonderful when you want to cruise along slowly and grab a few pics while enjoying the view. Since it was a weekday, traffic from the opposite end was also light but not as good as from the lake end.

River Road criss-crosses the Guadalupe River about 7 times. There are no big high bridges just crossings just above the river. We've had a fair amount of rain so the river has a nice amount of water in it. 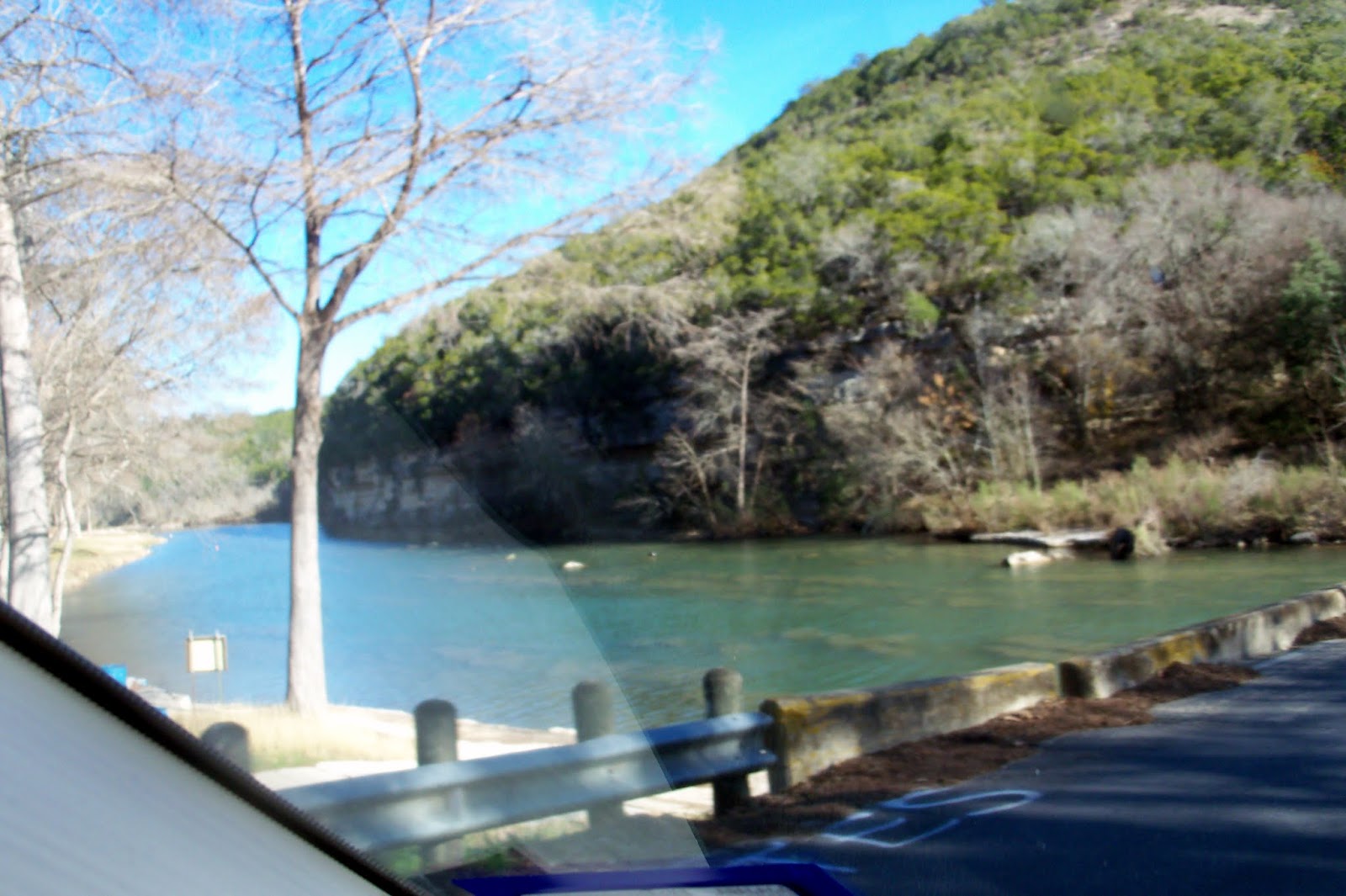 Many of the trees are bare but the grass is green and the air is nice and warm. 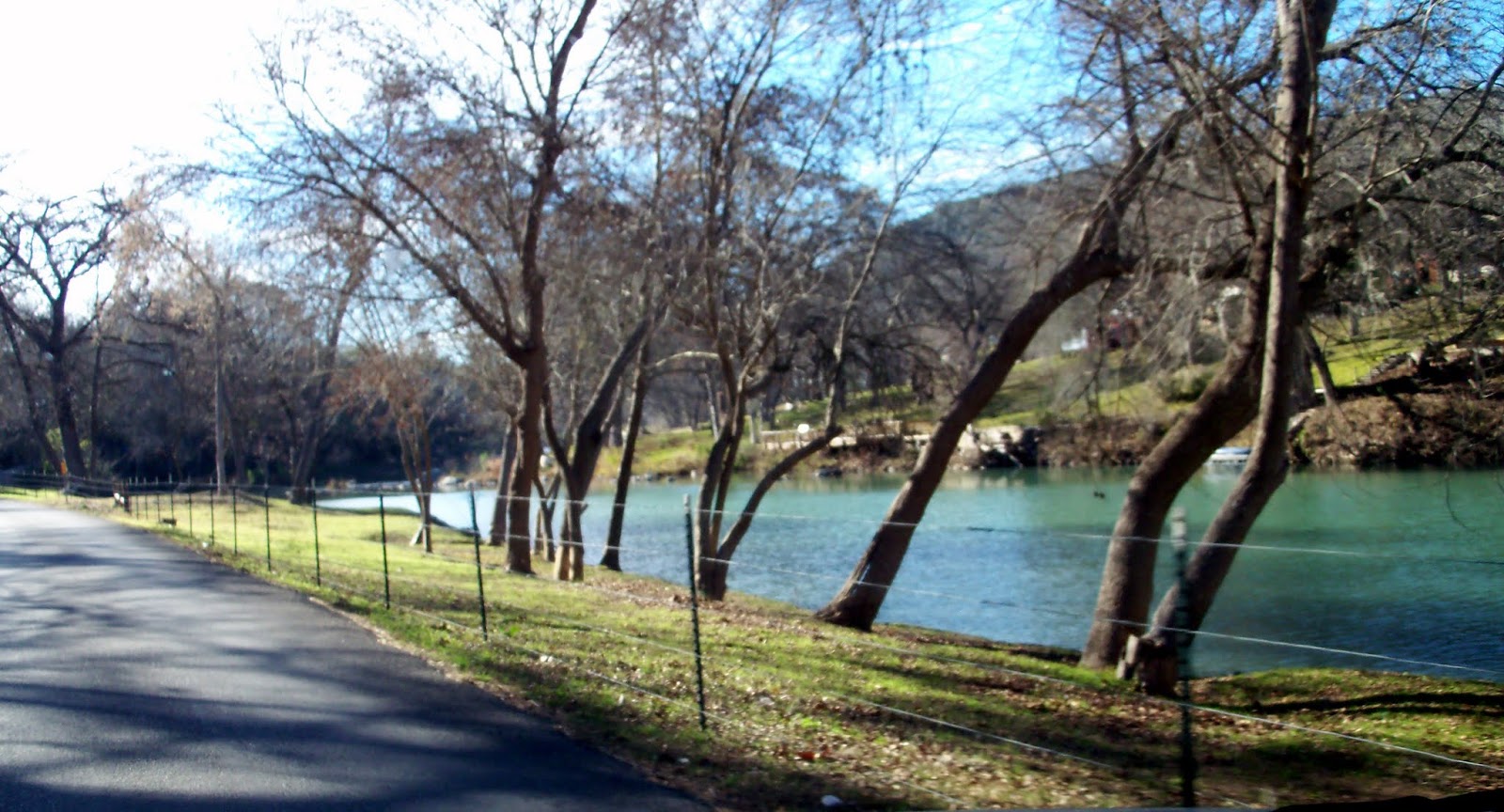 It's a tranquil, soul refreshing drive. On a hot weekend day in the summer, it would be crowded and noisy with people toobing in the cool water. Yes, it is "toobing" on the Guadelupe not "tubing". You will have to "tube" elswhere. 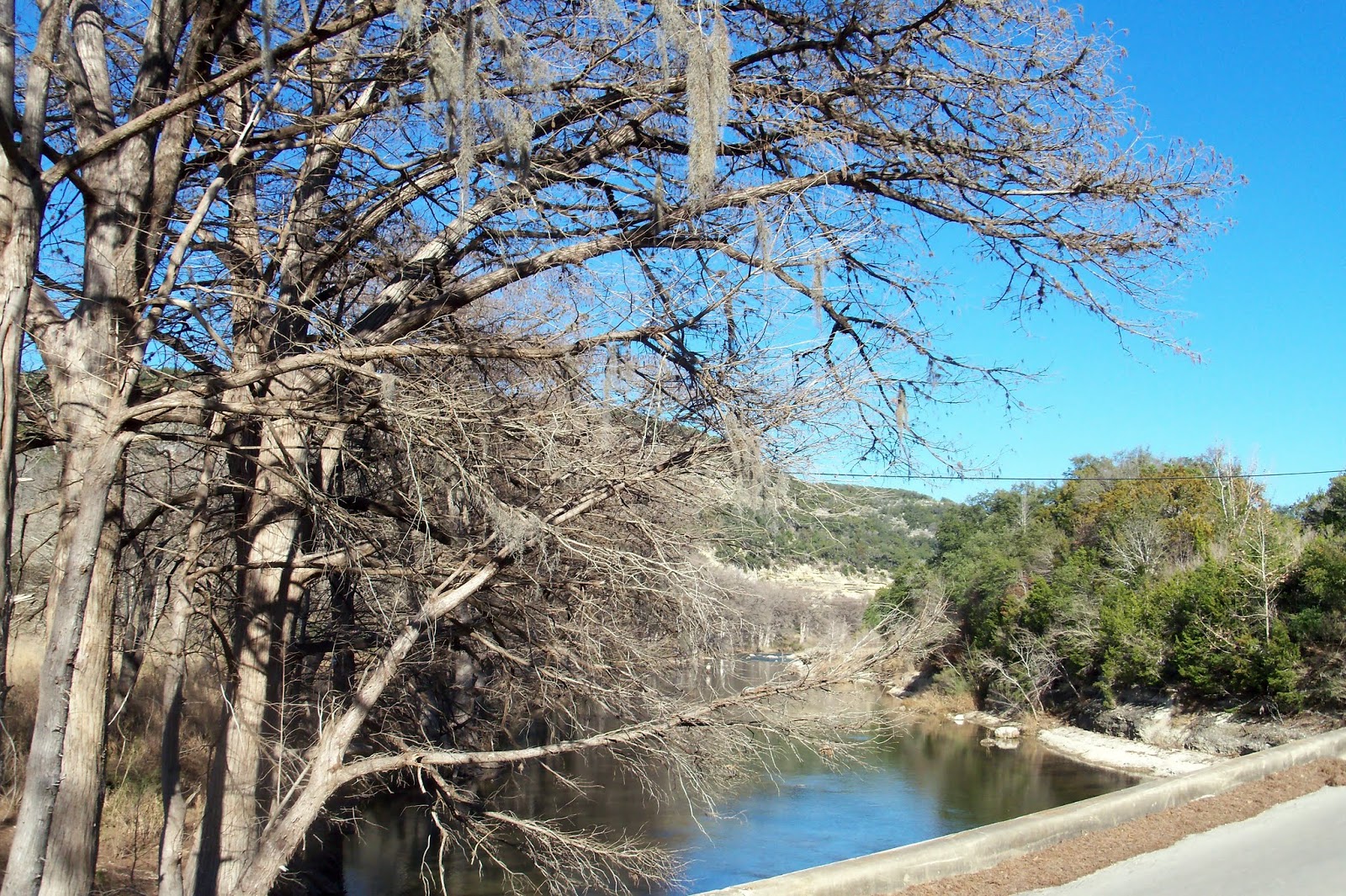 Today I saw relatively uncrowded campgrounds along the way. There were fly fishermen spread out along the way just enjoying the beautiful day. 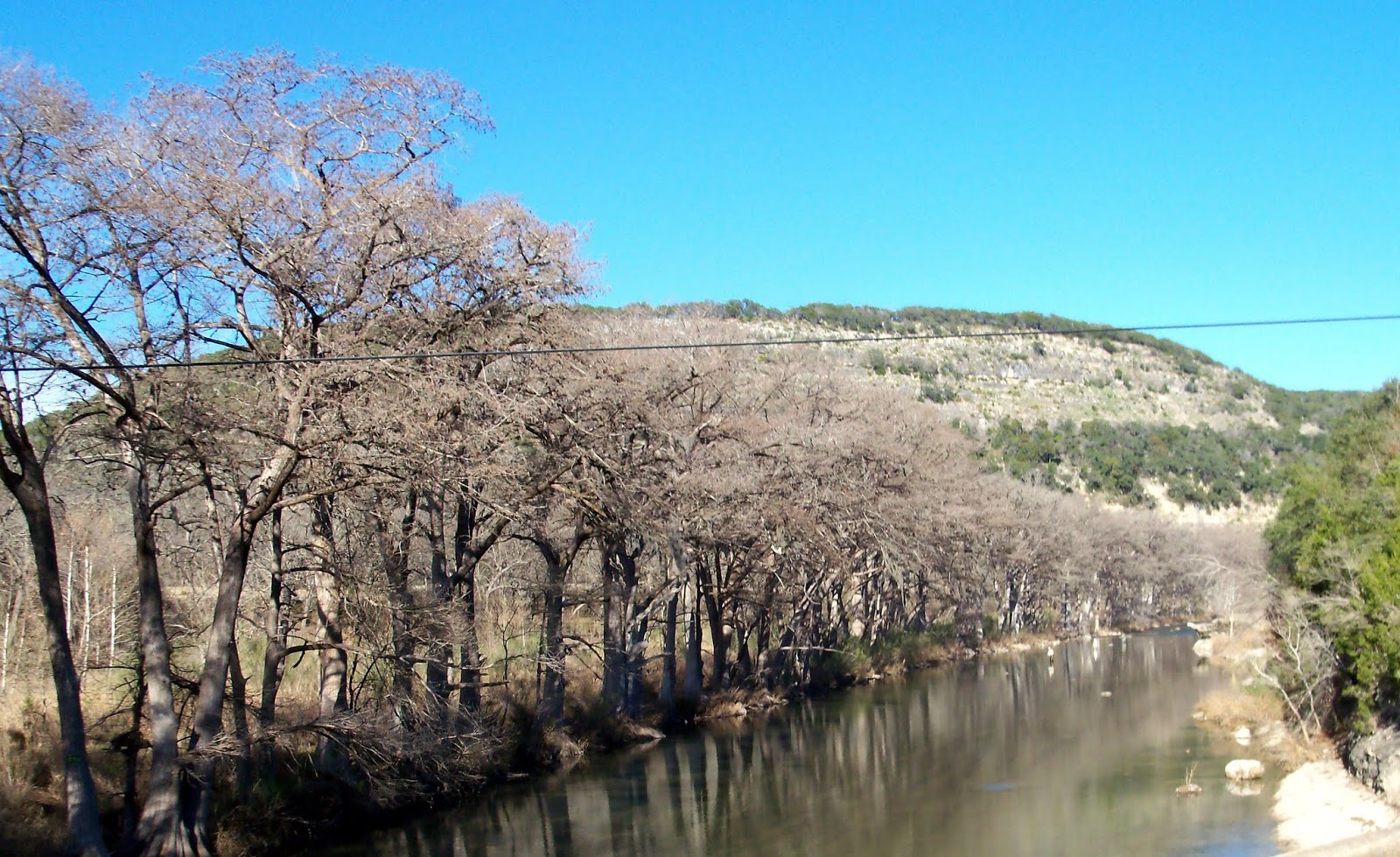 There are a couple way in the background of this picture. 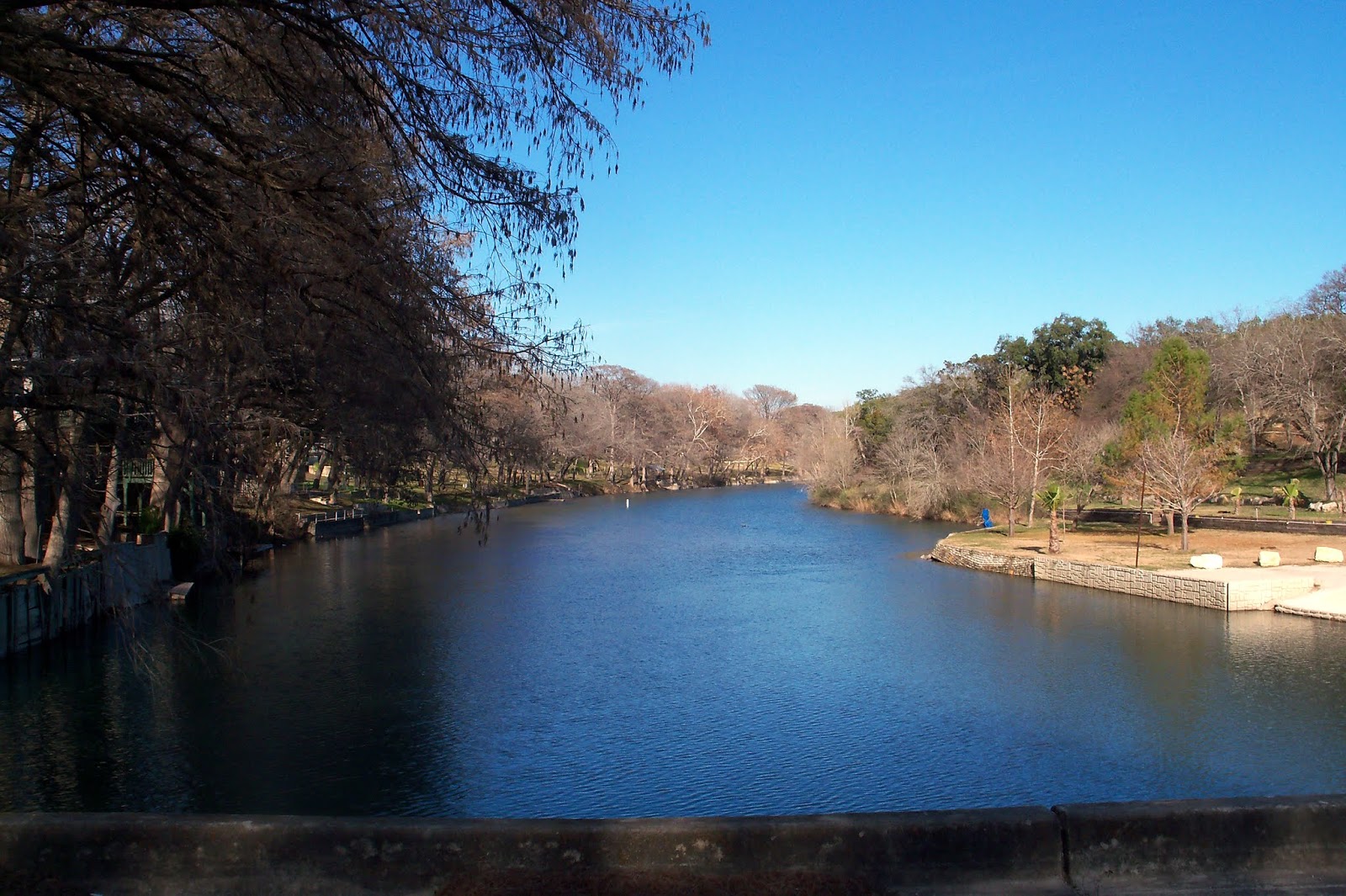 Summer would see lots of tents along the shore. 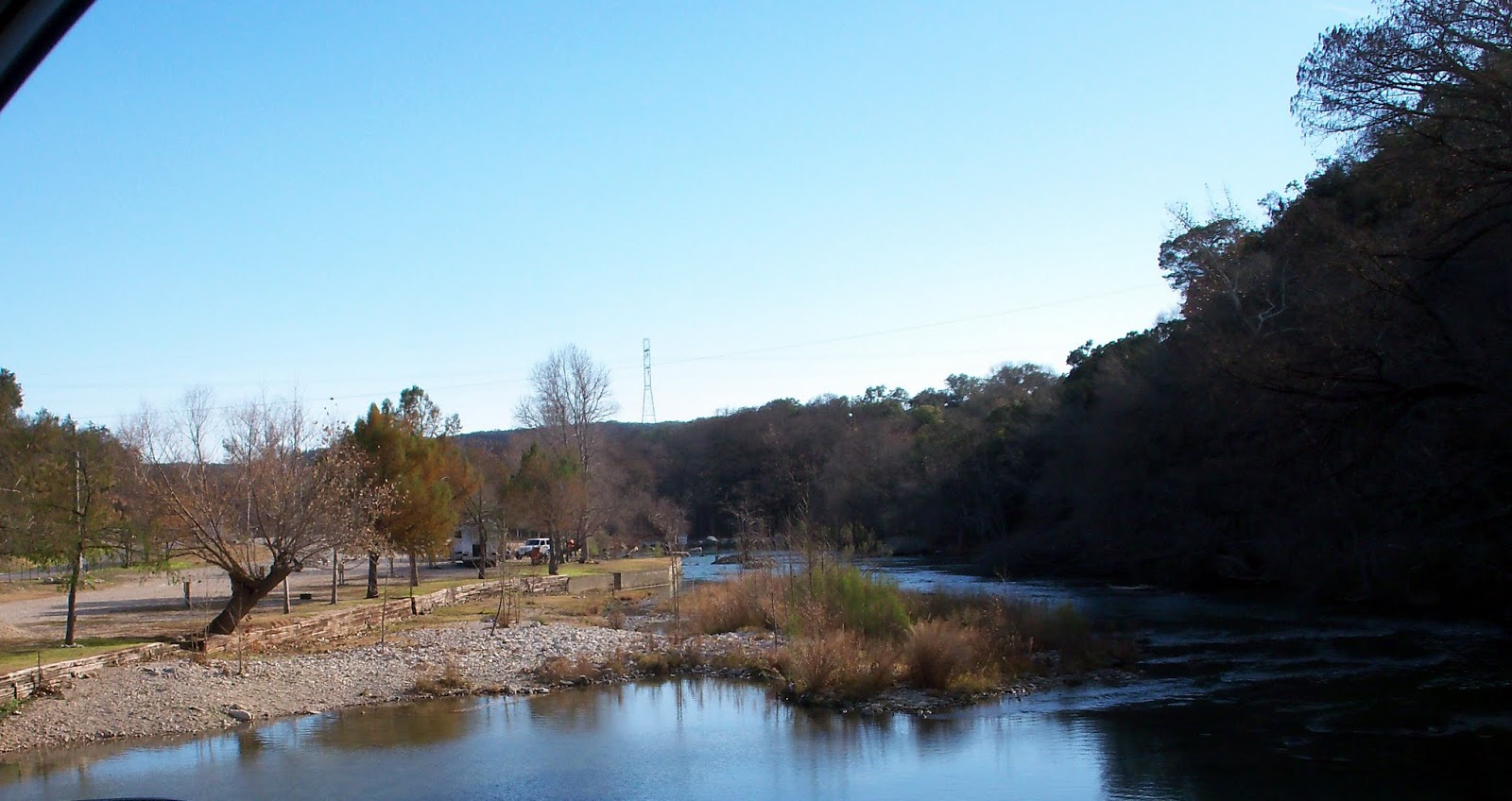 But today it was peaceful and calm. I felt so much better. We all really enjoyed our outing. 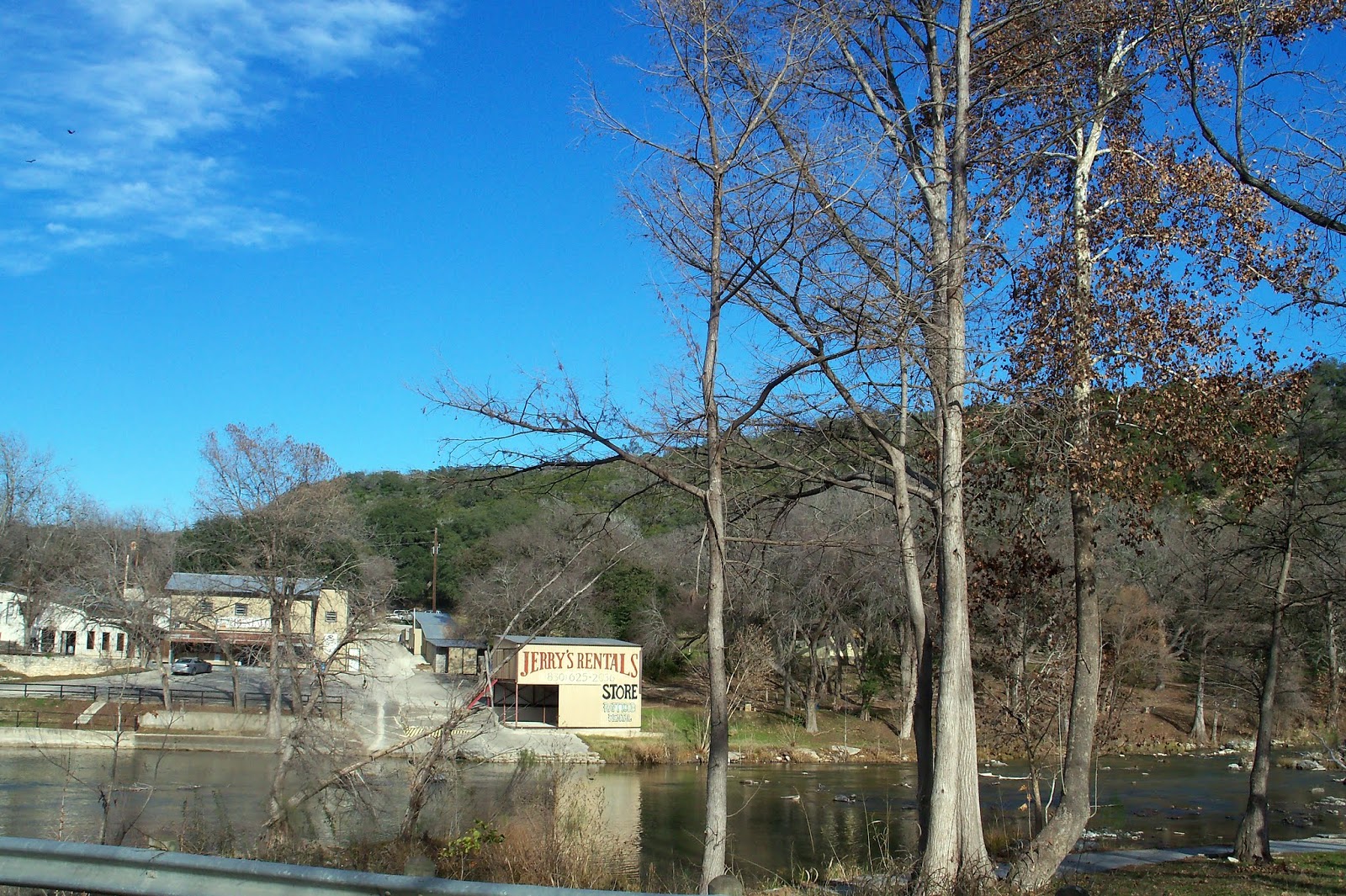 Of course, an RV trip would be even more exhilarating but you sometimes you just have to make the best of the situation.
by TravelingLongdogs Posted 1/26/2015 12:29:00 PM 2 comments:

Drifting Along with Birthdays to Break the Monotony

It seems like the days have just been drifting by. Central Texas has had more than it's share of dull, dreary, chilly days.....not the norm for us. Those dull days seem to affect me. I want to be gone somewhere sunny in the RV.

The first break in the monotony came back when friends stopped over for coffee a couple of weeks ago and then on the 12th my friend Loretta had a birthday. Her husband loves to cook and he had a dinner party for her. I think he made his best batch of Melanzana (Eggplant Parmesana) ever. It is one of my favorites. He also made a delicious batch of chicken and pasta in a creamy cheese sauce.  It was a really nice evening. AND, they sent me home with a wonderful package of Melanzana.

Then this weekend, we celebrated two more birthdays. Granddaughter Morgan and son Steve actually have birthdays this coming week but the grandkids were here for the weekend so we just celebrate as close to the dates as we can.

This is a "half and half" cake. One side is strawberry for Morgan and one side is vanilla for Steve. 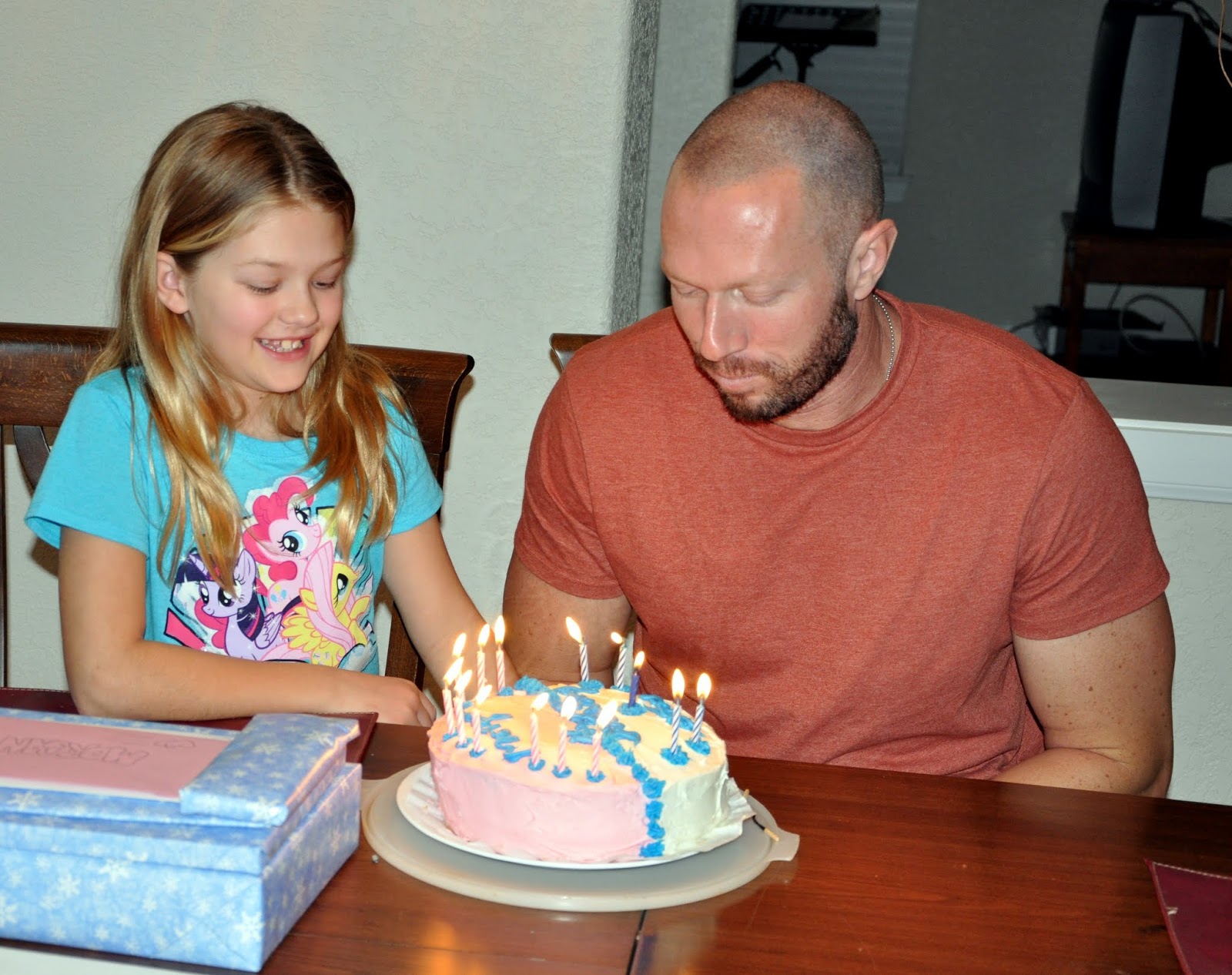 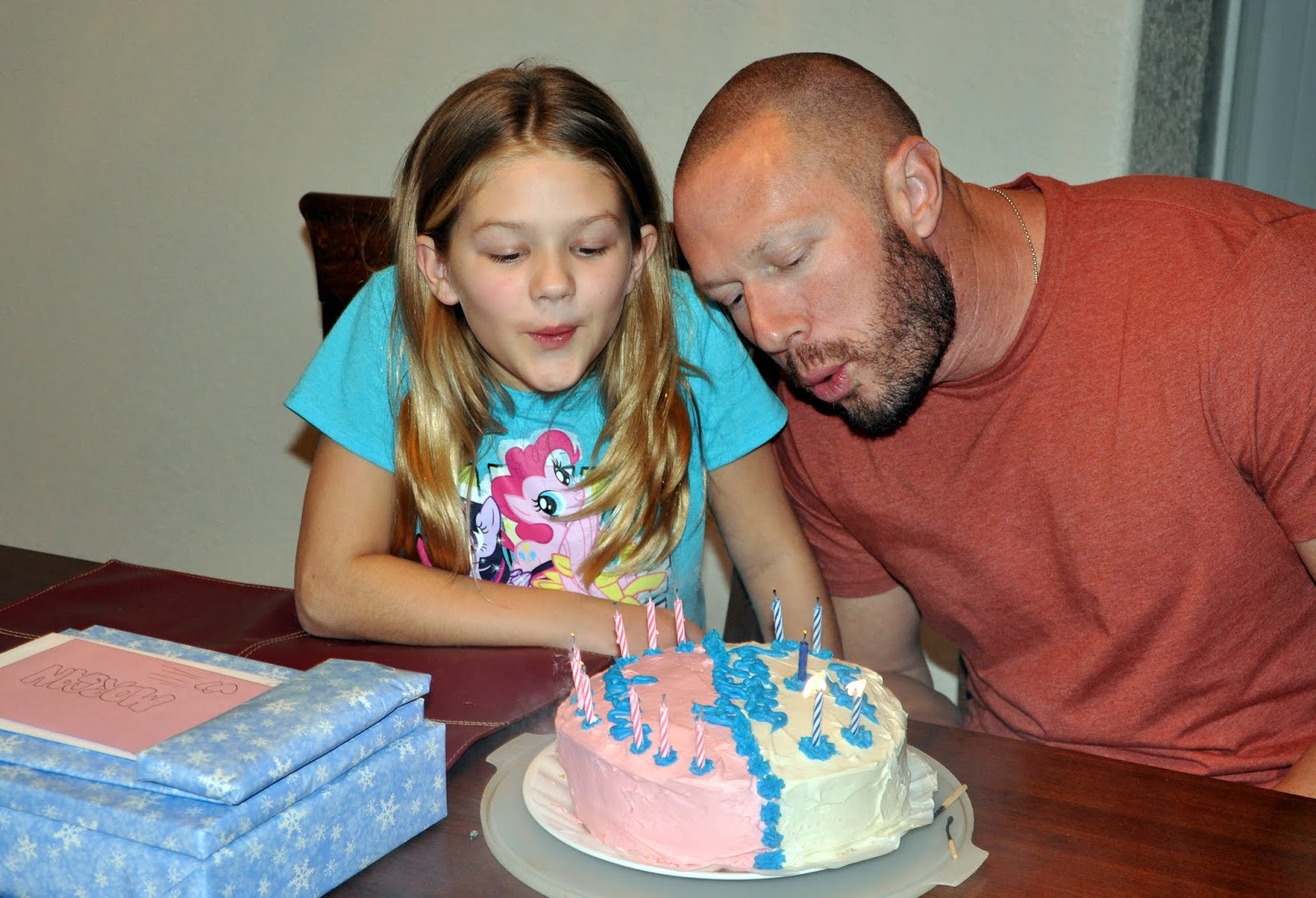 I think they both enjoyed their cake and presents. 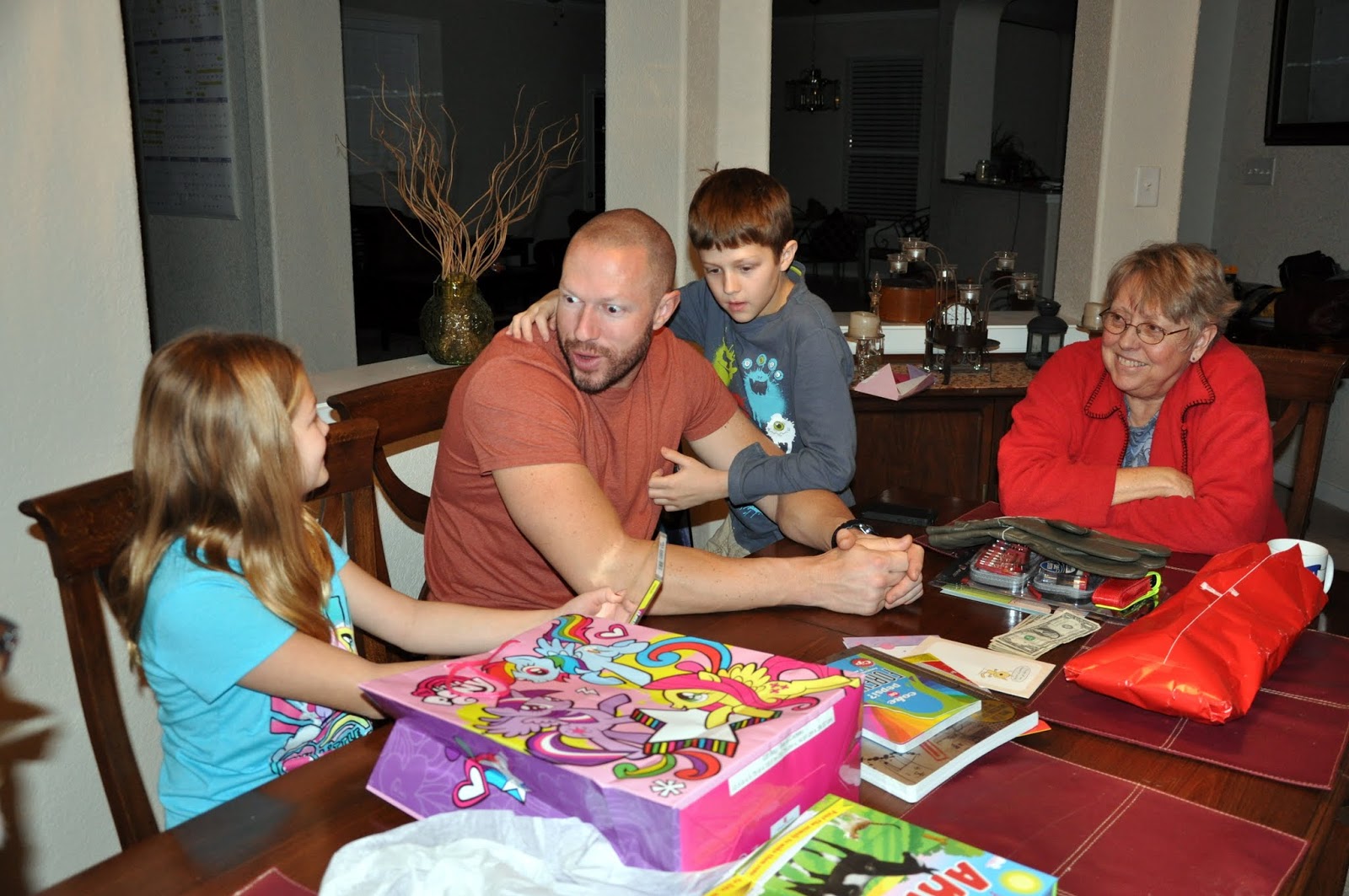 We finally got some sun and rising temperatures.

Did I mention that we have a recent graduate in the family?

One short year ago, Angus was adopted by my son and daughter-in-law through Love-a-Bull's Rescue in Austin, TX. This photo of Angus was used for one of their later adoption shows held in Austin. They are dedicated to finding the right homes for Pit Bull type dogs and families must pass rigorous scrutiny before they can adopt. Love-a-Bull's also strongly promotes and supports training for dogs and owners. 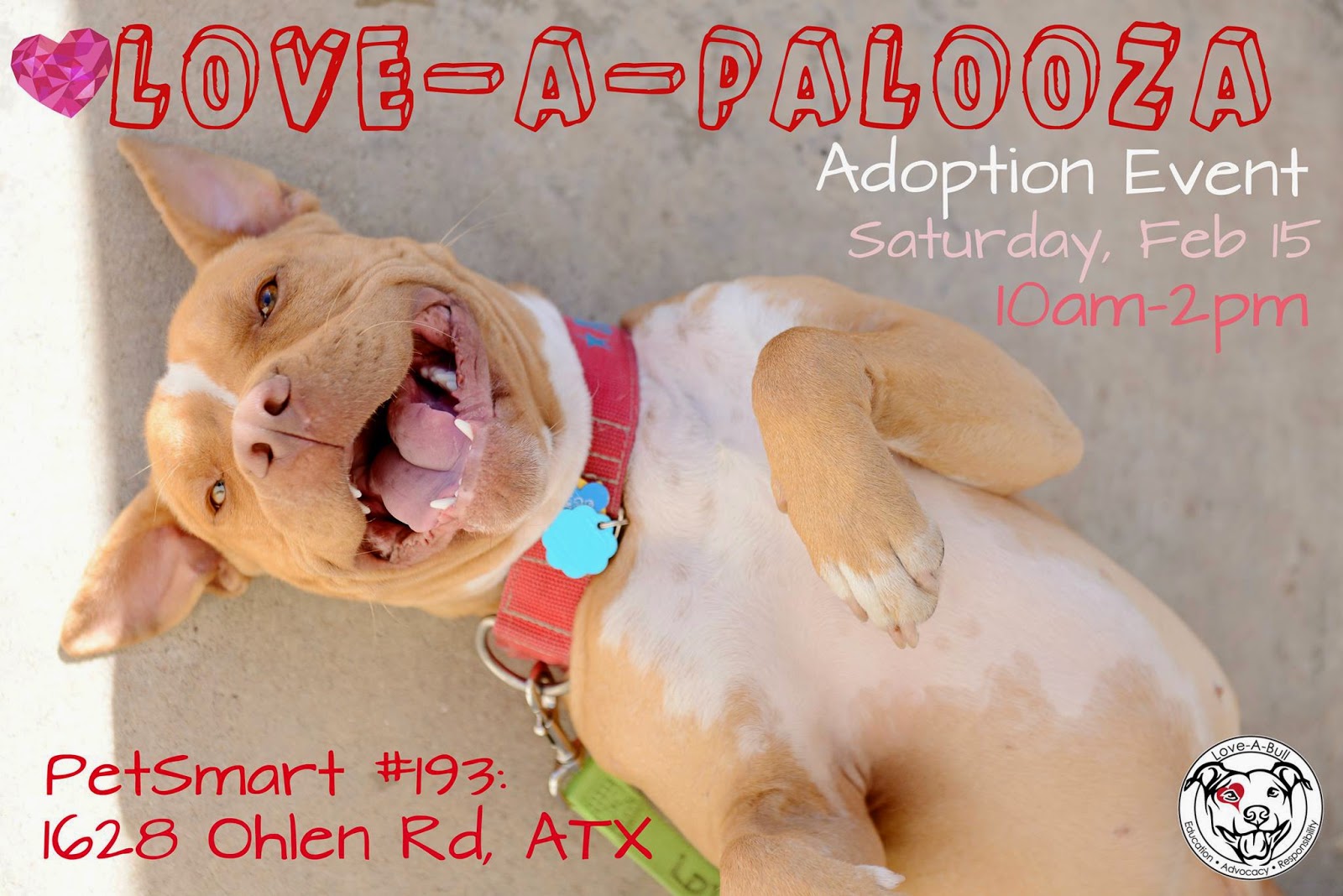 Since then, Angus completed Advanced training. He went to basic training but they took one look and moved him into the advanced class his first night. His foster family had started teaching the basics and Steve worked with him too.

Next he attended more school and earned his Canine Good Citizen Certification.....not an easy honor to earn!

Love-a-Bulls urged Steve to take him to even more advanced training......so last weekend, Angus completed his training and passed the rigorous testing to become a certified Therapy Dog. Steve and Angus have made lots of trips up to Austin so that he could have a well rounded education. 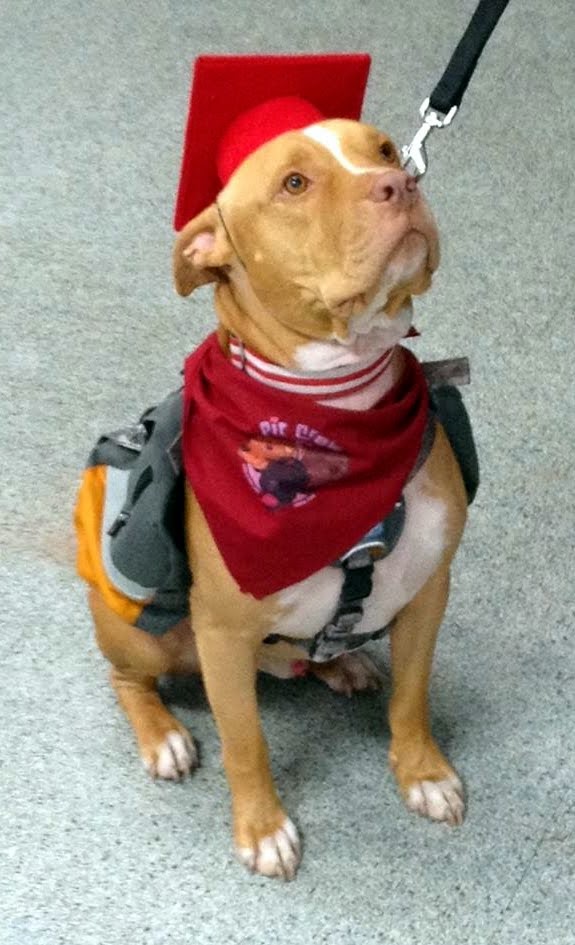 He is now a member of the Love-A-Bull's Pit Crew, a very well known, all pitty type dog therapy group based in Austin. Angus is actually an American Staffordshire Terrior mix. There are about 5 or 6 different breeds that the media and general public tends to lump into the "pit bull" category.

Angus loves people, kids included, as well as other dogs. He is good buddies with The Traveling Longdogs and loves to go RVing with them. Maybe you'll get a chance to meet him....he loves making new friends.
by TravelingLongdogs Posted 1/13/2015 05:04:00 PM 2 comments: