Merry Christmas to All and to All a Goodnight

In my last post, we didn't think Helen was going to make it back for Christmas. Her mom did well in the surgery but Helen was concerned about being there when she had to meet with the oncologist the day after Christmas. At the last minute she was able to work it out so that she would be included in a conference call during the doctor visit. With her medical background, that was important so that her Mom asked all the right questions and got all the info to make the right decisions about any other treatment. She got the last available seat before Christmas Tuesday night arriving at 12:30AM Wednesday morning. We didn't tell the kids so I went over to their house after the kids went to bed to help Steve finish wrapping the Christmas packages. Then I stayed while Steve went to the airport to pick Helen up. It was a short night on sleep for all of us. The next morning, Helen was busy making spiced nuts when I came over to help bake cookies. 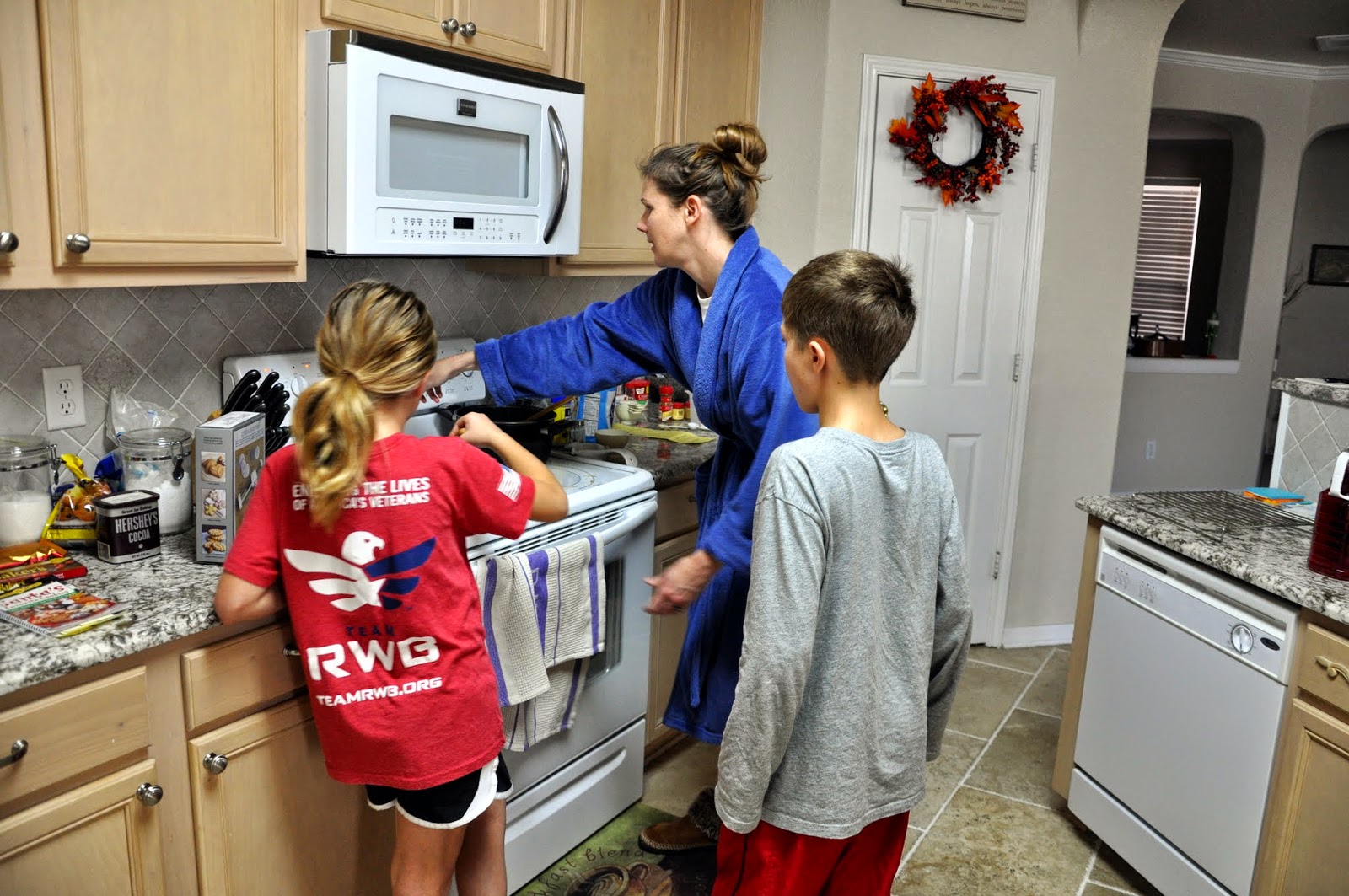 I bought all the ingredients ahead of time as she really wanted to do this even though it was already Christmas Eve. She has a lot of patience with the kids. 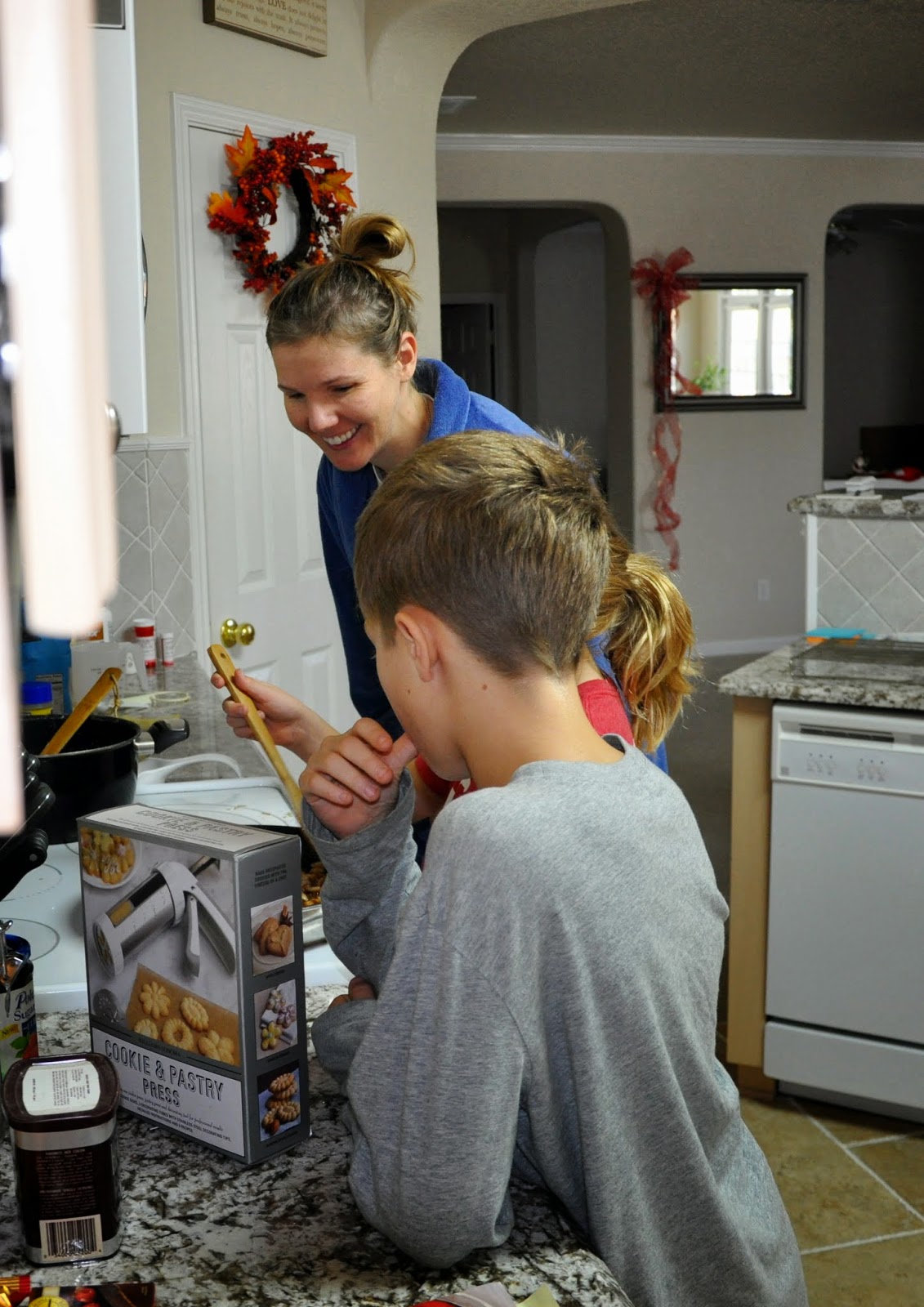 Morgan loves to cook with her and Helen has taught her a lot already. 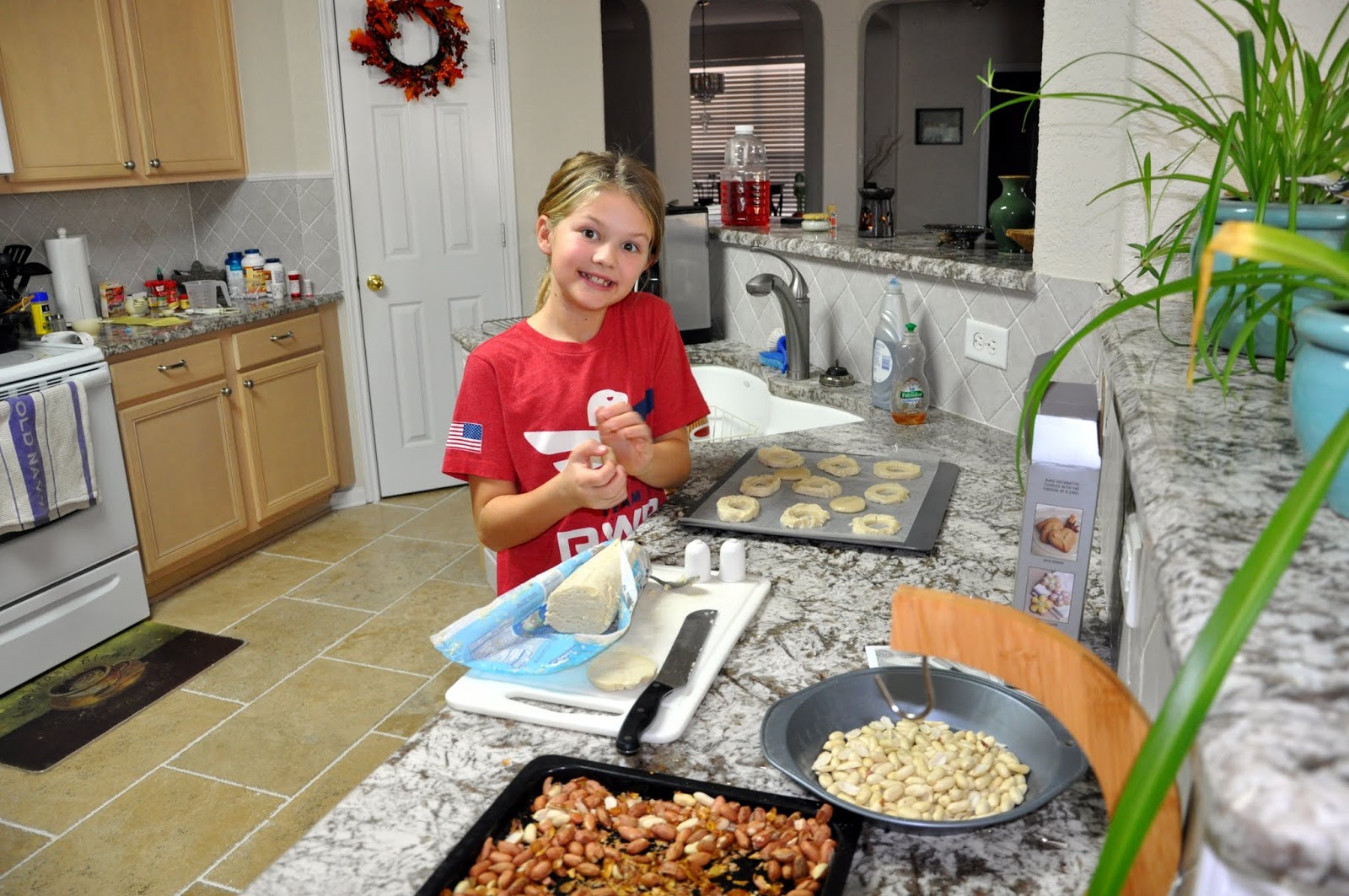 I got Cameron into the act by having him unwrap all the hershey kisses and make all the balls for the peanut butter kiss cookies. 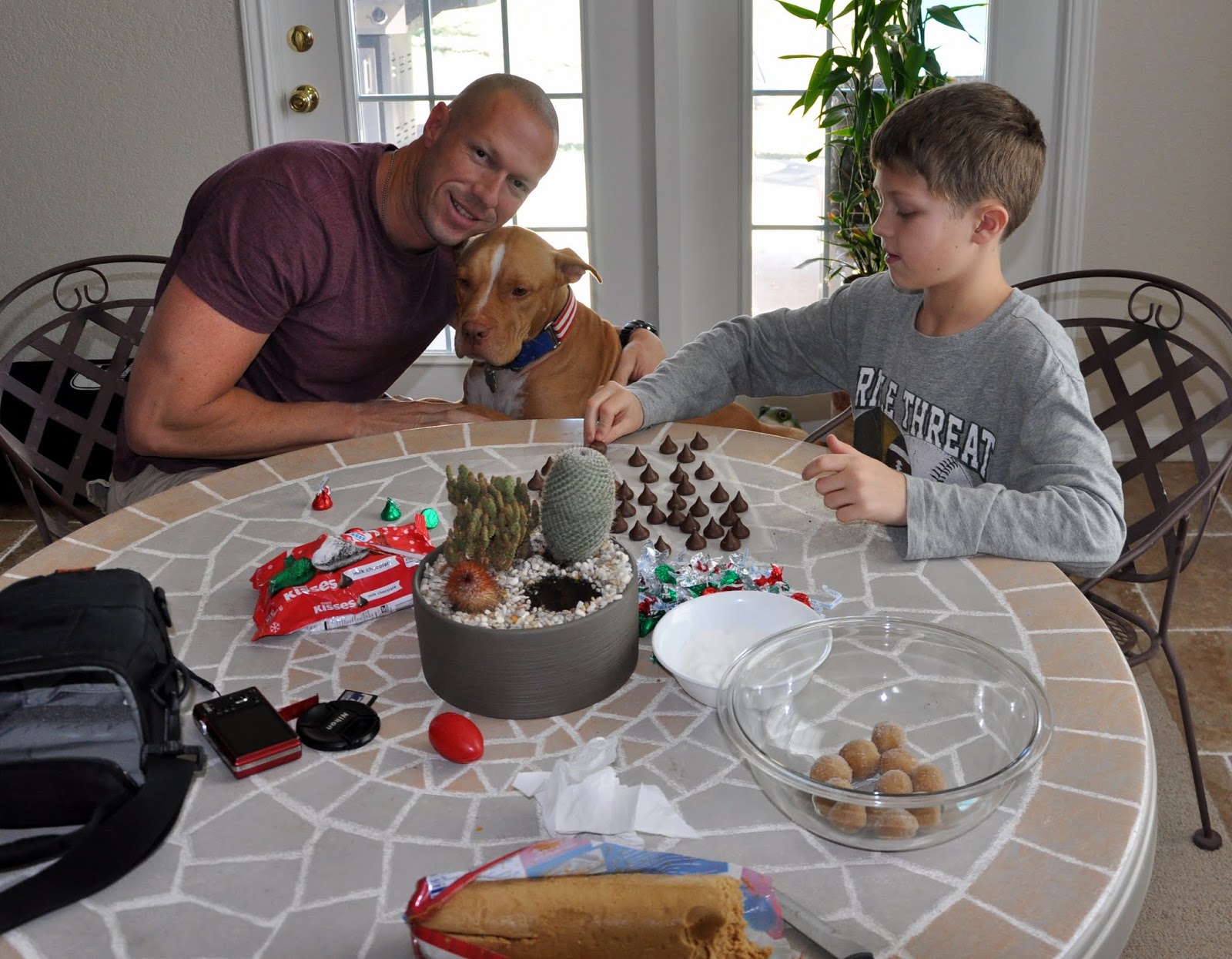 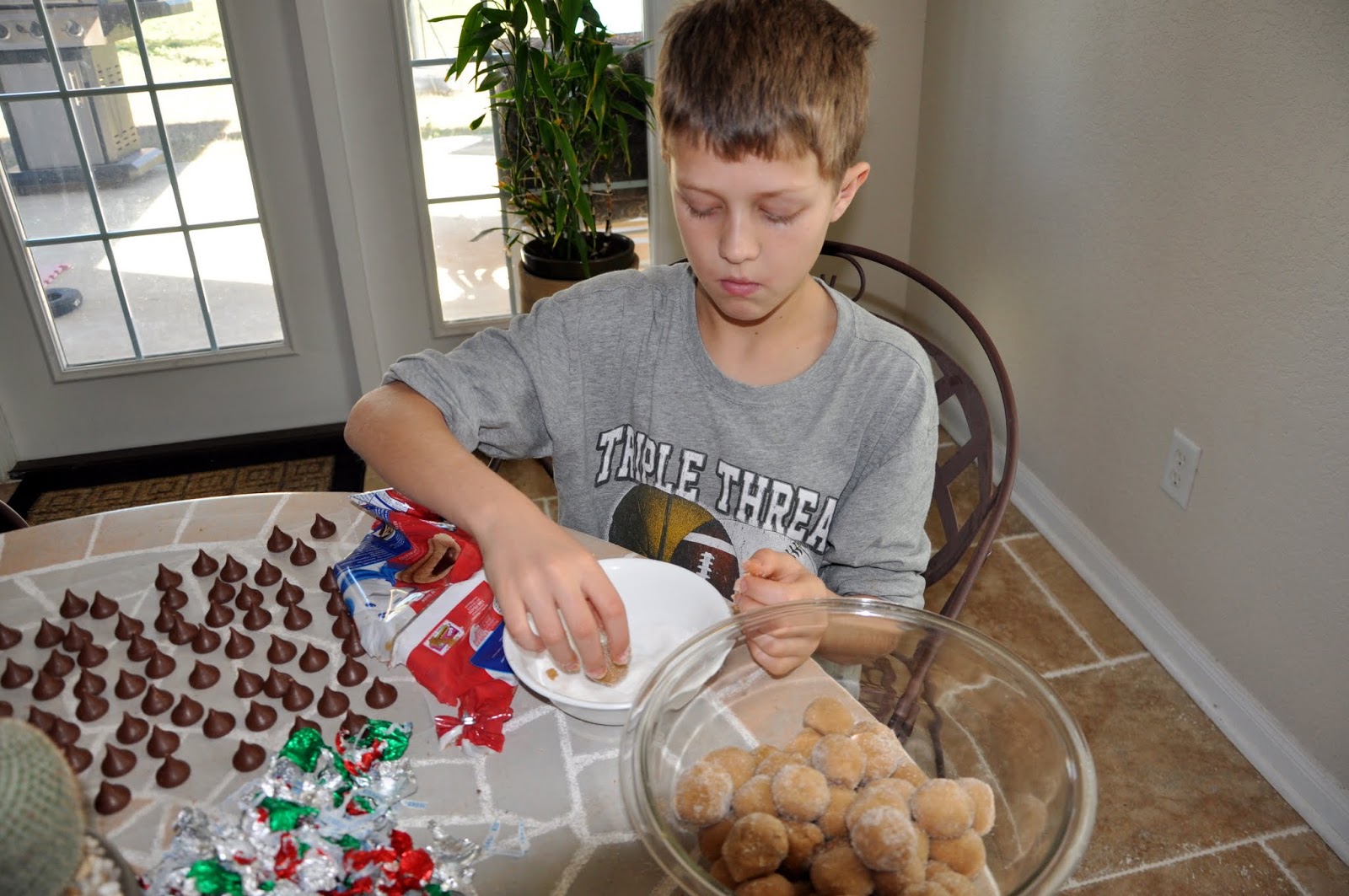 He did a great job too! 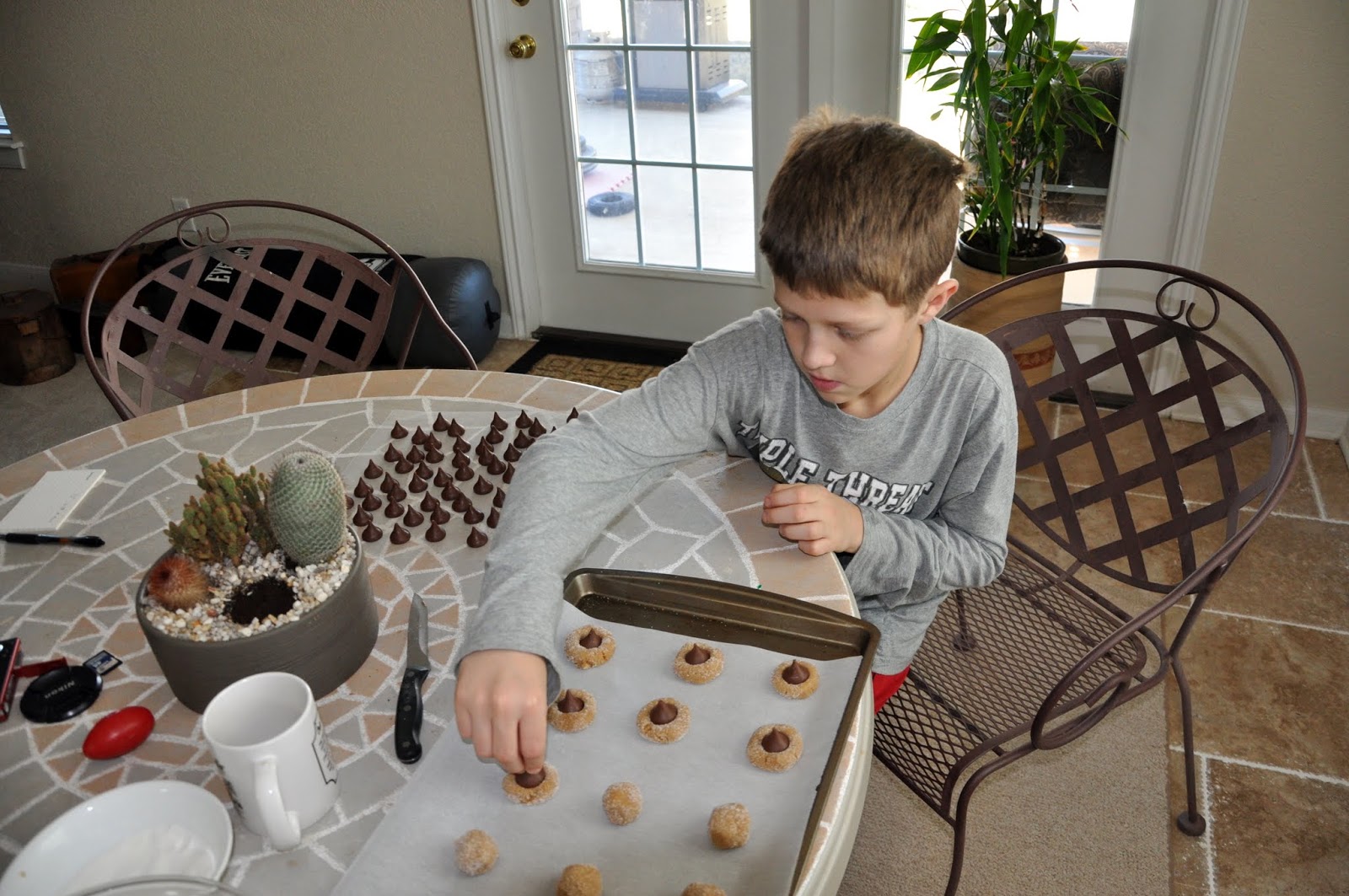 Helen and Morgan were busy mixing up several other kinds of cookies. 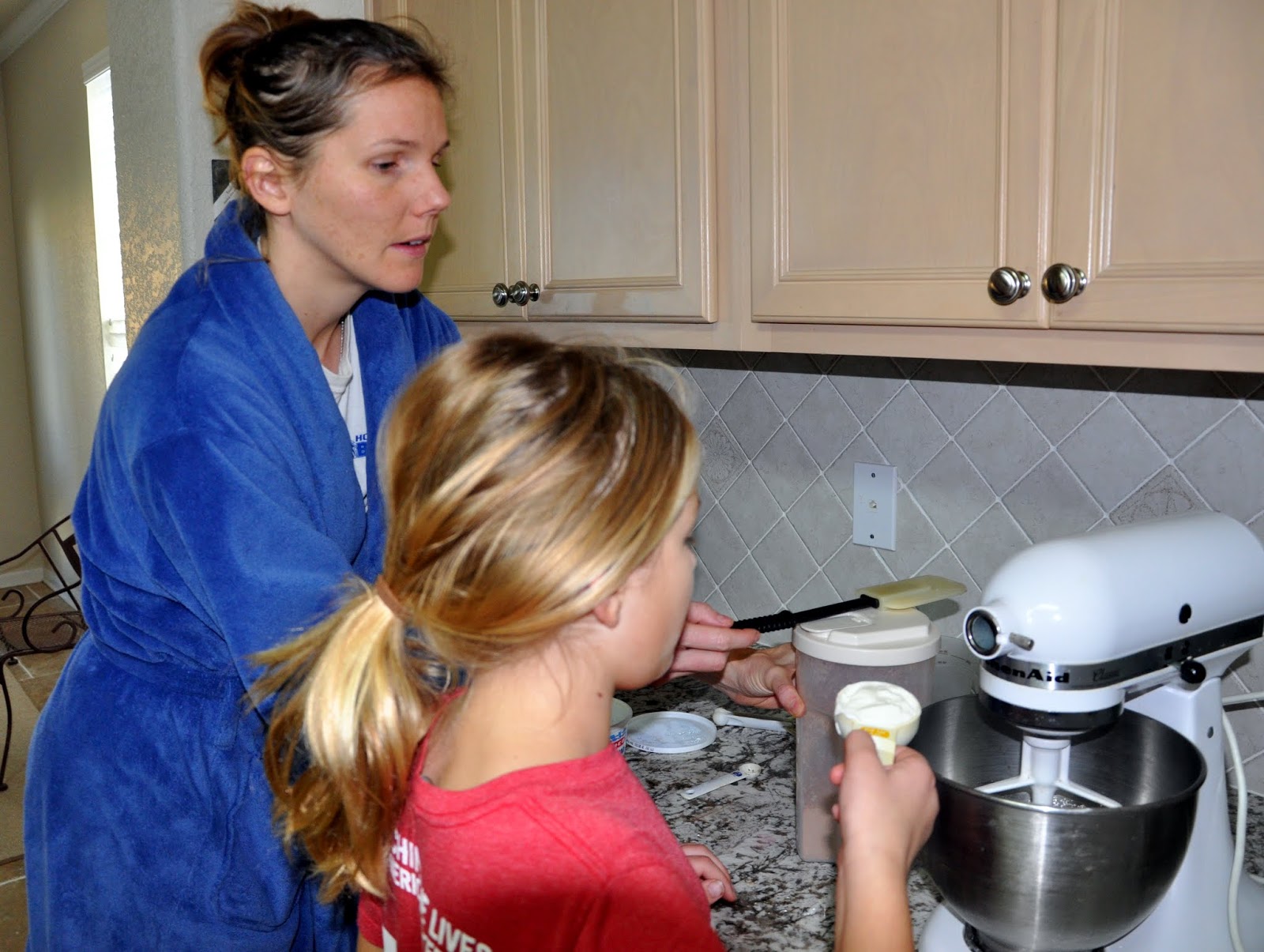 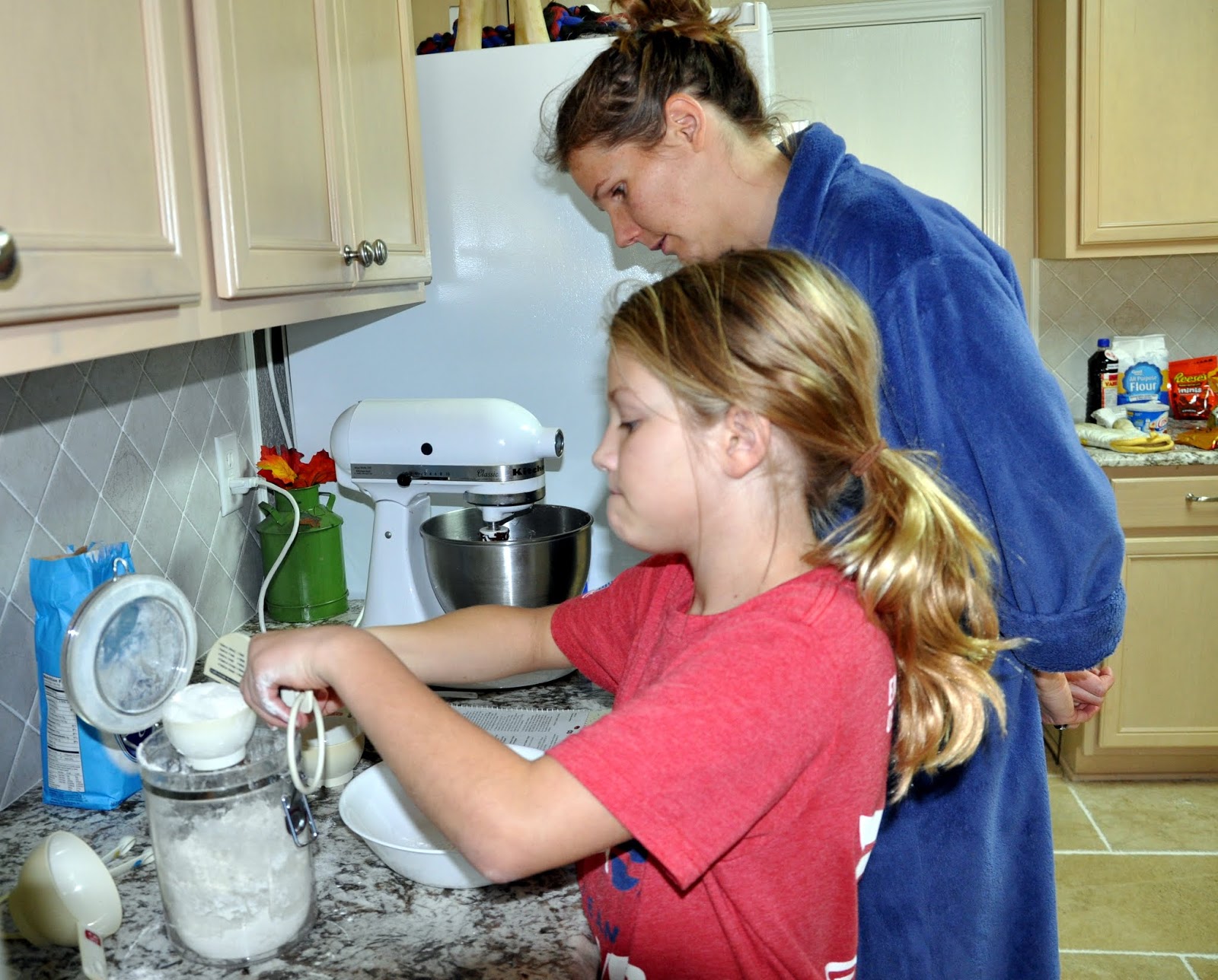 I had to leave before all the baking was done because I had dinner cooking at our house. We decided to have our big meal on Christmas Eve so that we could relax and just have leftovers on Christmas Day. 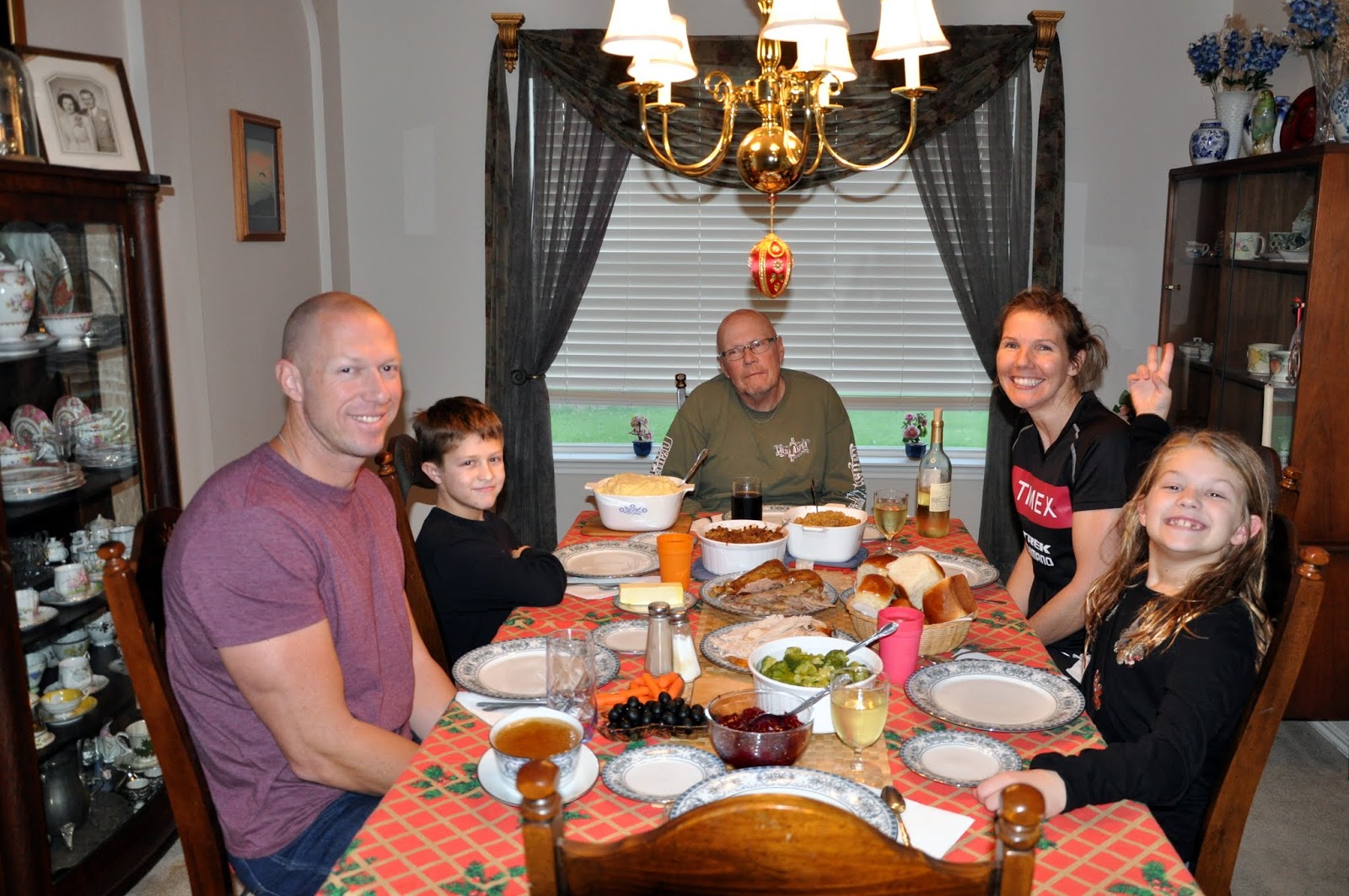 I made a crockpot breakfast casserole and cinnamon rolls after they went home. The next morning we went to their house and opened presents and had brunch. The rest of the day we relaxed at home and they came over for some more turkey that night. Hope you all had a great Christmas too!
by TravelingLongdogs Posted 12/29/2014 10:00:00 AM 1 comment:

Catching Up Before Christmas

Wow, it sure is easy to get behind on your blogging. Things have been going on in spurts. My son and daughter-in-law headed to Maryland for Thanksgiving. Son came back the following week but Helen stayed because her mother had to have surgery. She would have stayed anyway but, fortunately, she is able to telework so didn't have to take the rest of the month she was there as leave.

We had to go all the way to Brownwood so the grandkids could come for one weekend. On that Saturday we went to Gruene Tx for their Trade Days as well as to see the horse parade come through town. 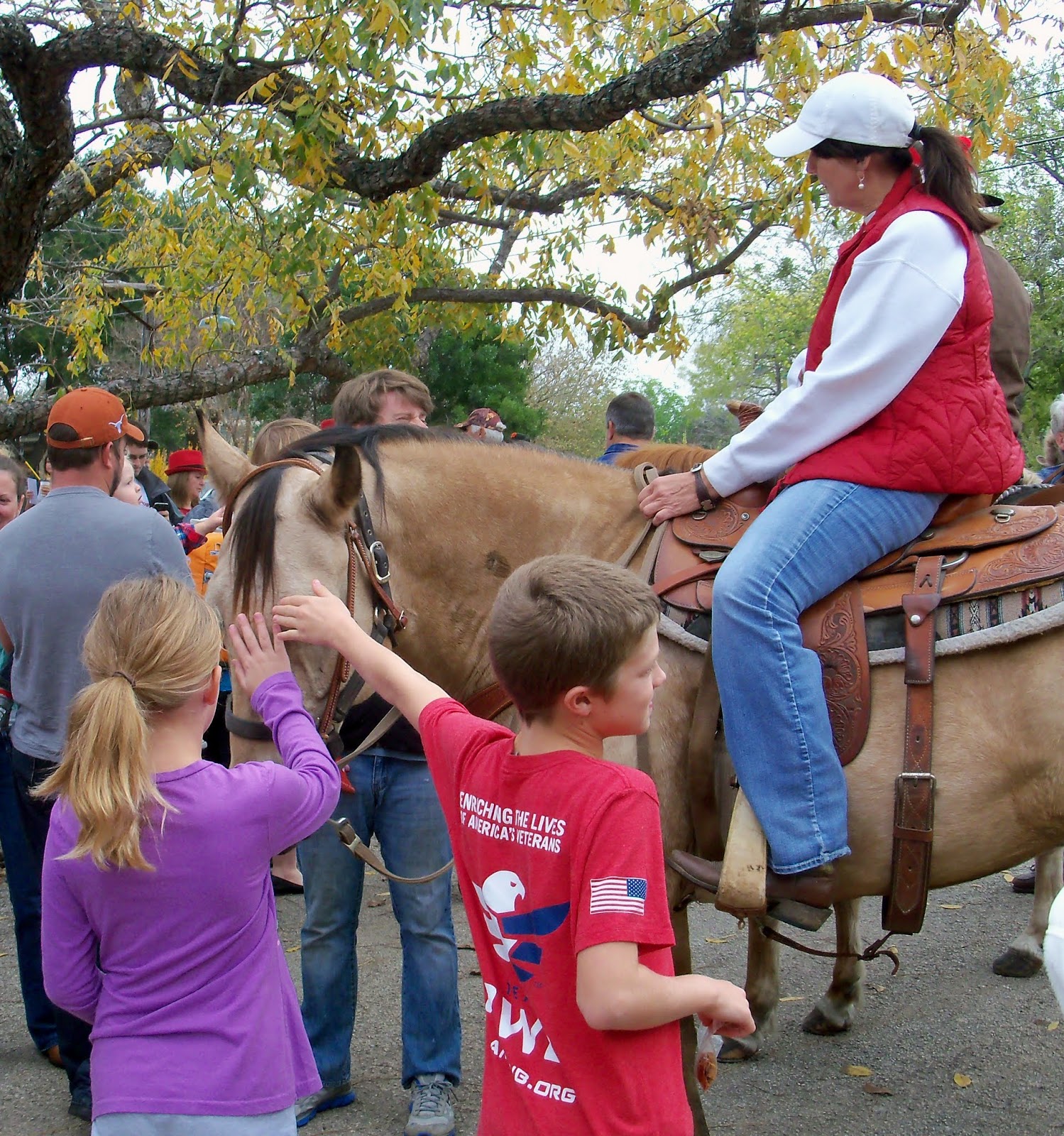 This should hve been my "The End" picture but I'm not done yet. :) 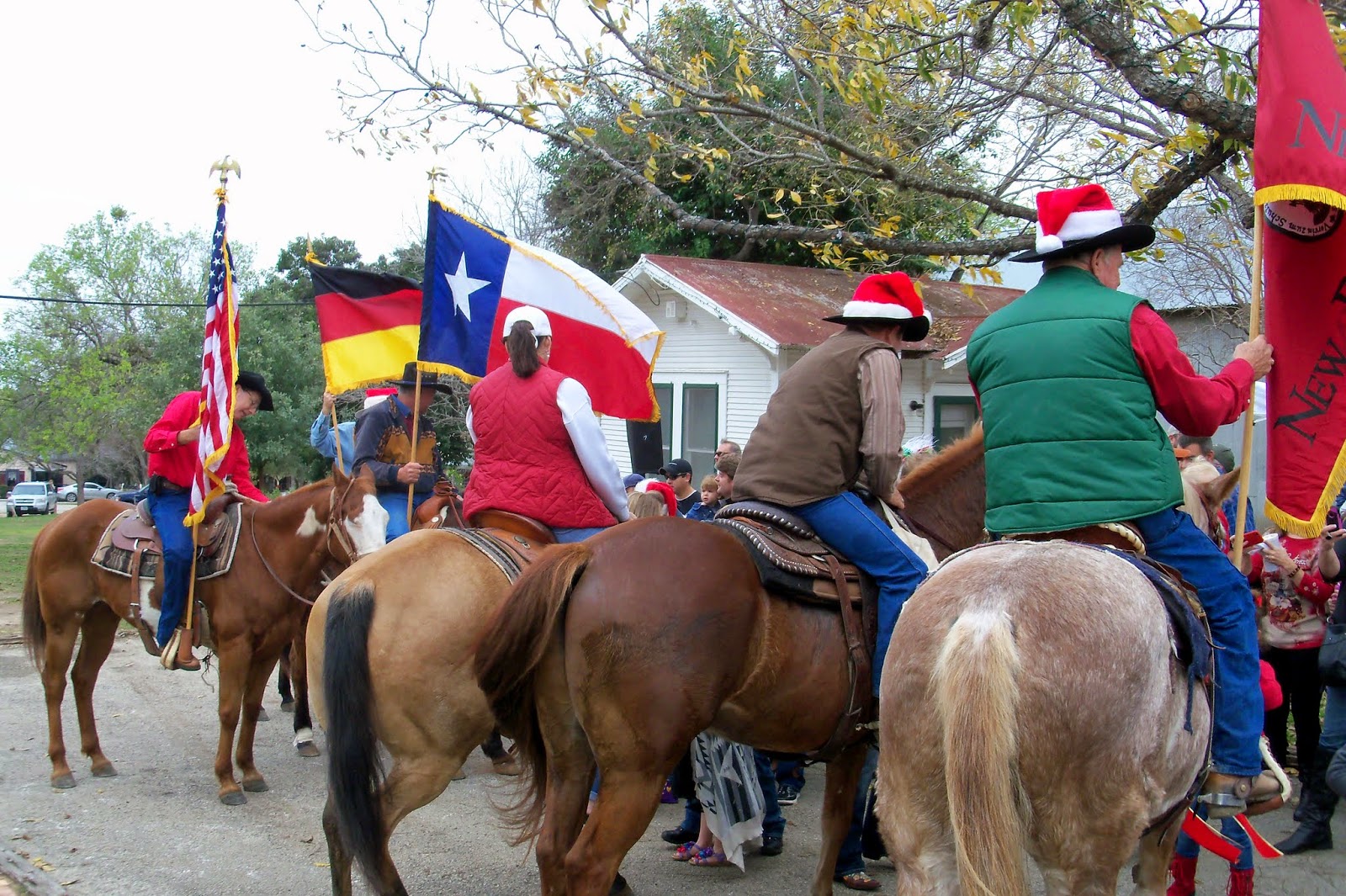 Everyone was excited to see the horses. 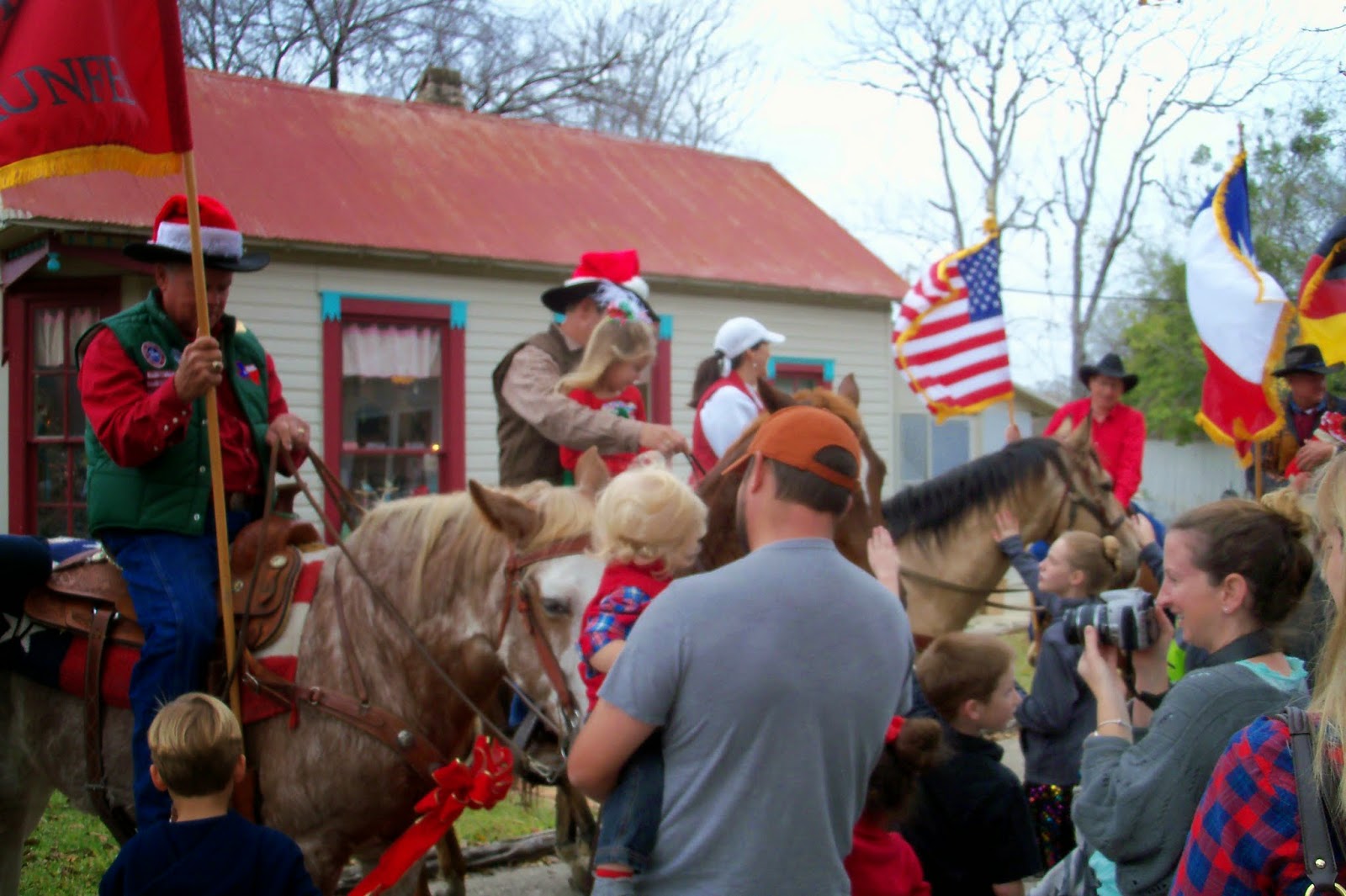 I even found a couple of items at the Trade Days for Christmas presents.

Then we had to make another trip to Brownwood on the 19th to pick up the grandkids for Christmas. Usually we meet their Mom halfway but this was another one of those special times. At this point we didn't think Helen would be back here for Christmas.

Steve and I took the kids down to the Farmers Market at the Pearl Brewery the next day. It was a little smaller than some we have been to before. Steve's dog Angus and my Willy got to tag along as it is pet friendly there. 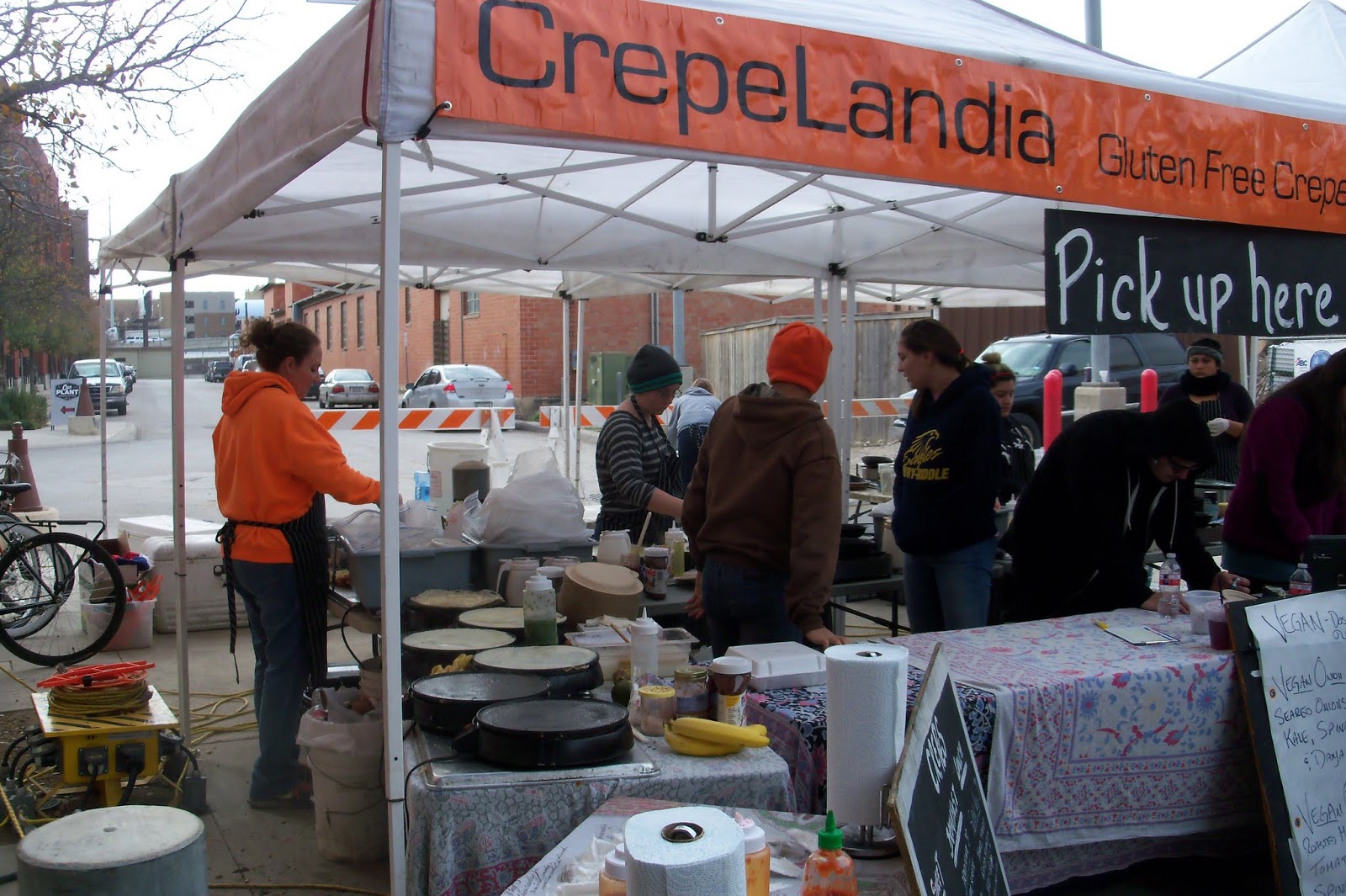 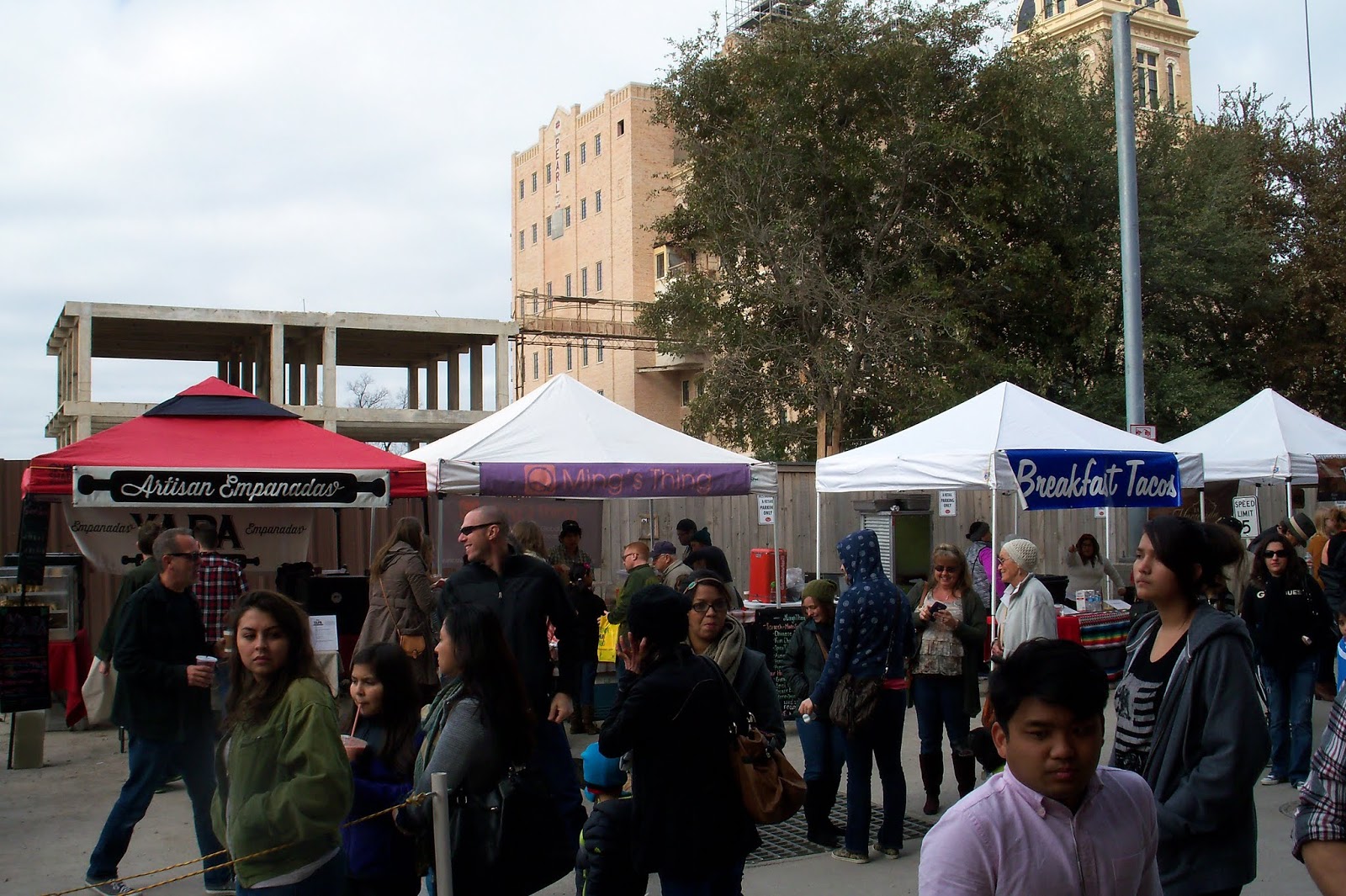 We also went to the Festival of Angels Parade in Schertz. It was a bit skimpy this year. The weather was warm which made it nice waiting for the parade; however, there was supposed to be a snow hill but it was melted down to a really big puddle. 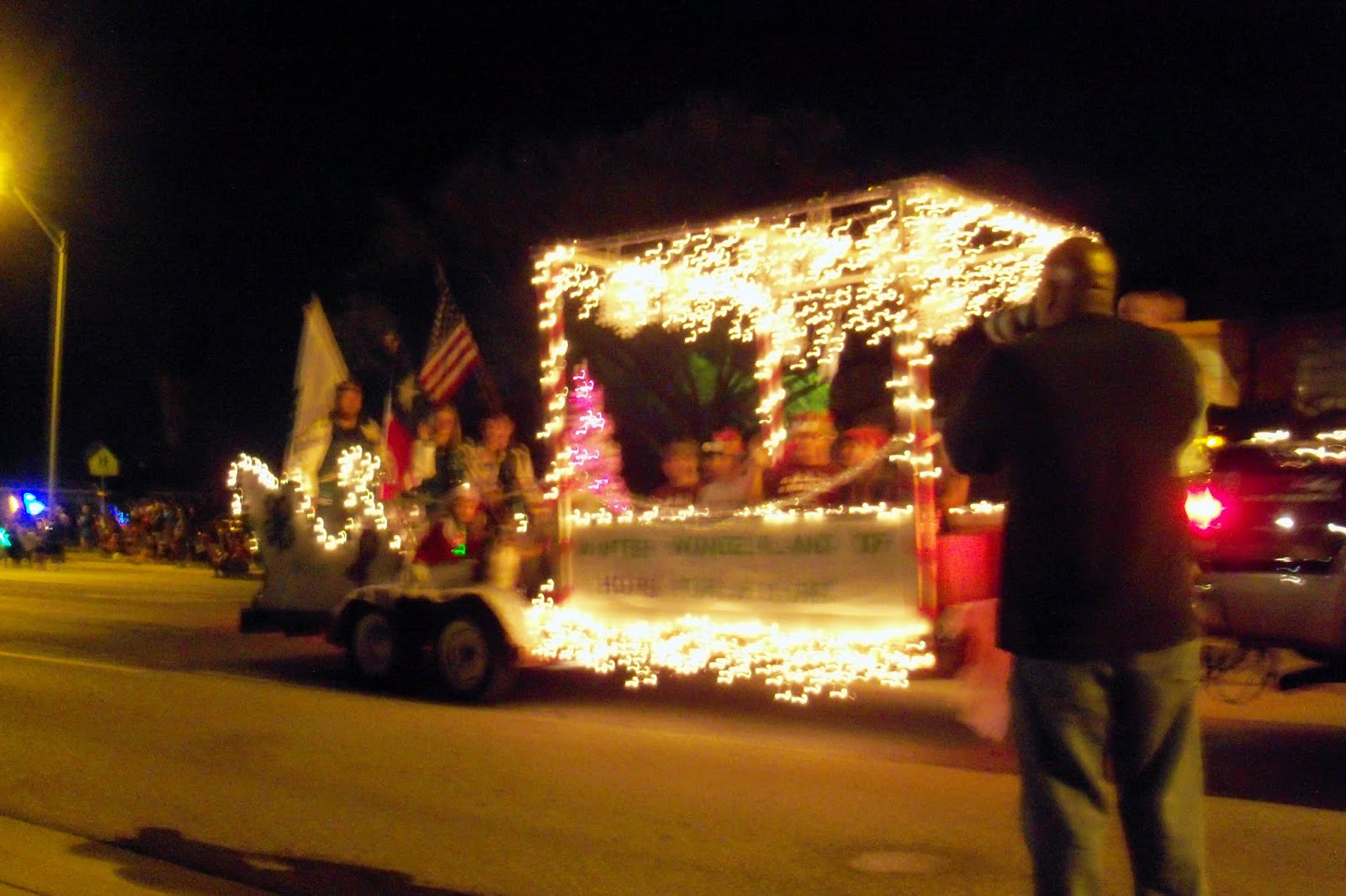 This is Willy (bossy dachshund) and Angus (big blond guy) discussing their day at the Pearl Brewery. There is nothing quite like a little dachsie prancing along next to a big guy like Angus to make people sit up and pay attention. They both got more than their share of pats and positive feedback much to their delight.  They both love to meet new people and dogs. 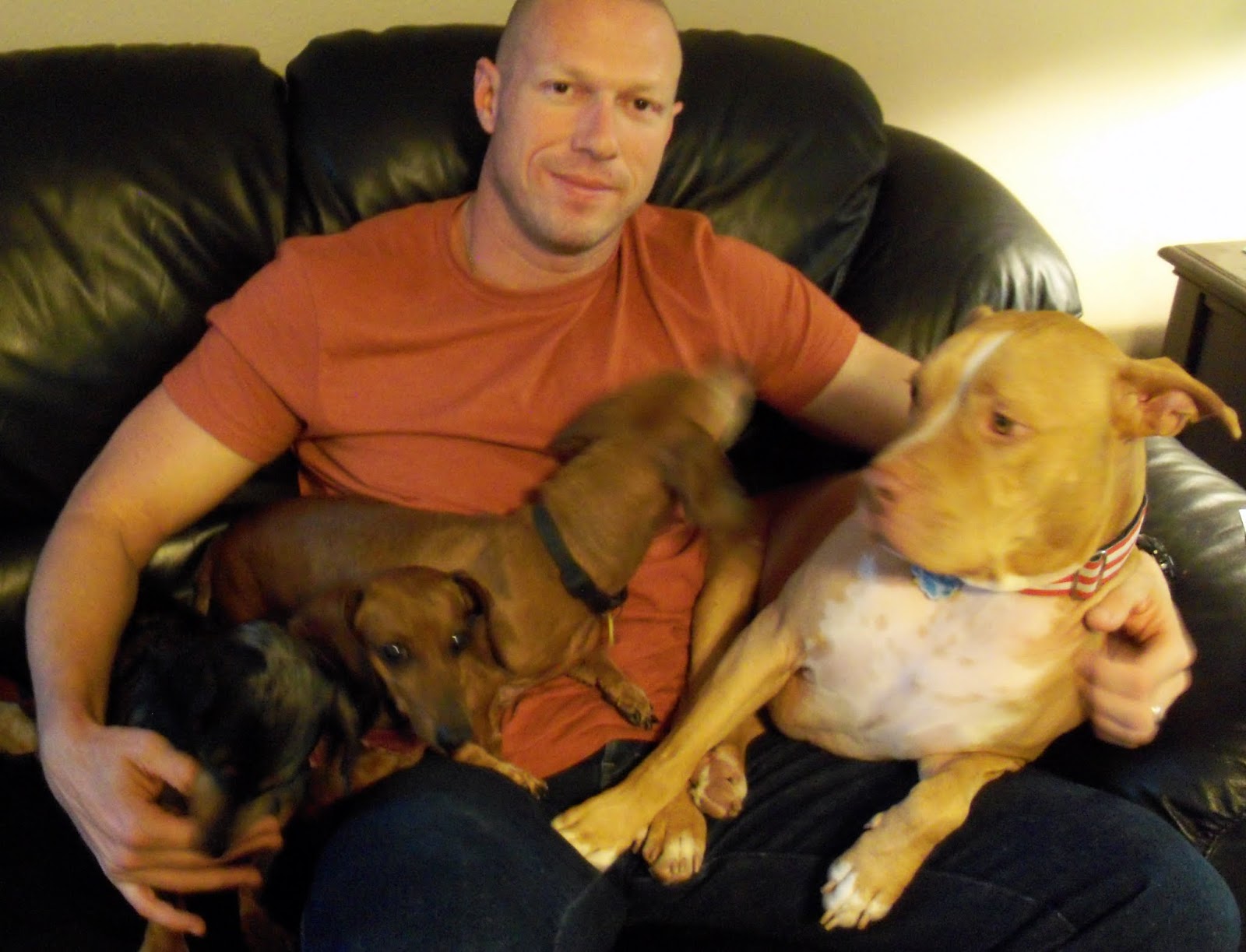 Here is everyone posing with Steve. Every once in a while the dachsies remind Angus that Steve belonged to them first but they are willing to share. Aren't they a handsome group? 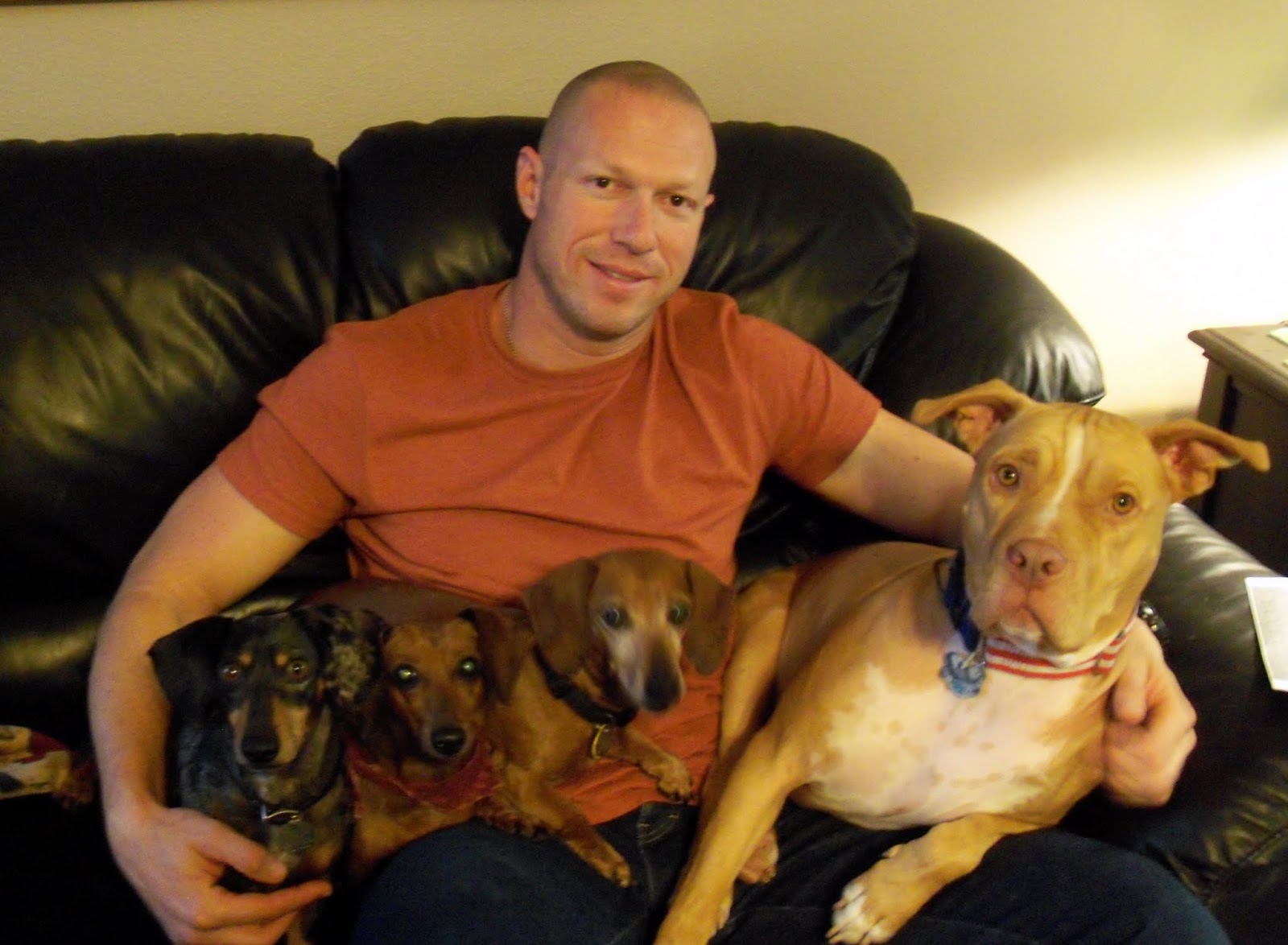 Wow, how time flies.  I can't believe that it has been so long since I wrote a blog post. The day sometimes seems to drag by slowly and then, in an instant, the week has flown away.

Since my last post, we've celebrated a birthday, no, not mine. We celebrated a few days early since the grandkids were here in San Antonio for the weekend. It was the big 11 for Cam. Steve grilled up some great steaks for dinner....Cam's favorite meal and his Dad does them up like a pro. 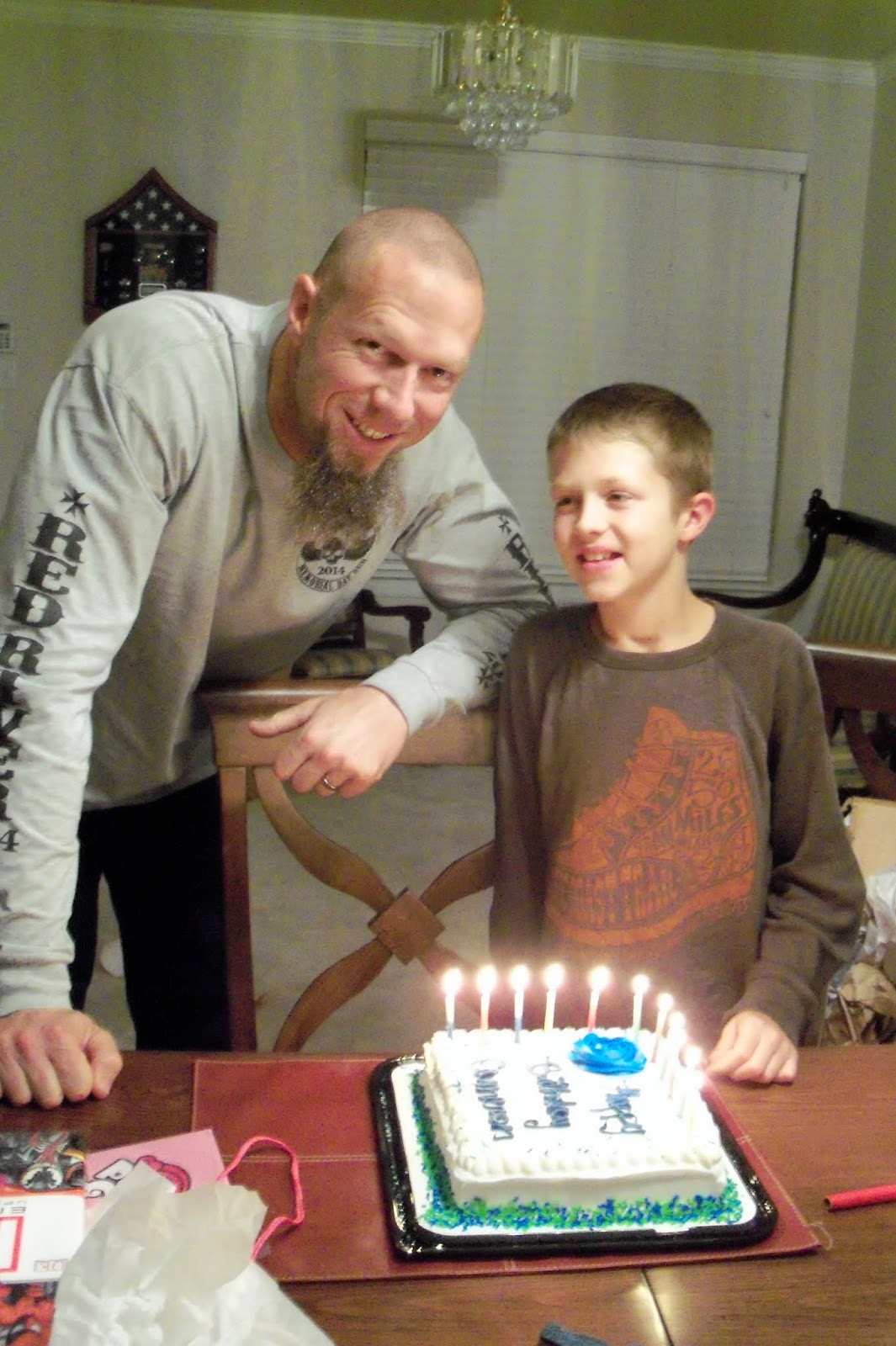 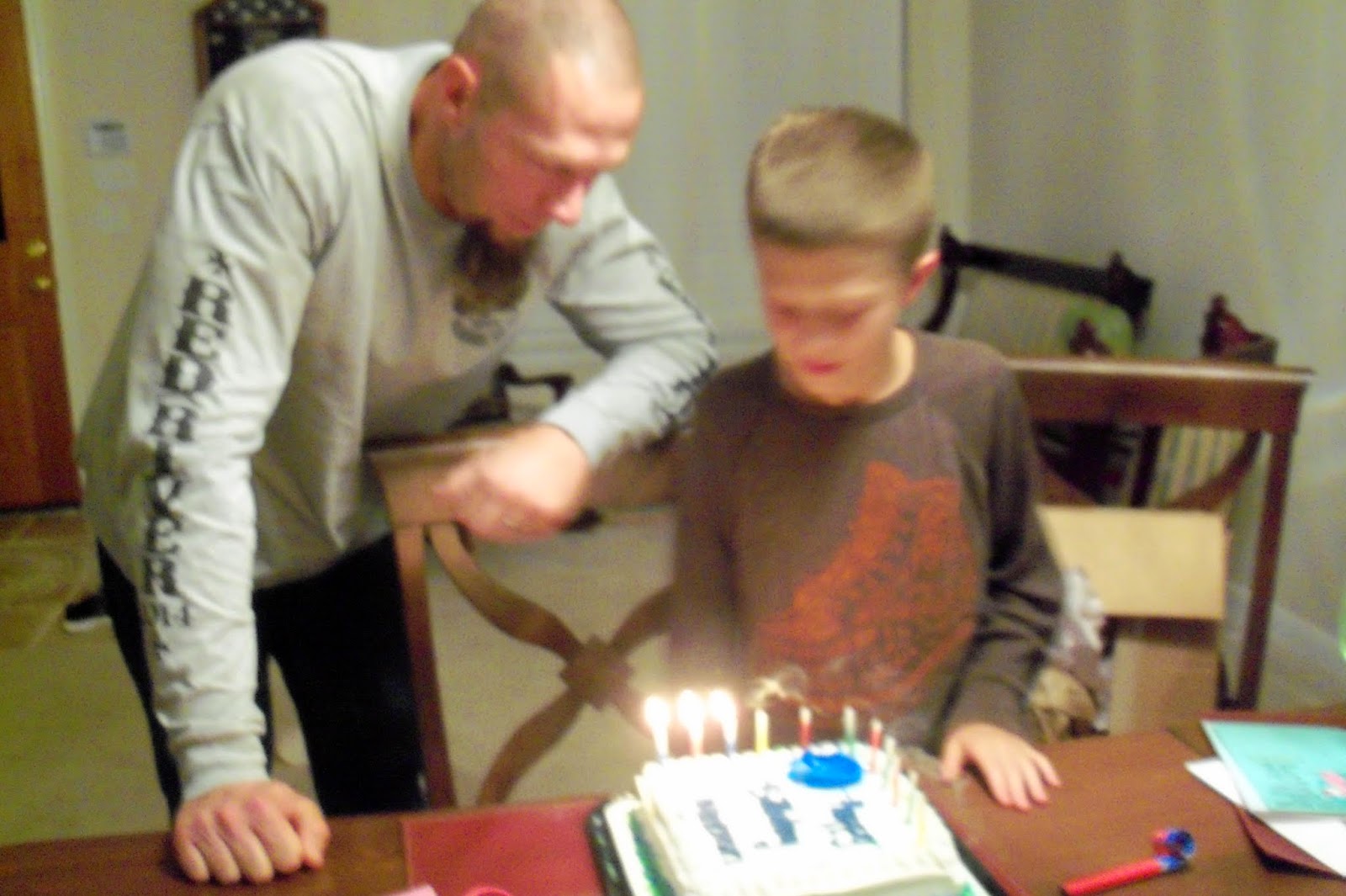 Then we did "presents". 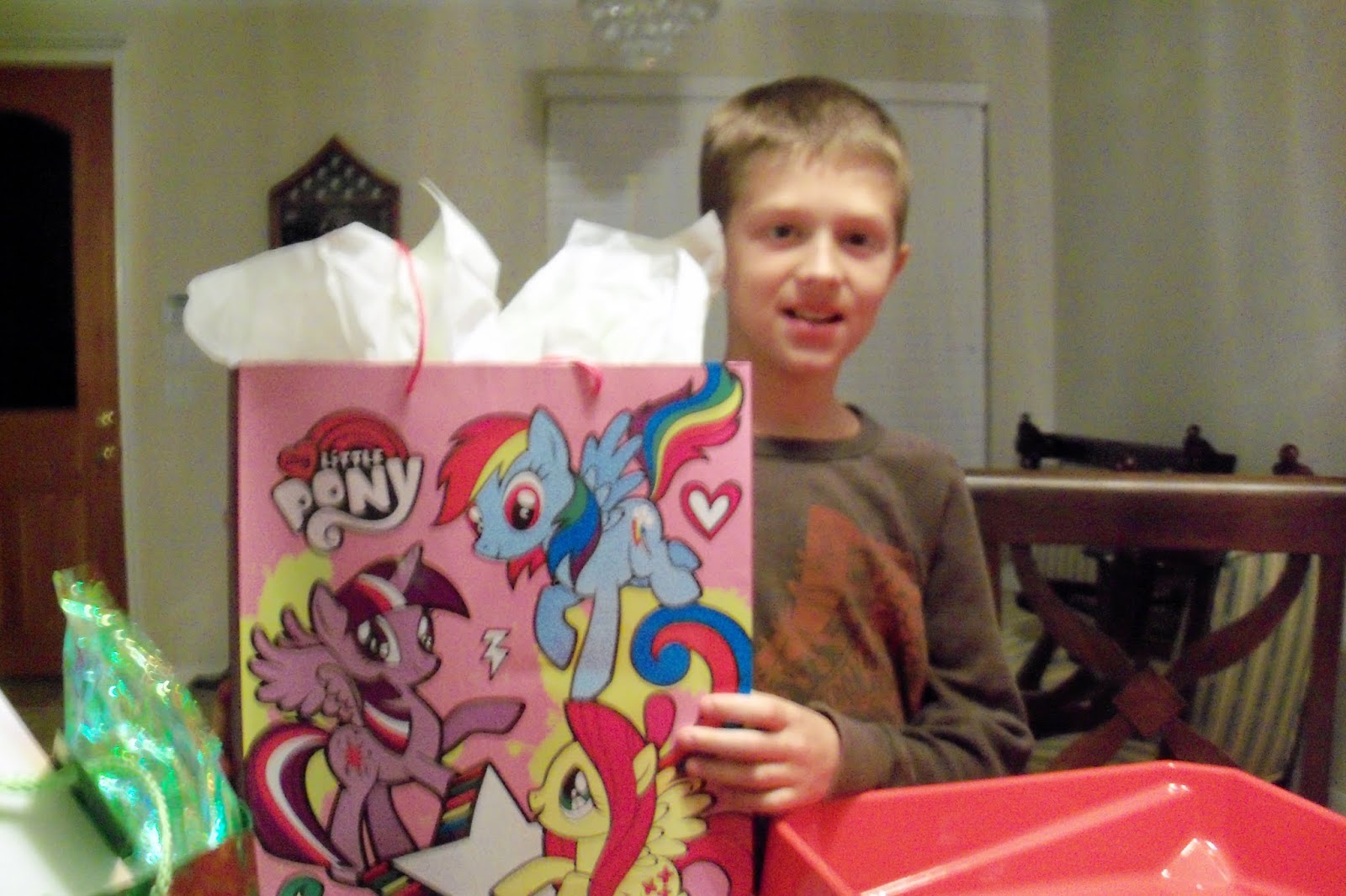 And the big finale was a movie. Everyone, including Cameron, had a great time but then he is very easy to please. I couldn't ask for a better grandson.

Then we moved on to Thanksgiving. The grandkids were with their Mom this year and my son and daughter-in-law flew to Maryland to spend the holiday with Helen's mom. Have to share you know. "My Buddy Angus" stayed with us for the week....always an interesting experience. Angus is Willy's best buddy, Gretchen is willing to share a lap, and Harley is trying to be open-minded. He definitely likes Angus's toys

We shared Thanksgiving Day with our long time friends Bob and Loretta and their family. Bob and Loretta are the "family you get to choose". Those of you who have been in the military will easily understand this as you are often far away from your own family. RVers often find themselves in similar situations and those friends tend to last a lifetime.

We had turkey with all the trimmings and enough food for an army. Sorry, no pictures, but believe me....it could have been a restaurant buffet. It was a wonderful day. Thanks again for good friends.
by TravelingLongdogs Posted 12/01/2014 02:22:00 PM No comments: