Saturday Steve, Helen, Morgan, Dave, and I plus Angus headed up to Luckenbach for the Harvest Classic Motorcycle Classic. I think it is Dave's favorite rally so he and Dave were really looking forward to it. Unfortunately, they were charging $20 each to get in.......not at all what we expected since it has never cost very much before. Helen and I decided to go to Fredericksburg and we gave Morgan the choice of coming with us or staying with her Dad. She decided she would rather go with us. The guys rode up front while the gals rode in the backseat. Angus thought he was hot stuff up front. 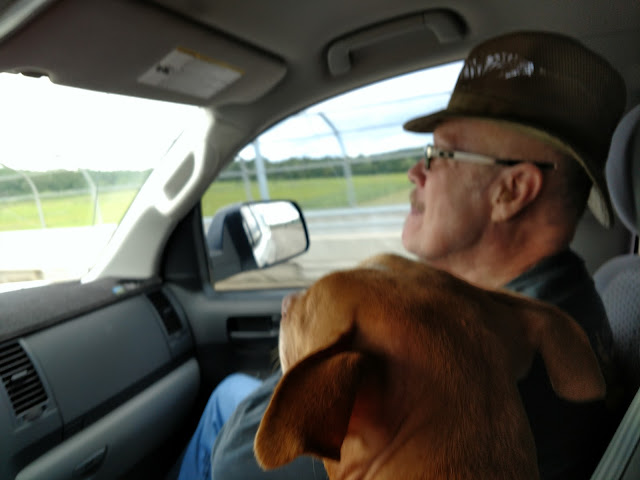 I thought I knew Fredericksburg pretty well but Helen took us to a restaurant I didn't know anything about. It is both an antique shop and restaurant. 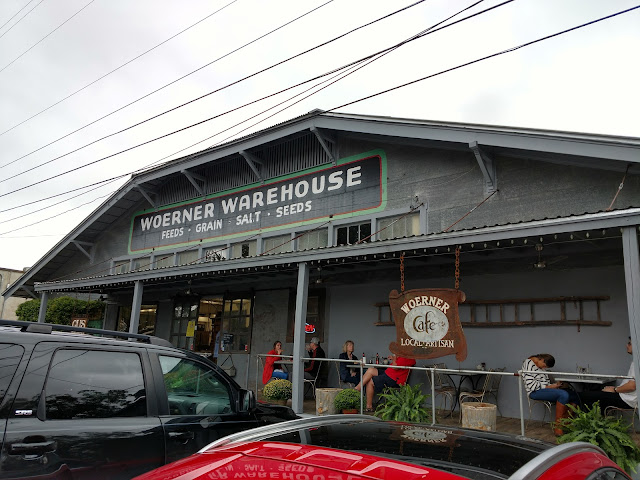 They were decked out for Halloween. 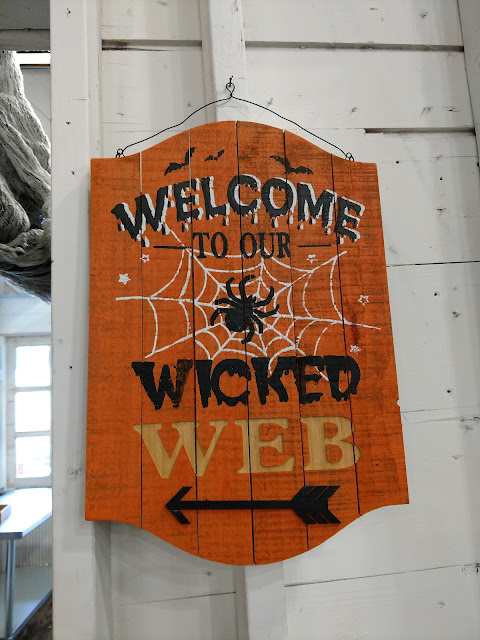 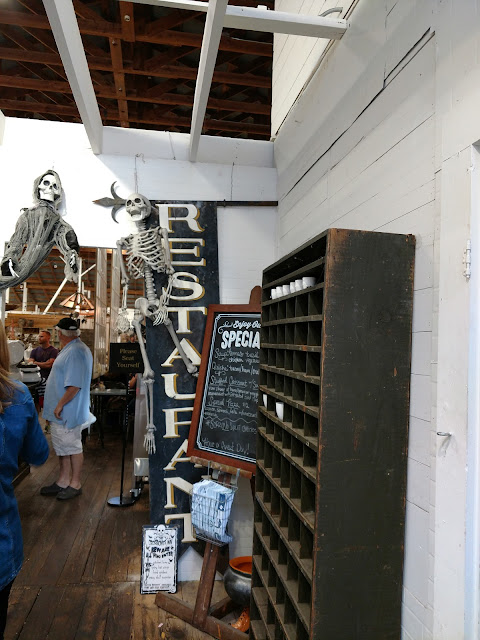 The furniture is very rustic as is the whole place. 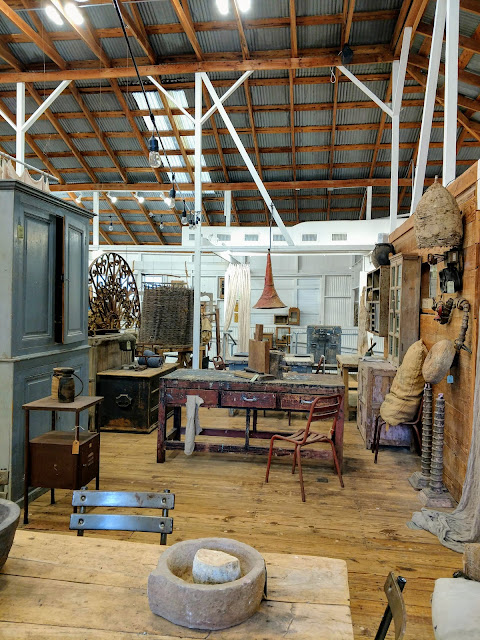 Yes, this chair with exposed horsehair stuffing was for sale for a pretty price. 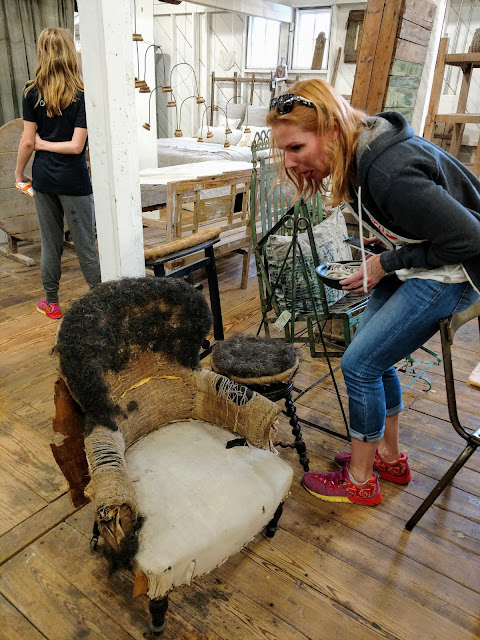 The café is also a bakery and the food was very good. 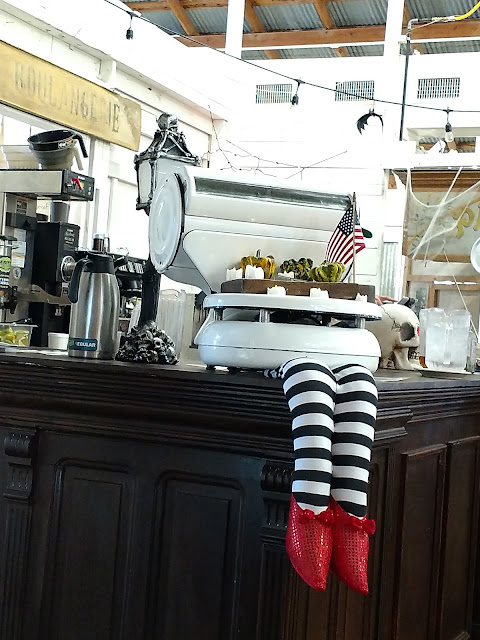 It is a popular place to eat with a wide variety of choices. 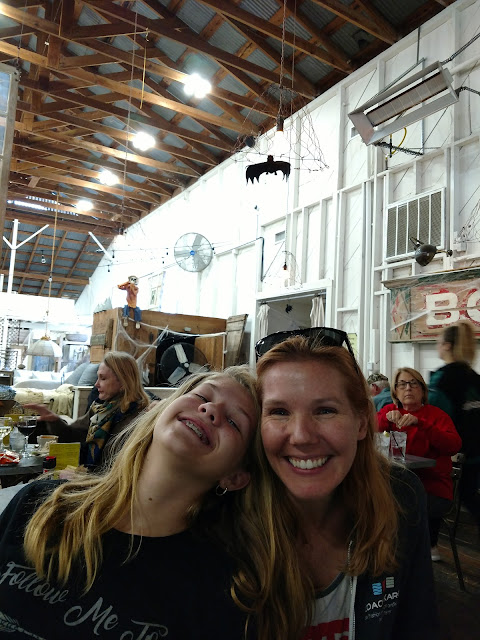 Right across the street was an old laundry redone as a furniture store. 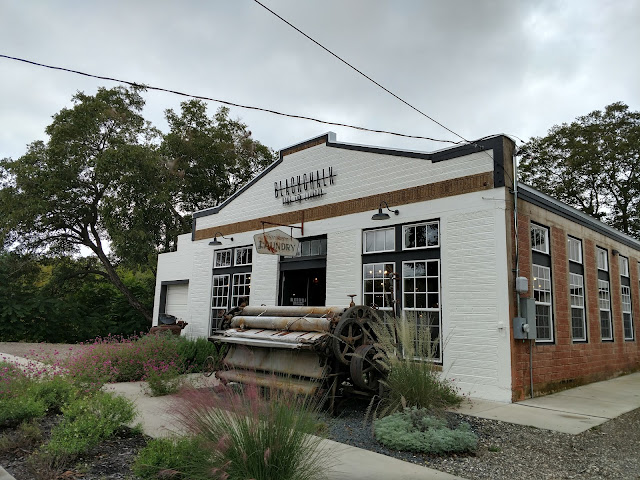 After lunch we walked around downtown which is always fun. 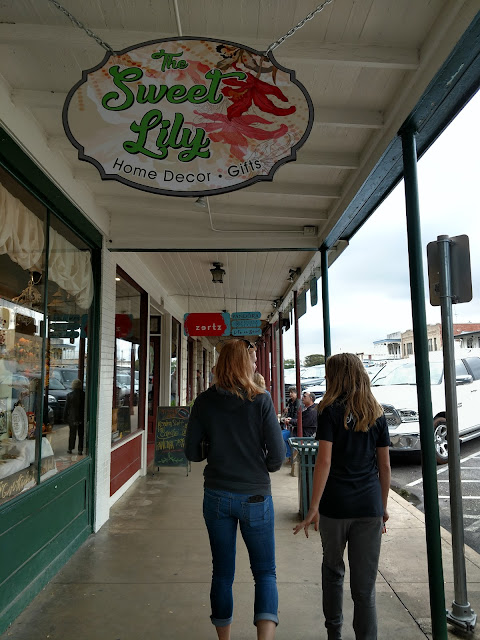 Some of the stores downtown were also decorated. 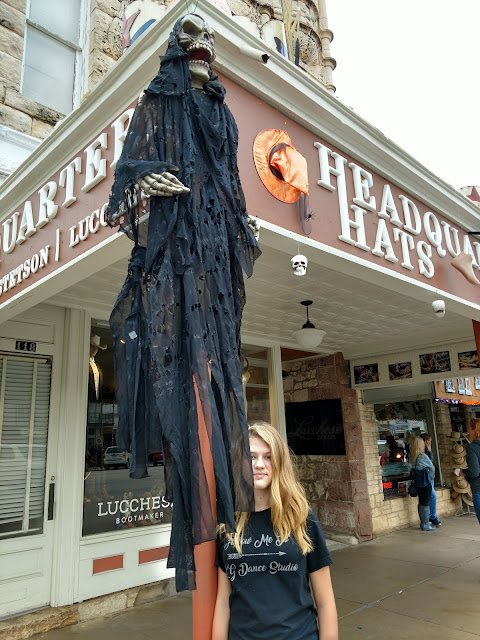 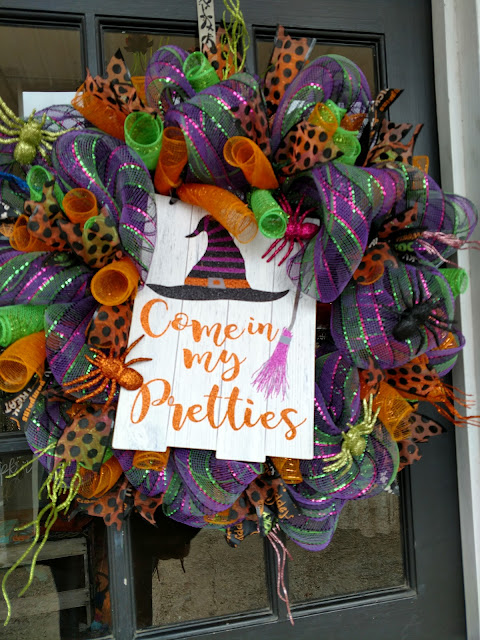 The Pacific War Museum sure has grown over the years. There is a lot there besides just the main building. Plan on a whole day if you want to tour it. 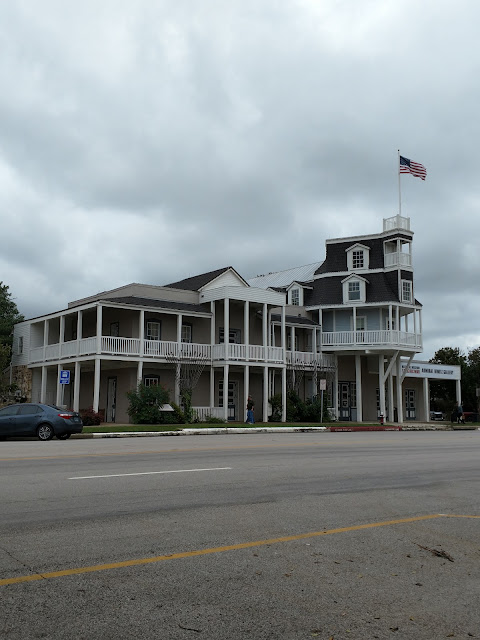 Everyone loves the Hill Country. 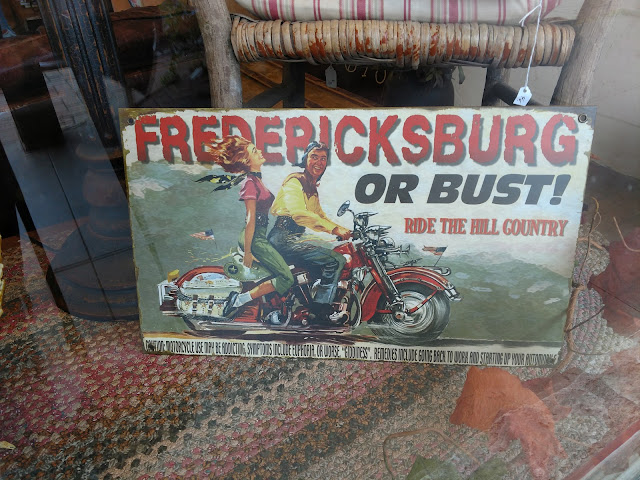 We stopped in at the pet store downtown. Angus waited in the truck for us......he was napping in the cool weather. Speaking of an unusual cool spell. Angus got a new sweater.....he is not fond of being cold just like the weeny dogs. 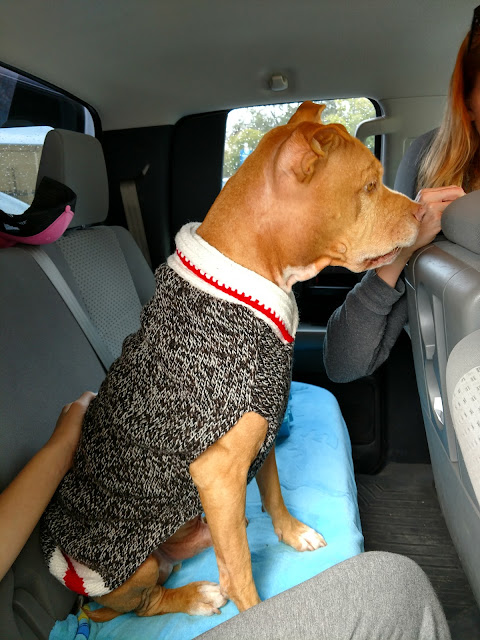 There was a neat hat too but unfortunately it was too small. It was pretty cute too as it was a sock monkey hat. 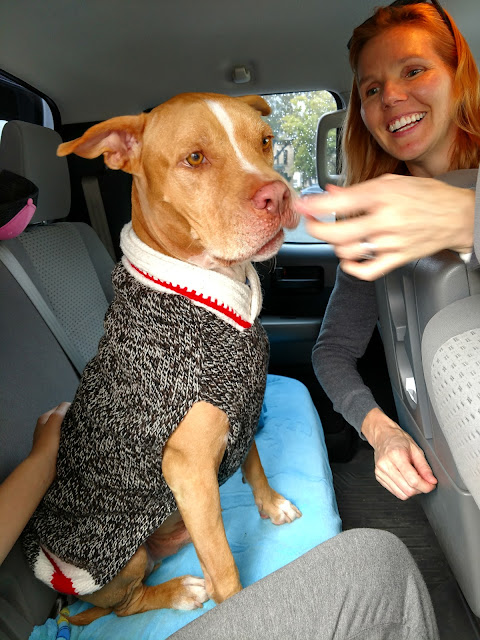 All Good Things Must Come to an End

Saturday was a very busy day. Many of us gathered at 10:00AM for a meeting about a possible rolling rally but, due to a misunderstanding, the presenter was not available. Some of the group gathered to play games while others just got together to visit and some went to sight-see around the island. After lunch, one of the hostesses set up a sand dollar painting project. She went all out with lots of acrylic paint sets and a variety of paint brushes. And, her collection of shells, let's just say she has quite a collection. I introduced Carolyn to rock painting while we were in Rockport so she was all set to give this a try. Marlene watched the rock painting at the other rally so she was ready to give this a try too. Sand dollars have a natural design which some of us in a lot of different ways. 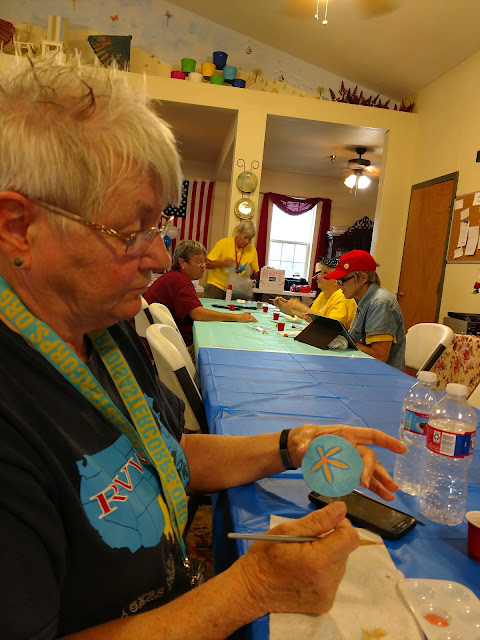 Some of the ladies used sand along with the sand dollars and other shells to create something very different. 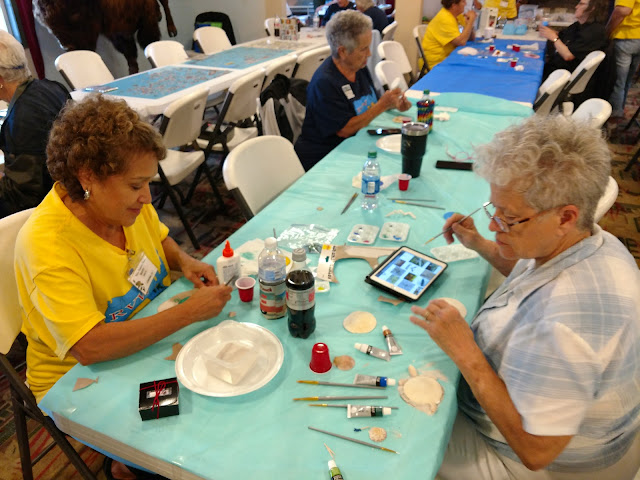 One of the women turned her sand dollar into a very unique pumpkin. Check out the lady in the white hat. 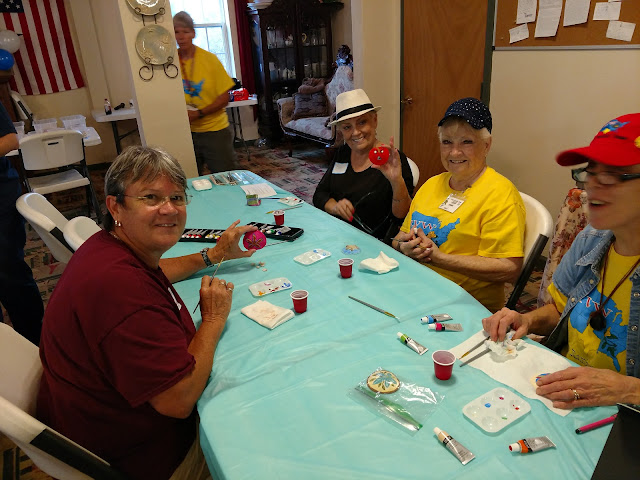 In between the inside fun and the rain, I managed to get the dogs out for short walks. We were going to have an "Open House" for members but it was cancelled due to rain. You don't exactly want a lot of people walking into your rig in the rain. During one dry period, one of our group members volunteered to show us her "new to her" Casita. It was really cute but inside and out. She really turned it into her own little castle. 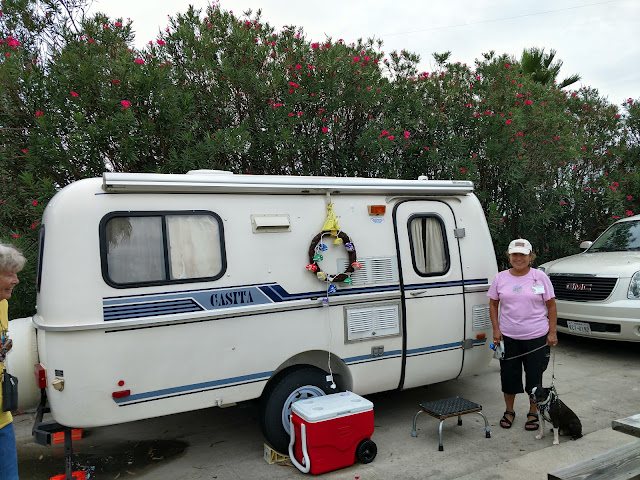 I have been to Jamaica Beach before and remembered a very large tortoise in a pen near the miniature golf course. Well, I found the tortoise and he has moved up in the world. He has a very nice area with lots of space and varied terrain along with a house. 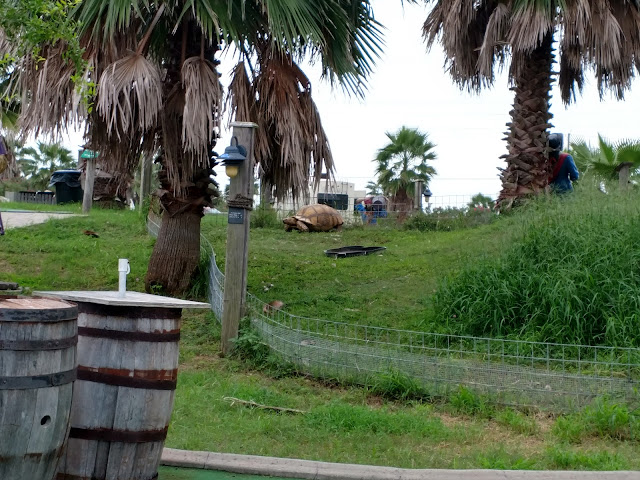 The miniature golf course is popular when it isn't raining. Did I mention they have two hot tubs.....one is in a building and is as large as a small swimming pool.  They also have a Lazy River which due to weather, we didn't even get to see up close due to rain. 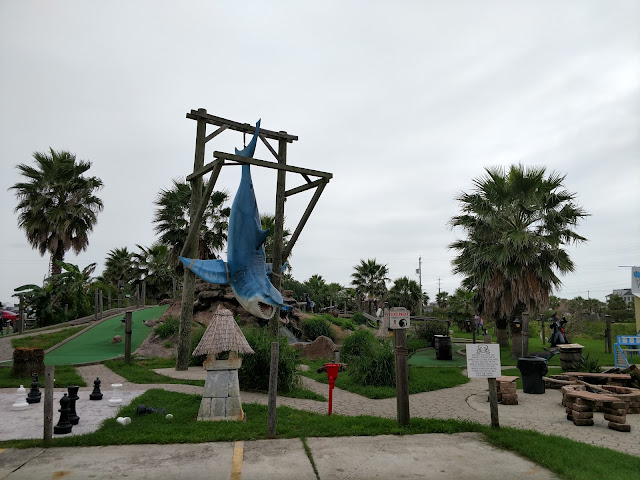 Saturday night we had a great group dinner with the hostesses providing pulled pork and buns as well as some potatoes and everyone else bringing either a side dish or dessert. Needless to say, it was quite a feast.  Sorry, I really fell down on the job as far as pictures go.  We also played Bingo and the hostesses provided some nice prizes. We even had a couple rounds of dog Bingo where the cards had pictures of different dog breeds. I have to admit that I had never even heard of some of them. Lori did a great job of pronouncing some of the unique breeds.

On Sunday morning, the hostesses provided a "hitchup" breakfast of scrambled eggs, biscuits, and cinnamon buns. Some of the group left Sunday morning.  The rest of us played games Rummikub was very popular. Others worked on jigsaw puzzles. Sunday night the remainder of the group went to Nate's West End Bar/Grill for dinner. There were about 33 of us there. The was good and the waitress did a great job of taking care of all of us. 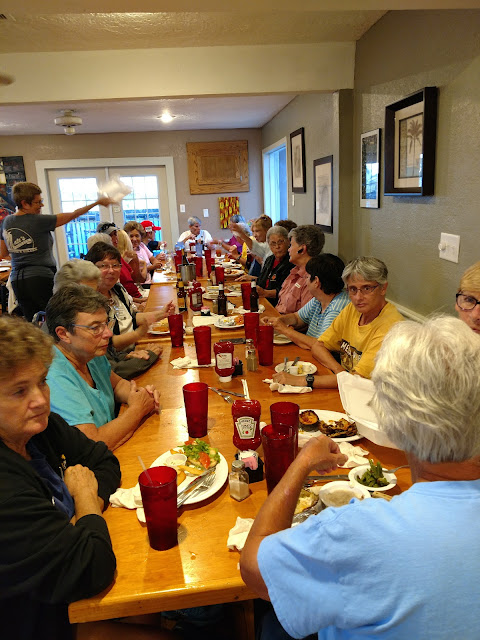 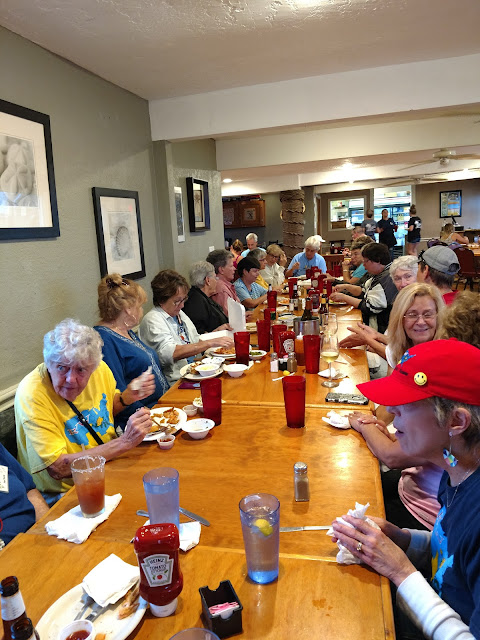 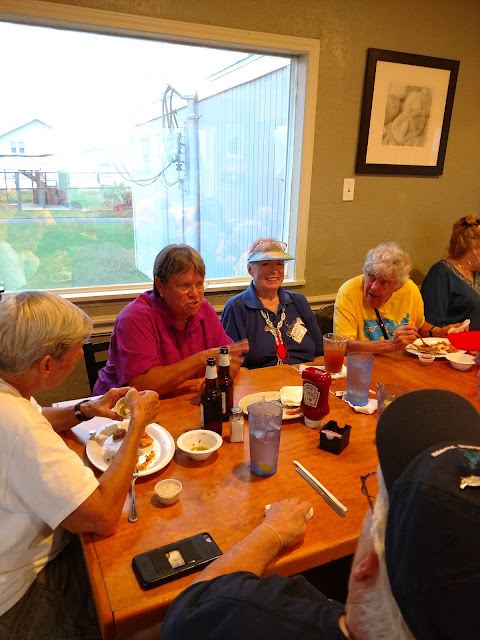 One would think with a picture like this on Sunday night that Monday would be a great day.....not so. It was pouring with rain. 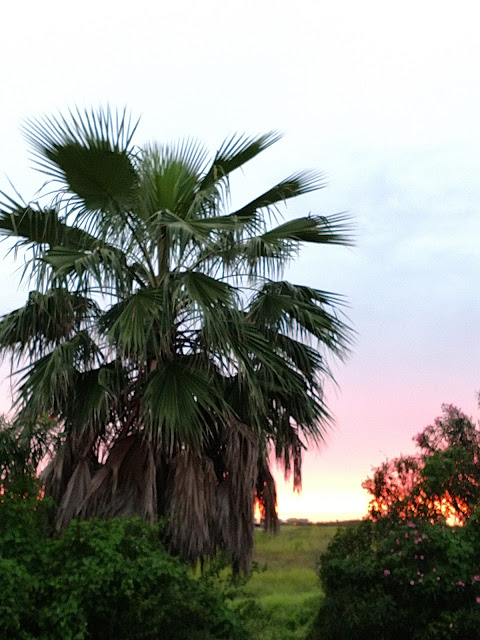 The rally was great in spite of the weather. Unfortunately, I had a little incident when leaving in the pouring rain. Someone parked where they didn't belong and I was watching out for their car so closely that I missed the fact that a concrete barrel was too close to my 5th wheel as I rounded the corner......way too close. I was driving so it was my fault that my pretty RV has a big boo-boo which will have to be fixed.  Interesting enough, the people with the car parked where it didn't belong flew out of the RV where they were visiting, and raced off in their car. I also have to thank my fellow Texas Ramblin' Roses who came out in the pouring rain to help me get unhung.  Not one of the other RVers came out......even those in the trailer where the wrongly parked car was visiting. I also heard that another RVer had a run in with the concrete later that day and did a huge amount of damage to their RV.  I was very upset that I messed up my RV but stuff happens.
by TravelingLongdogs Posted 10/02/2018 08:21:00 PM 1 comment: