Back to the Pearl 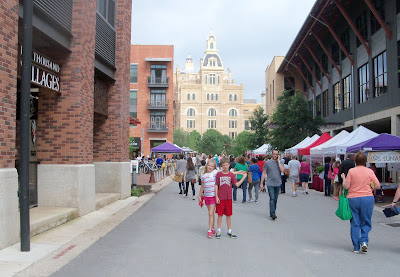 Looks like these folks have been here for awhile and already done some of their shopping. 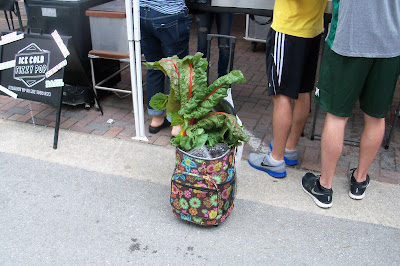 You never know who you will see walking around. These huge dogs have been here several times when we have visited. They are really well behaved and popular with the crowd. 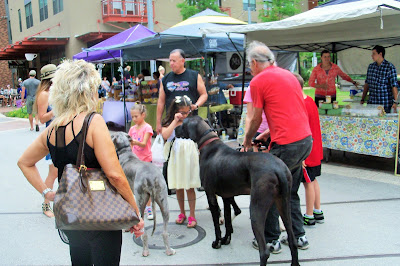 The booths are scattered around on several different streets. These particular ones are food booths. 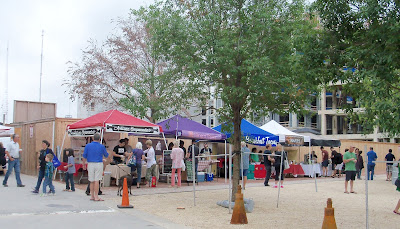 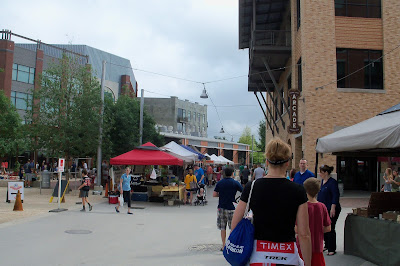 This beautiful building was the stables for the original brewery. So far it hasn't been open while we have visited. Some day we will manage to see inside. 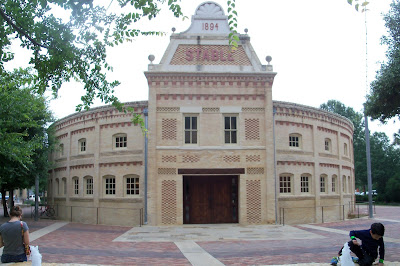 This area has fruit and vegetables booths as well as some booths where you can order specialty meats. 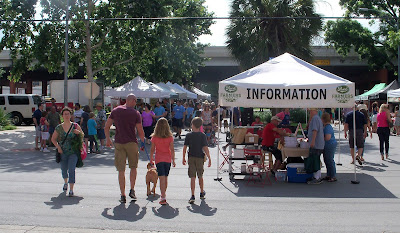 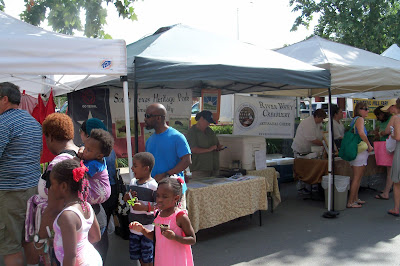 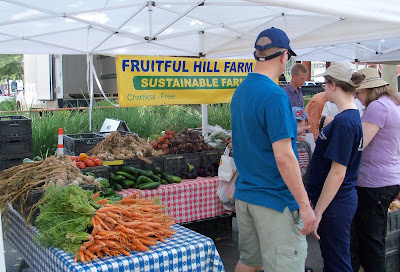 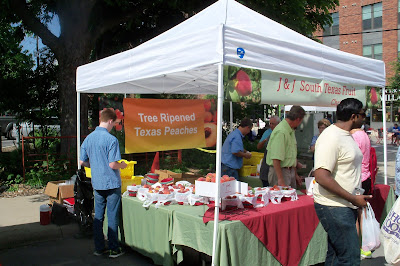 There is even entertainment (other than the people visiting, lol).d 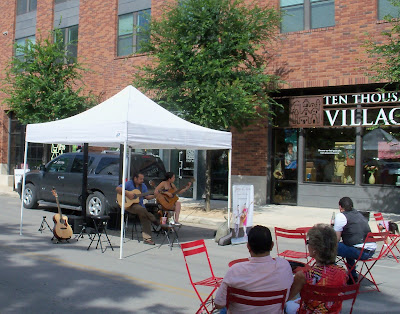 The whole Pearl Brewery area has developed into urban living with lots of buildings converted to apartments and condos. There is a "Locals" coffee shop right within the Farmers Market area that is very popular. There is also another coffee shop called "Brown Coffee Company" which is apparently very well known among coffee aficionados. We walked over from the Farmers Market to give it a try. It was definitely different from other coffee shops, not cheap but good. 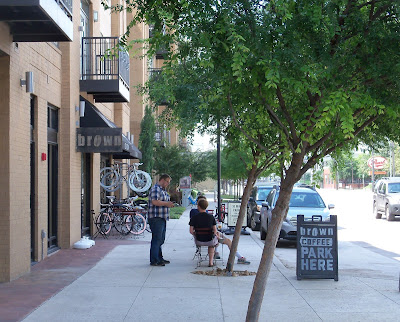 Texas, or at least parts of it, have been getting a lot of rain.....a lot. Here in the San Antonio area, we are 10 inches ahead of what we usually have this time of year. North Texas has gotten even more; the lakes up there are pretty much full. Now, we haven't been that lucky here. Our lakes are still very low. In any case, along with that rain comes a lot of dark weather. Again, not something we are used to having here. After a long stream of cloudy, rainy days, I was more than ready to get out of the house. I loaded up the Traveling Longdogs and their buddy Angus and headed out for a little drive. 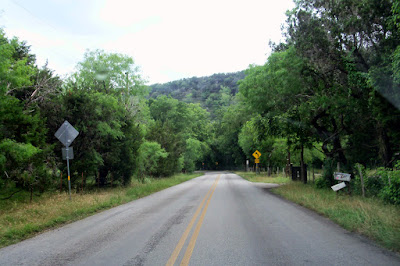 We stopped at Buckey's in New Braunfels for gas and then headed out to Sattler on FM306. Once in Sattler, we turned onto River Road. River Road is always a lovely drive....it makes you feel like you are in a different place. There are a number of "crossings" back and forth across the Guadalupe River.
The river is quite high right now but not flooded. They were worried a day ago and, if the rain continues, it may get to hat point. 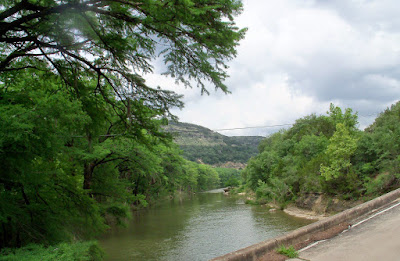 There are a couple of farms along this winding road; however, it is mostly a recreational area with lots of cabins and RV places along the way. 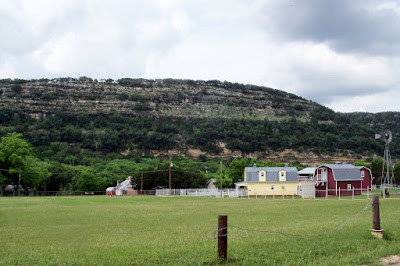 Someone put a flag out across the road. It's not sunny but it isn't raining and the sky is lighter. 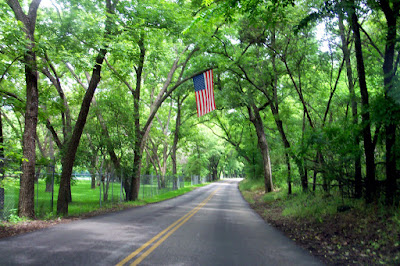 Hmmmm.....it says General Store but I'm guessing it provides mostly beer and picnic type items for the vacationers visiting along the road. 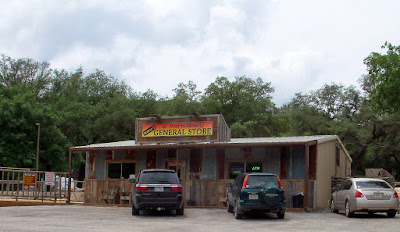 Almost every inch along the road is privately owned so access is usually through staying at one of the places along the road or using one of the toobing places that do pick-ups and drop-offs. I'm not sure why I didn't get any photos of toobers but they were out there. 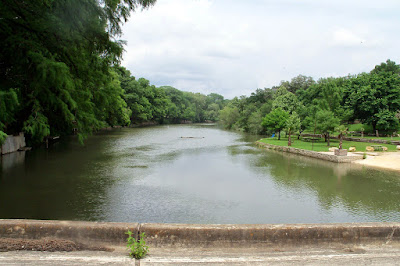 All in all, it was a lovely relaxing afternoon and a great way to get out of the house in between rain showers. Traffic was minimal so I was able to stop and snap some photos along the way. 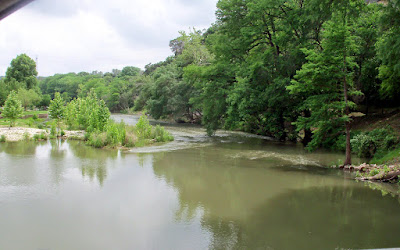 The Rest of the Story

After such a disruptive beginning, the rest of the weekend went great. Steve and Helen arrived late afternoon on Friday and quickly set to work setting up their tent. It's a pretty big one that can actually be divided in half but it goes up quickly and easily. I put my patio mat out in front of it so dirt wouldn't get tracked in. Angus thought that was a perfect place for him to lay. Unfortunately I neglected to get any pictures of the whole set up all weekend. After they were done getting things set up, it was time for them to head up to Marble Falls to pick up the kids. As soon as they turned on the road heading towards Canyon Lake, Morgan had it all figured out that they were going camping!  The kids ate coming down with their Mom so they were able to hold out on dinner until they arrived back at the park. I started a campfire before they got there so it was burned down enough to roast hot dogs.....a thrill since we are usually under burn bans when we are out camping.
Saturday, Helen was talking about swimming and they had reminded the kids to bring their swimsuits with them. I didn't figure it would be warm enough in the water so didn't worry about a swimming spot. We headed over to the beach area only to find that it was really non-existent with the water being down. The area exposed by the lower water was really rocky (sharp rocks) so that really wasn't doable.
﻿ 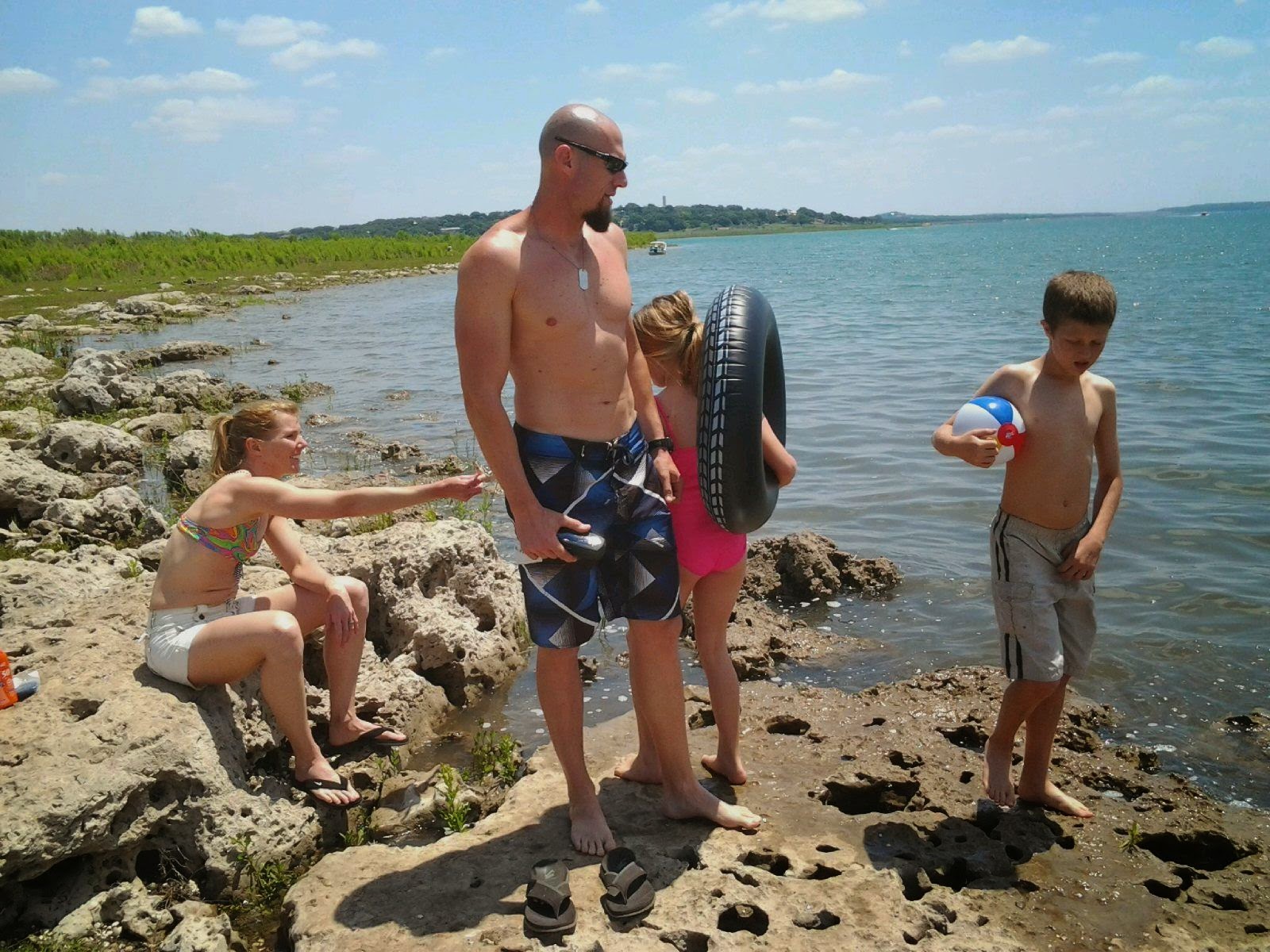 We ended up going back over by the boat ramp which we really don't like to do but it was about the only place that you could get in the water and there were other people there. So....keeping a sharp eye out for anyone needing to load or unload their boat, the grandkids got in the water. Steve got his feet wet....Helen didn't get anything wet and neither did I. It is only the very beginning of May after all and Canyon Lake is a big deep lake so it was too cold for us. 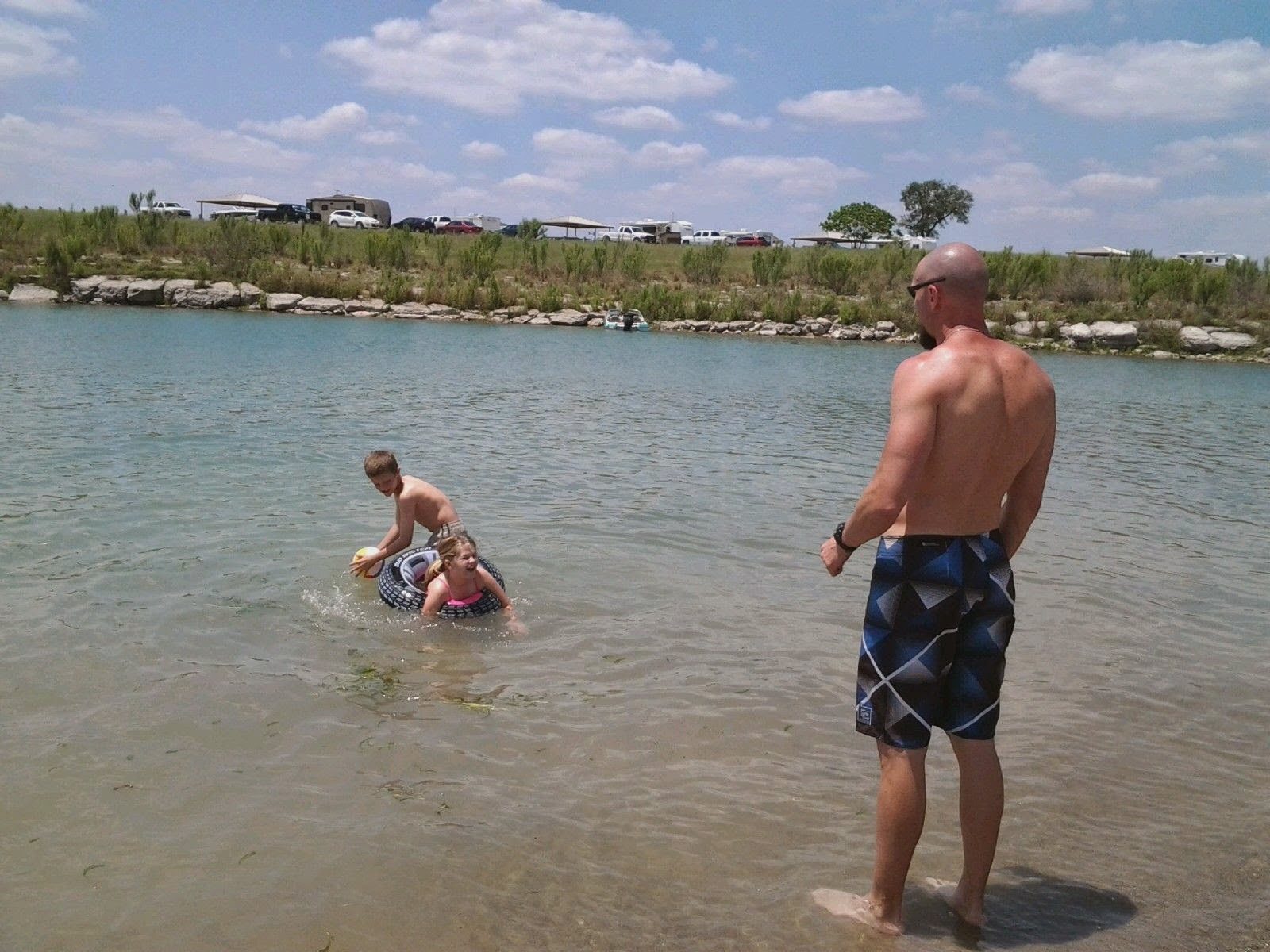 The kids rode their bicycles and kept pretty busy all weekend. Saturday night, we had another campfire with marshmallows so it was a pretty successful weekend after all. The weather was perfect. Sunday afternoon, the tent came down and everything got stowed away. Steve and Helen took the grandkids back to meet their Mom in Marble Falls. The longdogs and I took a nice long walk and visited with some of our camping neighbors before heading to bed.

Monday morning I finished tearing down the campsite....not much left to do there, cleaning the RV inside, and hooking up. I thought about staying for several more days but with at least 40% chance of rain every day for the next 10 days (several 80-90% chances), I decided to head home and get things put away before the rain hit.

The Traveling Longdogs and I are already eager to head out again and we just got home two days ago.
by TravelingLongdogs Posted 5/06/2015 04:30:00 PM 2 comments:

We are having beautiful weather for the next 4 or 5 days so I hooked up the RV and brought it home on Wednesday. Thursday morning we were off to Potters Creek COE Campground. We picked this site because the kids and grandkids want to put up their tent and sleep in it. We were going to do it two weeks ago but rain intervened.

Anyway, the Traveling Longdogs and I arrived out here about lunch time. The gate guard said go on in and find a site, set up then come back up and register. So that is what I did. Found a very nice site, checked it out thoroughly to make sure someone wasn't just off dumping the tanks. It was completely clean and empty. I got us backed in, unhooked from the truck and hooked up to the utilities. I leveled us up and opened the slides. I decided that I would run back up to the gate and pay up before setting up the inside.

That's when it happened......the gate guard told me I must have the wrong site as that number was taken until Tuesday. I told him there was someone in the next site but this one was definitely empty with no signs of any occupants. He said no, it is rented and they may have gone somewhere for the day so I would have to move.   Seriously????????  He was rather gruff which didn't help....a woman was at the gate when I came in. He said I would have to pick out another site and move as he couldn't let me stay when it was already rented.  Talk about an unhappy camper.....that would be me.....and it was getting warmer by the minute.  So back I went. I talked to two other campers parked nearby. One hadn't seen anyone there. The other said that there was a small RV with a black car that pulled out that morning. View

I pulled the slides in, unhooked the utilities, and hooked up the truck. In the meantime, the Traveling Longdogs have been waiting patiently in the truck the whole time. We drove around again and found a couple of other sites. I went back up to the gate and was going to pay for one but had some concerns if I could get into it with the branches hanging down. I asked if I could change the site if I couldn't get into it. The lady was once again at the gate and told me just to go and park and come back. I asked her if she would still be there when I came back and she said yes. I said the man hadn't been particularly nice about what happened especially since it was not my fault. She said he mentioned that I had been upset and they were both really sorry and realized that it was not fun to set up and then have to move.

Back I went and I did manage to get in the site I wanted. Budget dollars being down, branches haven't been trimmed for some time and they really need it. I was almost set up when the gate guy pulled up. He said he felt really bad about what happened and wanted to know if I was getting set up okay. He seemed sincere and I know it wasn't their fault.  I told him that other than the branches which really needed trimming, there was only one thing wrong with the site. I asked if they had recently done electrical work on it.  He said no, not recently. And then I remembered that I was out here last year when they did some work on that post. I already checked it out and it worked fine but they put the outlet for 50 AMP in upside down which made it rather a hassle to get my surge protector to fit in there. He looked and said....."yep, that is definitely not right. I'll put a work order in on that to get it fixed. Wonder why no one told us before." As soon as I finished, I headed back up and paid for four nights. Now to relax! 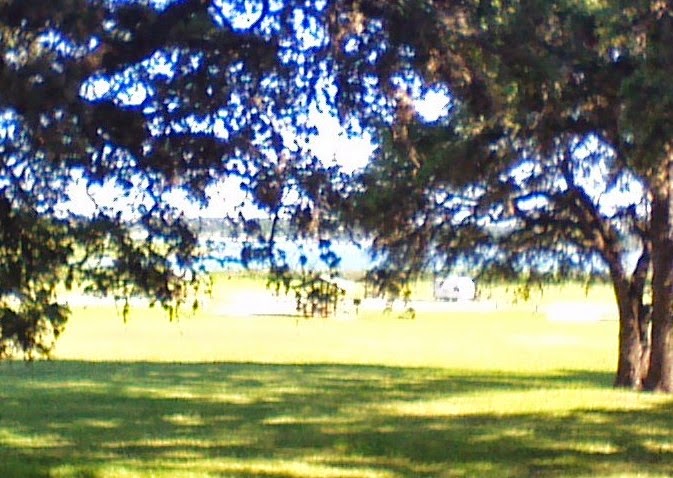 And here are the Longdogs relaxing...... 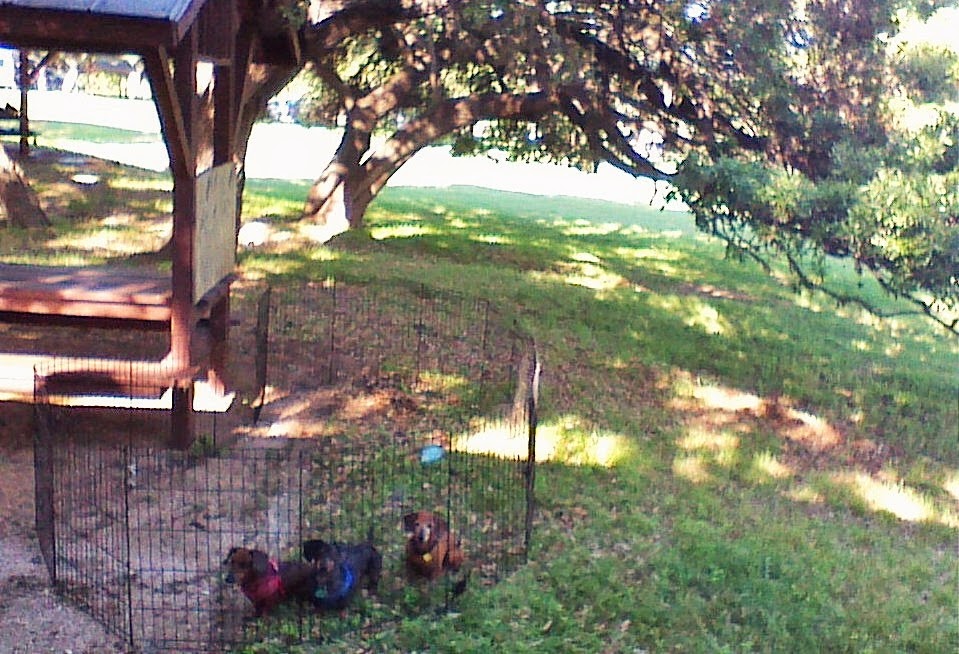 Oh, by the way, this all happened yesterday. We had a great afternoon, evening, and night. Guess what......my first site is still vacant. For whatever reason, the couple in there left and failed to check out or leave their car pass at the gate when they left. Must be experienced RVers......like two days worth of experience. They did pay for the site, it wasn't the gate guards fault, but they sure caused another camper a lot of extra work.
﻿
by TravelingLongdogs Posted 5/01/2015 10:27:00 AM 4 comments: