The next day was another great travel day.  We stopped at roadside parks and, I think I already mentioned it, but Willy Gretchen, and Harley are great travelers.  They like the songs on the radio if I like them and they don't mind at all if I sing along.  They can take naps anywhere and anytime.  They enjoy stops at roadside parks.  You do have to be a tad careful when you stop though as they are very enthusiastic about whatever they do so when you open that door, they are ready to get out so you better be ready with the leashes.

Just before supper time, I started thinking that it would be really nice to stop at a Cracker Barrel.  Sometimes they even have places you can spend the night.  So we kept our eyes open and a couple of hours later, we saw the sign.  Once we found the exit, we had to make a couple turns to get to the restaurant.  Up close it was easy to see that even a large car would be crowded in that particular parking lot.  The was a Sam's Club a block further on so I parked there on the far edge of their lot in a row behind about 5 other RVs, walked and fed the dogs, and headed over to Cracker Barrel. 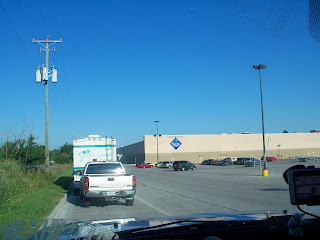 Looked good to me.  What do you think?  It was much cooler since we were further north so it promised to be more comfortable than last night.  After a quick shower, I was ready for bed.  Hmmm! What is that noise?  It appears that I didn't have to worry about the store being closed and no security as there was a street sweeper cleaning the parking lot.  Oh, well--the ear plugs worked great.
by TravelingLongdogs Posted 7/09/2010 07:57:00 PM