Serendipity and I headed out to our first rally on a Thursday morning.....okay, it was almost noon. This time I was more or less ready in plenty of time but my friend Mary Jane was traveling with us and her RV didn't want to start when she was ready to roll. A friendly neighbor in the RV park she was staying at got her jump started after a few challenges. She stopped at Autozone thinking she needed a new battery but they tested it and said it was fine so we were off. We elected to take the backroads as we only had about 110 miles to go before we would arrive at Splashway RV Park. 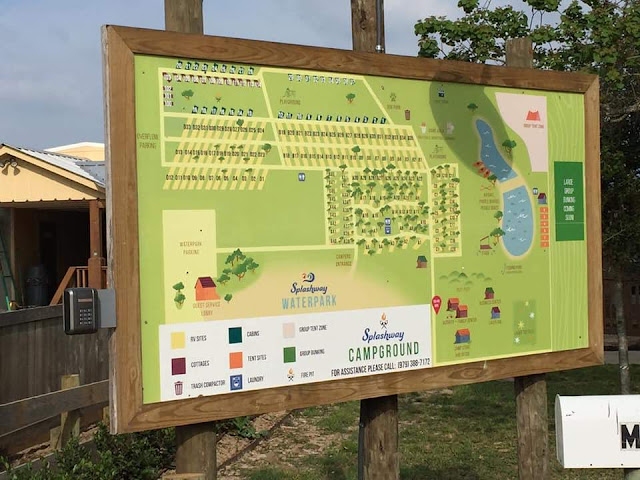 Upon arrival, we found out that there isn't a lot in Sheridan TX where Splashway is but we were there for a Texas Ramblin' Roses Rally. The water park part of Splashway wasn't open but we didn't care about that....indeed, it might be considered a benefit for our purposes. 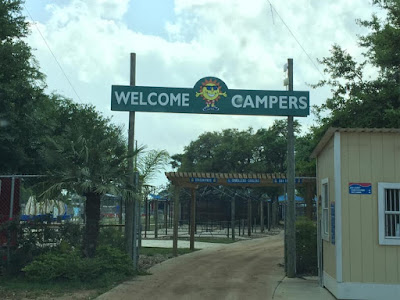 The park treated us really well right from the start. They provided coffee service every day. 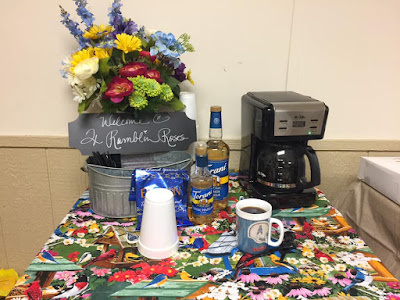 Mary Jane and I were the second and third RVs to arrive on Thursday. We found ourselves in two different sections of the park since I had requested a pull-through for my 5th wheel. After taking a quick look at the pull-throughs out in the sun and the nice shady area where Mary Jane was setting up, I made a quick trip to the office and asked if there were any sites open she was. No problem, choose anyone between 5 and 11 as they were also reserved for us. Nice! 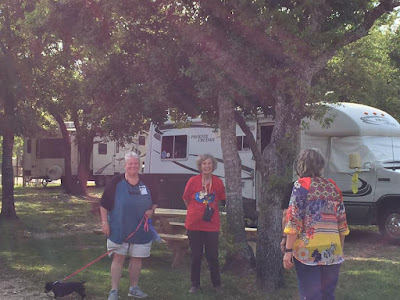 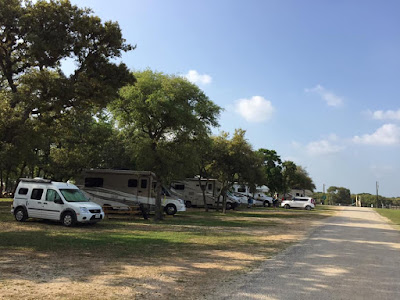 The office ladies were young but very efficient and helpful. There is also a store attached and they will have an on-site restaurant later in the year. As it was, we had full access to their huge kitchen during our rally. 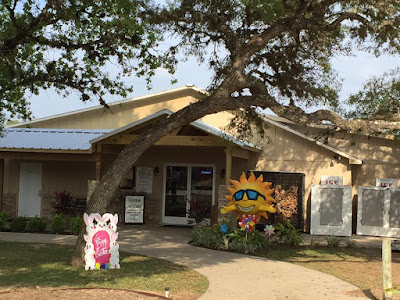 Lots of visiting was going on Thursday and Friday as more and more women arrived. 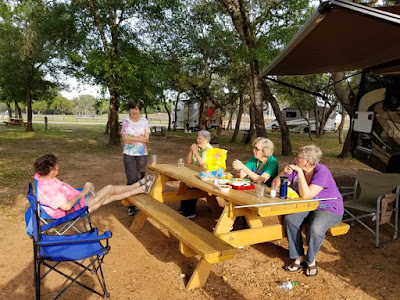 While there isn't a lot to the town of Sheridan, the same cannot be said about Splashway. There is more than enough to keep anyone busy even while the water park is not open!. Fishing ponds.... 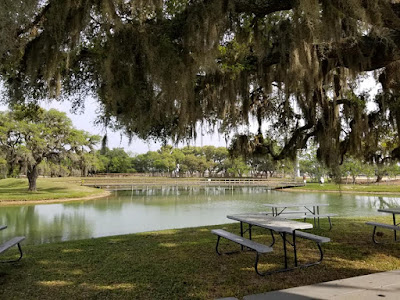 Chess anyone? They also had checkers in giant form, sand volleyball, hiking, kayaking, outdoor movie screen, bean bag toss, tetherball, and the list goes on. I should also mention that they have cabins for non-RVers. 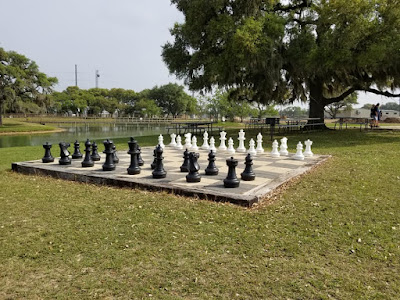 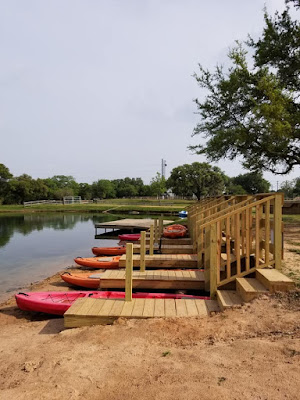 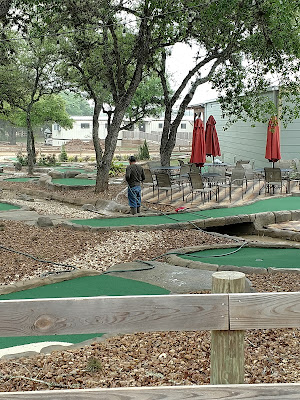 Friday, many of those who arrived early made a trip into Columbus for lunch at Schobels. They have a great buffet but you can also order off a menu. 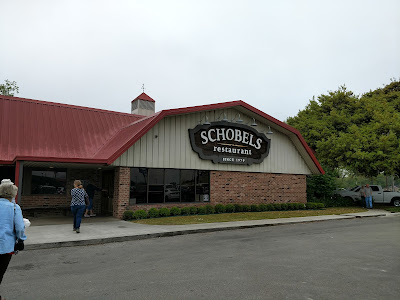 We even managed to get tables together without reservations which was a surprise since they were very busy. 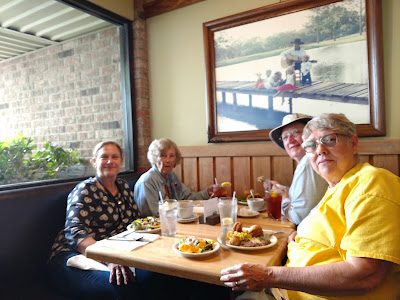 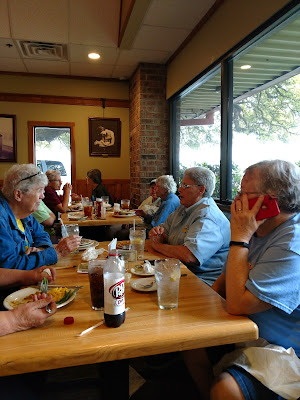 Friday night we had a hot dog roast in the giant fire pit. The park built a fire and left us to it. 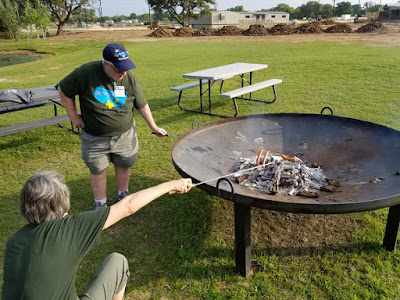 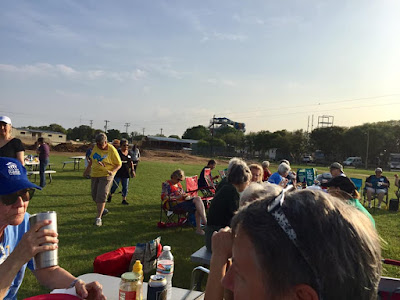 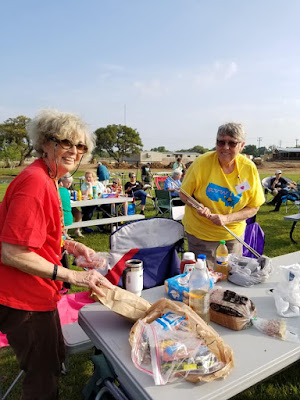 I almost forgot the outdoor movie screen and movie that some of us watched on Friday night. Fun! 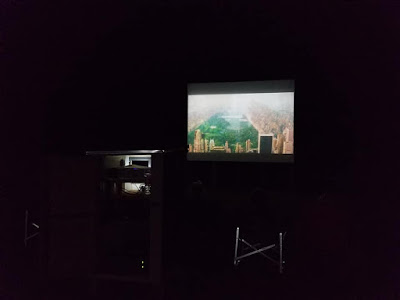 There was lots of visiting, card playing, and game playing. 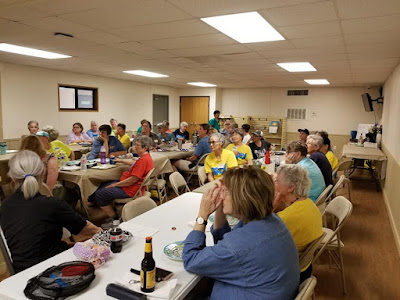 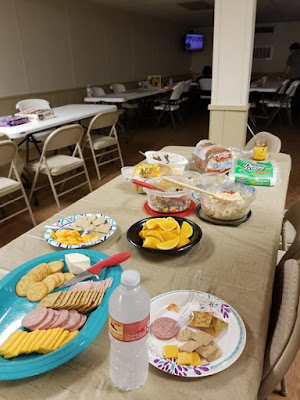 We even managed to use a little device to project the training for the new RVW website from my computer to the TV screen. 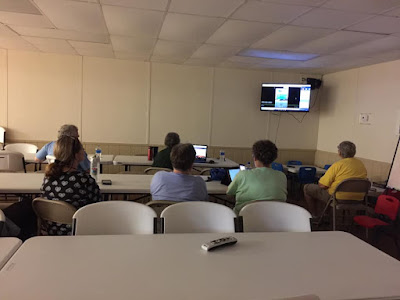 And, of course, there was a potluck. 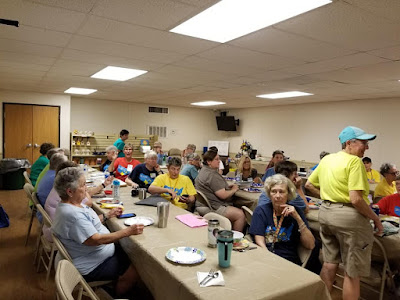 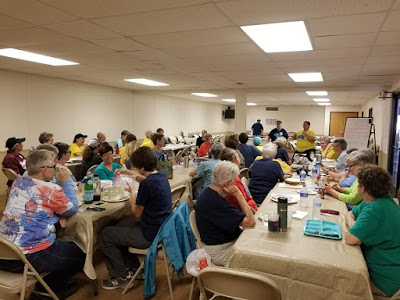 We even managed to have our 50/50 drawing when the office dug up some tickets we could use since we found ourselves without them...….stuff happens. 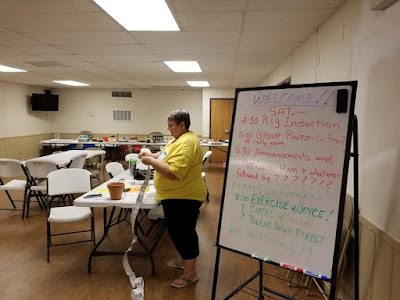 Sunday afternoon, a number of us that were staying until Monday went to visit the Whistling Duck winery. 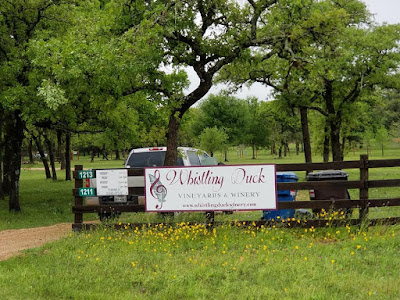 We sampled some good wine and then enjoyed their patio overlooking the vineyard. 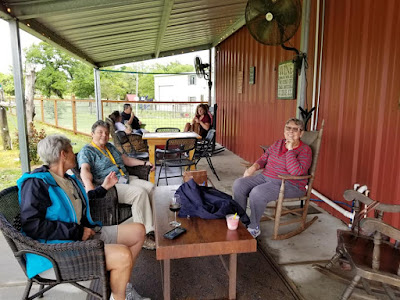 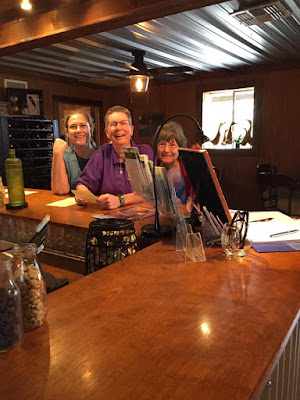 I should also mention that a number of our group made the trip to Shiner TX on Thursday to visit the brewery that makes our famous Shinerbok beer. Don't have a picture of that. Also want to give credit to Carolyn Patin for most of the pictures for my blog. She captures everything so well and is willing to share.  Monday, we were off to Gulf Coast RV in Beaumont for an overnight on our way to another rally in Eunice LA.