There really isn't much other way to say it. Arctic weather descended on all of Texas last weekend. We had unprecedented cold everywhere. North Texas and the panhandle are used to cold and snow. The rest of us are not. We do not have snow equipment, salt, etc because it just isn't needed.

Many places have been without electricity since Sunday and are just now getting it back even here in San Antonio and Houston. It is a checkerboard of what works and what doesn't. Here in Schertz, at least at my house, we had rolling power outages since Monday that ended yesterday. It was normally 2 hours on and 40 minutes or so off. Not too bad and very manageable. Most of the homes around here are all electric so when you lose power, you lose everything. Our house is well insulated and never dropped to cold temps that a jacket and blanket didn't take care of. Frozen pipes was another big issue.

We got a call from a neighbor yesterday morning who is up in Wisconsin with relatives. They covered all their outdoor faucets but forgot a stand alone faucet in their yard away from the house because they never use it. Well it froze and broke. People feeding their dogs and cat were running faucets in the house but couldn't get the water turned off to the house. My DH went over and shut the water off at the main and was able to cut the pipe off and cap it (after the second try). Really unbelievably cold....down to single digits and night.

We never had any water problems as our kitchen is not on an outside wall and DH covered our outside faucets as soon as we heard that cold was moving in. Snow of any kind even a dusting is a very rare occurence here. 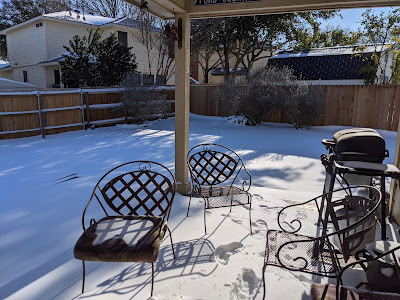 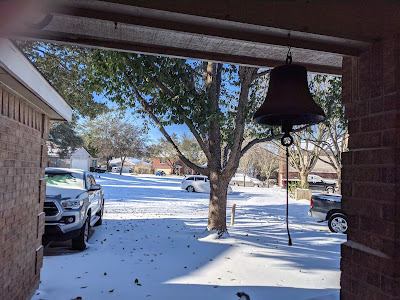 Dave shoveled the patio and a 6 by 6 area of the backyard for Harley to go outside. As you can imagine, Harley was not in the least excited about going out. He held it as long as he possibly could. Dave had to resort to throwing the ball out to get him off the patio. Pupper just can't resist a ball! 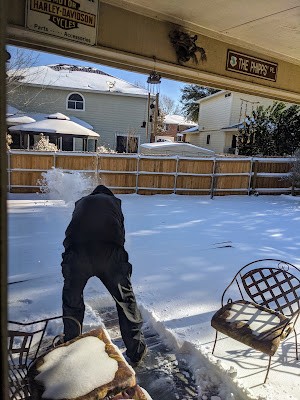 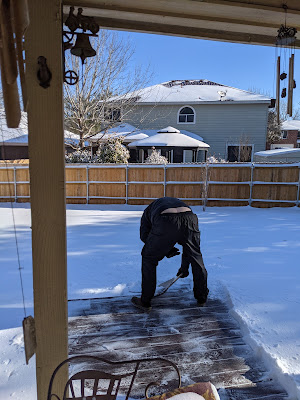 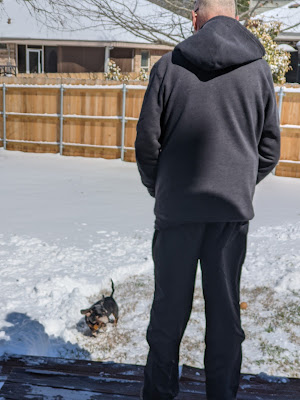 Snow is finally melting today because the sun is shining. Don't know if it will all go though so freeze tonight means icy roads again in the morning.
Today was the first day we got mail since last Saturday. Thank heavens Fedex and UPS still managed to make their deliveries as Dave had medicine enroute. I know that some areas might have been undeliverable but with fast food places lined up with customers, it is kind of sad that the post office delivered no where for a week.
HEB did not open at all the worst day after announcing they would only be open from 12-5. It was really bad then. Right now the grocery stores are out of so many things especially perishables of any kind. People started complaining about others hoarding but my friend's DIL works at Walmart and they had to throw out 3 semitruck loads of perishables because they were past the sell date. She asked if they couldn't have donated to Food Bank or others who needed. The DIL said they have done that in the past only to be sued by someone who said they got sick. 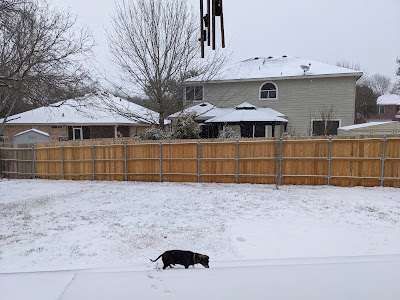 This photo is from the first go round of snow. We had several snowfalls. DH still goes out and does his walks but our vehicles haven't moved since last week.
Thank goodness I winterized my RV when I came home from the last trip in December. Hopefully it will be okay. Supposed to be 73 on Wednesday.....I can't wait. That is my kind of winter weather.