Saturday was a busy day. We started with coffee and visiting. Oh, should have mentioned we did that every morning. It was so hot that the rig christening was moved from afternoon to morning. Anyone with a new or new to them rig can have it christened. They tell everyone about their rig and wish their future travels all be safe and fun. Balloons filled with water used to be used but now the president of the chapter uses a water gun. It's just a fun thing to do. 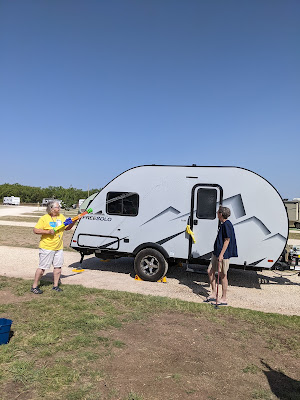 Next we had a cooking demonstration from Olivia. She loves to cook whether at home or in her RV and she is a great cook. She shows how easily everyone can eat well while traveling. Saturday's demonstration was spaghetti with meat sauce all cooked in an Instant Pot. She has the umbrella sitting there on the table to simulate how you can cook in quite a small RV kitchen. She browned hamburger in avocado oil and added half a cup of water before scraping the bottom free of any meat that was stuck. She advised using lots of seasoning when cooking with a pressure cooker which is what an Instant Pot is. Then she added the jar of spaghetti sauce. Next she added half cup of water to the spaghetti jar which was shaken to get all of the sauce and poured into the pot. 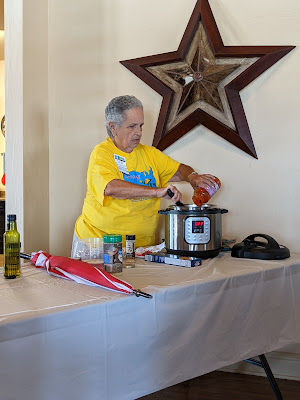 Finally, the pasta is broken in half and arranged like pickup sticks pointing in all directions. then the remainder of the water is added. The pasta can be pushed down but should not be stirred. 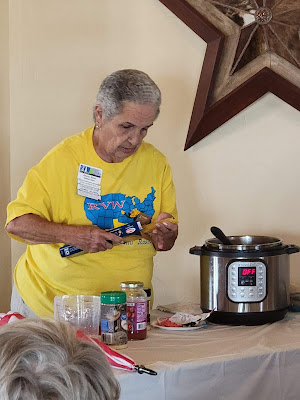 The pressure is set on high manually and the timer set for 8 minutes. The 8 minutes starts once pressure is reached. A quick release at the end of the cooking time left us with delicious al dente pasta. Olivia stirred it and let it site for a couple minutes so it thickened to just the right consistency. We all had healthy sized samples and it was delicious. 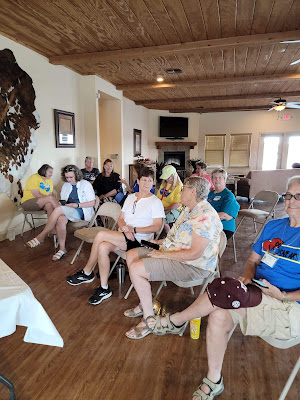 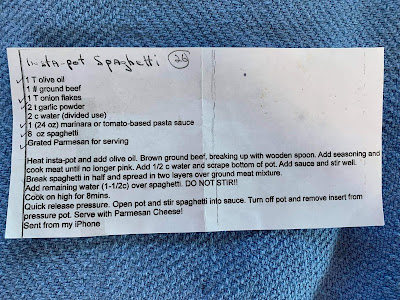 Later on we all met back at the rally room for the group picture followed by a potluck dinner. THe Hosts provided fried chicken with mashed potatoes and gravy while everyone else provided sides or desserts. It was all delicious. My sister-in-law Elaine joined us for the potluck as well as the rousing game of jeopardy we played after. this was one of our smaller rallies which was a nice change. 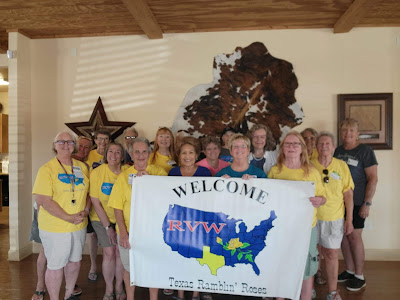 Brenda's homemade jeopardy categories and questions are always challenging but everyone ends up with a prize after the winning team gets done gloating. 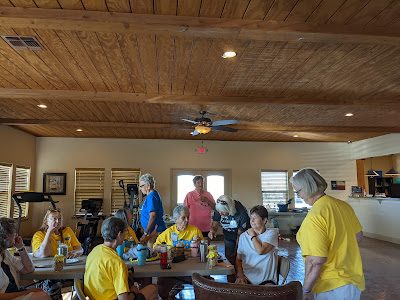 After the formal part of the evening was over, some of stayed to play Rummikub for a while. 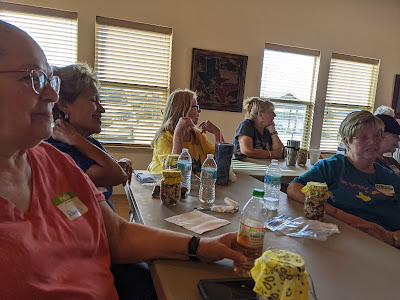 I know the group had a good time Sunday but I got up at 5:45AM and pulled out of the park at 6:15AM to drive home in time for a late lunch on Father's Day. I had the car all hooked up on Saturday night and the water unhooked so I just had to run the car program, put things away inside, and bring up the jacks. The trip home went very smoothly and lunch with the family was great.
by TravelingLongdogs Posted 6/19/2022 07:33:00 PM