A few days ago, I found myself with quite a ruckus going on in the backyard.  The longdogs and I had words about it but the noise didn't stop.  So I was forced to go outside to the site of the ruckus.  Everyone on the ground was carrying on.  The dogs on the other side of the fence were also carrying on. 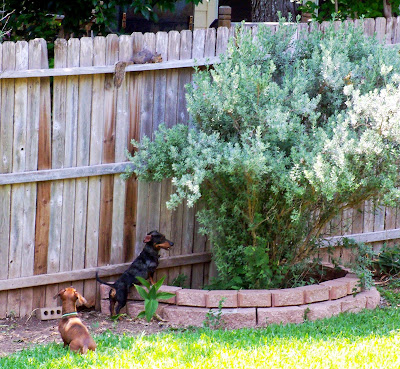 No one would listen to reason.  This is very unusual.  The rules of the game were definitely being violated.  Normally, the squirrels tantalize and the longdogs chase.  Very little barking is involved.  Gretchen and Willy were 10 last month and Harley will be 5 in July.  I have to tell you, Gretchen is the fastest.  She can fly across that yard faster than you can imagine.  But, as I said, there are rules to the game.  If the squirrel isn't as fast as he thinks he is, I have actually seen her put on the brakes and come to a screeching halt.  The game is only to chase, never to catch.   This squirrel just wasn't playing by the rules, he just sat there.  Gretchen finally came when I called her because she just hates to get in trouble.  So I brought her in the house.  The boys, on the other hand, were not coming willingly.  So I headed back out to get them.  And still the squirrel didn't move.  I brought the boys in the house one by one.  And still the squirrel didn't move.  This was not good. 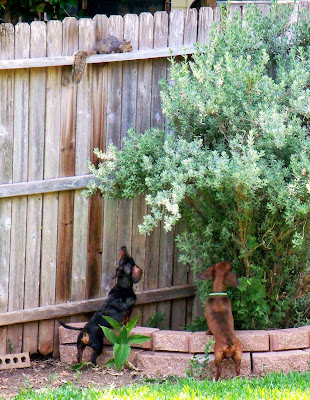 So, this was why the squirrel is not moving.  He looked really bad, I mean really sick.  I came back in the house.  Good thing DH was coming home in a while.  I checked a while later and the squirrel was gone!  Oh, oh, definitely not good.  I checked my whole yard then I told the neighbors behind me and they checked their yard.  I went next door and told my other neighbor she needed to check her yard before her dog went out there.  She definitely didn't want her dog finding that sick squirrel.  She didn't want to be the one to find it but fortunately, my DH arrived home just then.  He said he would go over and look but he figured the squirrel just ran away.  I knew that squirrel didn't run anywhere; he might have crawled but he didn't run. 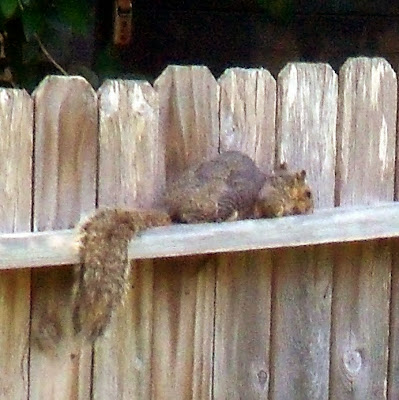 The squirrel was just on the other side of the fence.  He wasn't going to be running around anymore so DH scooped him up and got rid of the evidence.

So far, no other sick squirrels have been sighted and Weeniedog land is safe once more for fun and games.
by TravelingLongdogs Posted 5/20/2013 08:12:00 PM