Once we left Apalachicola, we didn't have a very long drive to our destination.  We went across a long bridge and passed another much longer bridge that led out to St George Island.  I understand that there is a very nice state park on the island with great shelling possibilities but we had another stop in mind. There is a great program called "Tents for Troops" which is for active duty military and their families.  Numerous RV parks and resorts across the country have volunteered to donate a free couple of nights of camping to this program.  We were guests of the Carrabelle Beach RV Resort which is an RVC Outdoor Destination. 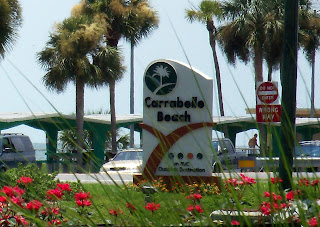 The resort is very nice and so were the welcoming staff members.  They gave us a very nice back-in campsite with a level concrete pad and attached picnic table area.  We had full hookups with 50 AMP power and cable TV and the site was long enough to leave the truck attached and park the VW wagon crosswise in front of it. 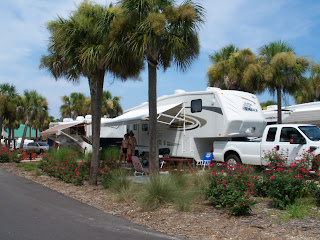 The sites were decently spaced out.  The only problem we ran into was that the cable TV connection was near the front of the site and our cable hookup near the back of the RV.  The RV neighbor right behind us asked if I needed a cable.  I have two fairly long cords but neither would reach.  He reached into his RV tool box and came up with an extra connector.  RV people are great; he said "keep it and just pay the help forward sometime in the future."  The resort had a swimming pool, lounge (with kitchen, TV, fitness equipment, books, and games), a laundry area, decent bathrooms, and a small store.  They also have some cabins for rent. 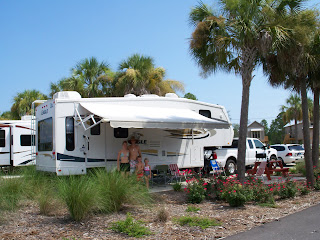 This was our view from the door of our RV.  You can see the ocean beyond the pine trees. 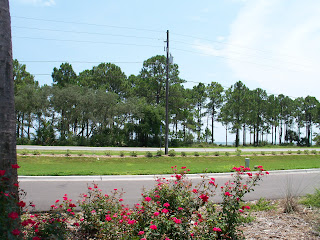 The resort was located on the inland side of the highway with a beautiful public beach right across the road.  The traffic is not heavy in this area so we never really noticed any road noise. 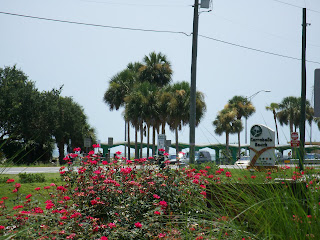 These were a few of the homes just down the beach.  Most of them had large, screened porches.  The only issue we had in this area was gnats when there was no breeze. 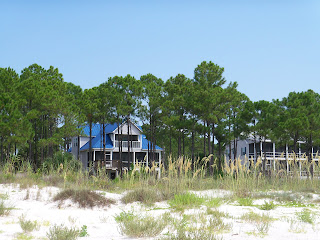 We played in the pool and later on we grilled hot dogs for dinner.  Cameron was relaxing in the shade of the palm tree. 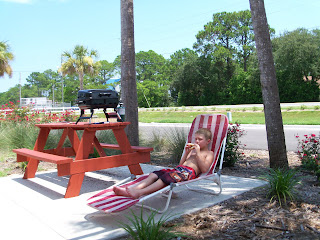 Helen used a fork for her "dogs" instead of a bun. 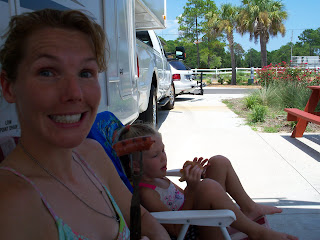 Chef Steve put the hat he bought in Apalachicola to good use both while he was grilling and later at the beach. 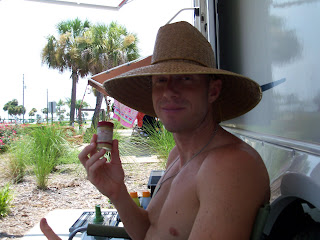 As you can see, we had plenty of beach to ourselves.  Steve and the kids were busy looking for shells while Helen was doing her training program by running on the beach. 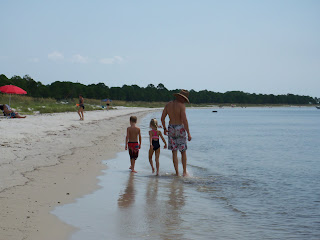 You can see some islands far out in the distance.  We all swam for quite a while.  We saw several dolphins out further in the bay.  The kids had a ball looking for shells and digging in the sand.  We did see a couple of very small jellyfish before we left but it was quite easy to avoid them as the water was very clear and you could easily see them from a distance and avoid them. 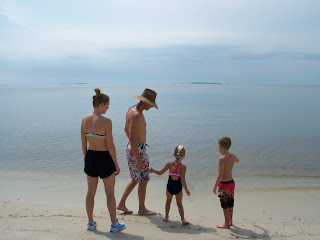 This is one of the little creatures the kids got to see.  We also saw little tiny shellfish that the surf would uncover and got to watch them scrambling down into the sand so quickly you really had to be watching closely. 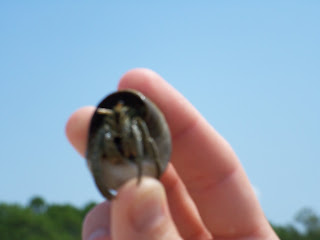 Here are the troops relaxing in the RV.

Harley quickly found a hiding place while the beds were being made up.  Yes, Loretta, you were right; the RV does have weeny dog colored upholstery.

The "kids" were asleep within minutes of hitting the sheets.  Willy and Harley "love" camping.  Willy prefers to share the pillow whenever he gets the chance.

After two nights of enjoying this great place, we were on the road again.  Right after leaving the resort, we were in the town of Carrabelle which is a small fishing village located on the eastern side of the panhandle. 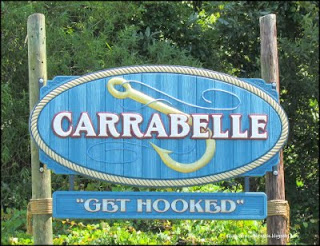 They have a nice Veteran's Memorial along the side of the highway right in the middle of town. Carrabelle is a small fishing village located on the eastern side of the panhandle. Carrabelle’s one claim to fame is that it's home to the world's smallest police station.  It looks like a phone booth but the truth is that there's not even a phone in it anymore; however, no other town can claim to have had its police force operating out of a 4-square-foot office.  Carrabelle's police officers used to answer calls using a phone hanging on the side of a downtown building until 1963. The officers would get wet during bad weather and sometimes others would use the phone to make long-distance calls with the city footing the bill.  The old booth was donated to the police when the phone company replaced a phone booth in town and the call box was moved into the phone booth.  The dial had to be removed from the phone to stop their biggest problem, people sneaking in and using the phone. 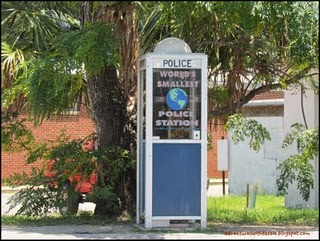 You'll find the "police station" located on the left side of the road not far past the Veteran's Memorial as you head east.  If you see the gas station on that side, you missed the phone booth.
by TravelingLongdogs Posted 7/31/2011 11:19:00 PM