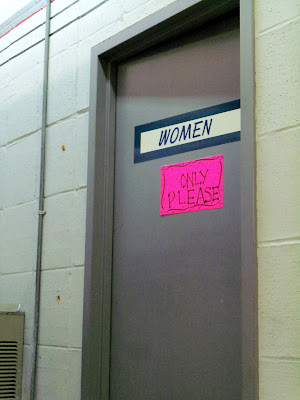 Didn't you find that a little strange?  It's in a business store.  My friend and I were commenting on it when the cashier came over.  Unbelievable....they had to post it a couple of weeks ago because they noticed several couples come out of the restroom over a period of days.  This is a small to medium size retail and service store.

On to my adventure with the refrigerator.  I picked up the RV yesterday afternoon and headed down to Texas RV Supply to have the doors adjusted.  It's a Norcold.   Well, the technician had to take the doors off to adjust them and found that the corners of the doors, both of them, were separated.  No way to put them back together.  Once they slide those wooden panels out, the doors weigh very little but those panels are heavy. 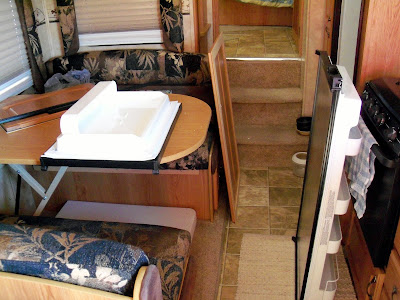 I have a service contract with Jayplus.  The manager called them.  It took some time to get the next available representative but once we did, he had a couple of questions for the manager and approved the replacement of both doors and labor.  I just had to pay my deductible.  Texas RV Supply had the doors in stock in their warehouse so they sent someone to get them.  I asked if the panels caused the problem because they are real wood.  He said it was possible but felt that I probably had just gotten some bad doors.  I sure hope he is right. 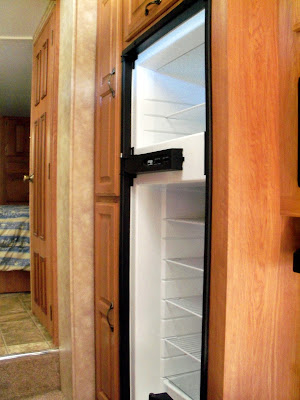 I wasn't happy with the initial fit because the latch opened way too easily.  I've never had my fridge come open and I'd like to stay with that record.  The manager came out and adjusted it himself and it was much better.  I still had a concern about how easily a dollar bill slips out from the seal so the manager called Norcold to see if there was any other adjustment possible.  We waited on Norcold who is now owned by Thetford for about 15 minutes and then the phone hung up.  So he called again and we waited another 10 minutes before we got a "technician".  He asked her about adjustments and she said she would check.  Then he asked her another question and she had to "check" again.  Translation, she was a receptionist or phone person and not a real technician.  She came back and told us that the seal just needs time to settle in to the new door.  She recommended waiting about three weeks and then, if there was any problem with frost in the freezer or condensation in the fridge, to let them know and they would send a spacer kit.  Three weeks, hmmm, that might work for a full-timer but not for a part-timer.  He asked her about the spacer kit--it's some washers you put behind the seal.

So the manager and I agreed that I would use the fridge while I am out in the RV for the next week.  If there are any problems, I will bring it back in and he will be back on the phone with Norcold.  Okay, I can live with that.

Overall, I was pleased with the service I received at Texas RV Supply.  Oh, and let me tell you what else I found there.  I scored a 50 amp to 30 amp reducer.  Now you say, you can find those anywhere.  Ah, but this 50 amp plug fits the socket in the RV not the one at the end of the 50 amp cord.  Nice.  I know a few people who have gotten them but they had to order them through the dealer.  That was definitely a find and I snapped it up as there was only one.

I'm already benefiting from it by using it plus my 30 amp to 15 amp reducer so I can have the fridge running to cool off overnight in my driveway.  It will be great not having to coil up that really heavy 50 amp cord before I take off in the morning.  Thanks Texas RV Supply. 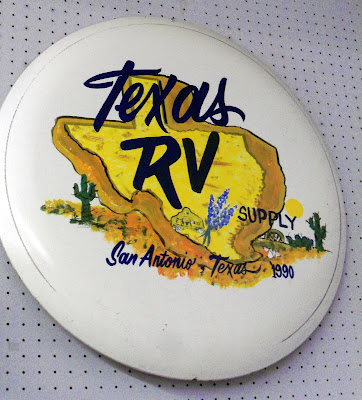 I'm headed out in the morning to a Pink FlaminGoes Flocking with a large group of other women RVers.  Everything is loaded except the fridge and freezer items.  Can't wait.  See you later.
by TravelingLongdogs Posted 10/29/2012 10:41:00 PM